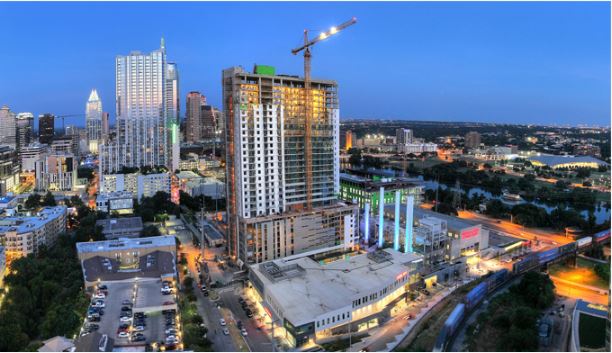 At more than 65 years old, no one expects the Seaholm Power Plant in Austin, Texas to still be producing electricity. But after being dormant for for decades, it might be surprising to learn that it’s now producing new economic power for the city, having been repurposed into residential, retail, and office space.

Located on the north shore of Lady Bird Lake in downtown Austin, it’s listed on the National Register of Historic Places and designated as a Recorded Texas Historic Landmark. The entire facility and site are being redeveloped into a mixed-use district. 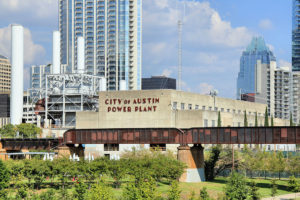 The plant was decommissioned on July 28, 1992, and the site sat nearly untouched for a decade. Its eight-acre landscape became overgrown and disheveled, a dead spot in an otherwise-thriving downtown. By 1997, the city was considering demolition, but a local citizens group organized to save the structure.

That’s when Seaholm Power, LLC stepped in, led by managing partner John Rosato. In April 2005, the team was selected to redevelop the full 7.8-acre site, including the power plant itself. The project was launched in 2013, and was completed earlier this year.

A master development agreement was reached with the city in April 2008 specifying the renovations and new construction that would be undertaken.[5]

The interior of the turbine generator building was converted to a mixture of office, retail and restaurant space, with tenants occupying the facility beginning in 2015. A residential tower called Seaholm Residences was constructed at the west end of the site, also opening in 2015. As of 2016 the city has not selected a final plan for the redevelopment of the water intake facility.

What is now more than 130,000 square feet of commercial space in downtown Austin was commissioned as the city’s new power source in 1948. At the time, post-war Austin had a population of roughly 130,000, and it was growing fast. In addition, new appliances like dishwashers and air conditioners were putting an added strain on the municipality’s already over-worked infrastructure.

The structure built to help remedy the electrical shortfall was a hulking, three-story Art Moderne building capable of producing 100 megawatts of electricity—more than enough to power the city on its own.

From the Seaholm, LLC website: Seaholm is a future urban oasis on the Southwestern edge of downtown Austin. An architectural gem built in the 1950s, the long-dormant power plant offers a unique opportunity to preserve a key piece of Austin’s past and unite it with the region’s vibrant future.

Thanks to a unique partnership with the City of Austin, Seaholm will combine cultural and community needs in an exceptional setting for residents and visitors to enjoy for generations to come. This $130 million re-development includes a mix of 143,151 sf of office space, 280 high-rise condos, 48,363 sf of retail shops and restaurants, and meeting space; all surrounding a dramatic and accessible plaza.

Imagine a place to live, work, play, shop, eat and sleep. Then imagine that special place on the shore of Lady Bird Lake, connected with a major intermodal transportation network and designed around a historic art-deco structure. This vision will become a reality with the transformation of the former Seaholm Power Plant site.

Once complete, the 5-acre site will feature a mix of office space, local retail shops, restaurants, contemporary condos, Traders Joe’s (your neighborhood grocery store) and an outdoor terrace that overlooks Lady Bird Lake. Such a transformation is also expected to create more than 200 jobs and produce $2 million a year in tax revenue.