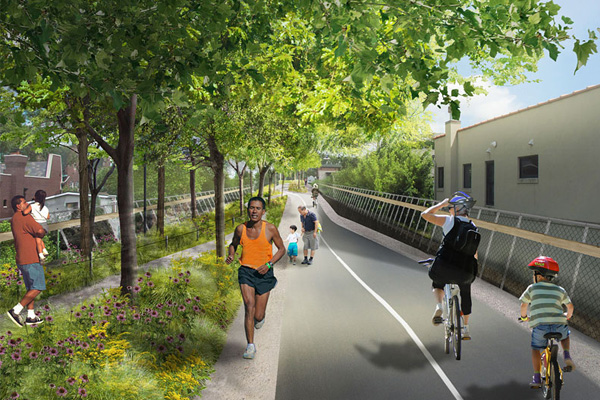 On an abandoned Chicago, Illinois railway line cutting between the treetops, bike commuters zip by walkers and joggers, all traversing a ribbon of concrete undulating through a lush landscape where clattering freight cars once ferried everything from coal to furniture.

This relic of the city’s industrial past is now a vision of its future. Chicago and cities throughout the country are transforming hulking pieces of obsolete infrastructure into useful — even inspiring — amenities: In this case, a park in the sky that doubles as an alternative transportation corridor.

Since opening in June, the nearly three-mile elevated path, called the Bloomingdale Trail, has changed how residents move through a section of Chicago’s northwest side that in many places is starved of parks and inviting pathways for pedestrians and bikes.

After decades of decline, American cities are getting creative in rolling out new green spaces to sell their brand. With little real estate to expand on, cities are turning instead to the wreckage of past eras: old rail yards, landfills, utility corridors and riverfront areas cut off by freeways.

Dallas built a deck over a freeway to create Klyde Warren Park. Virginia Beach, Virginia, turned a landfill into an expanse of lakes, hills, playgrounds and a skate park that it playfully calls Mount Trashmore. Savannah, Georgia, buried a parking garage to restore one of the original town squares laid out in the 1700s.

Dina Petrakis, a 57-year-old remodeling consultant, biked with her tiny dog, Lucy, poking its head out of a shoulder satchel. Petrakis mainly uses the Bloomingdale Trail to get to yoga class.

“I used to have to drive because you can’t really ride your bike over there. Streets are too busy,” she said.