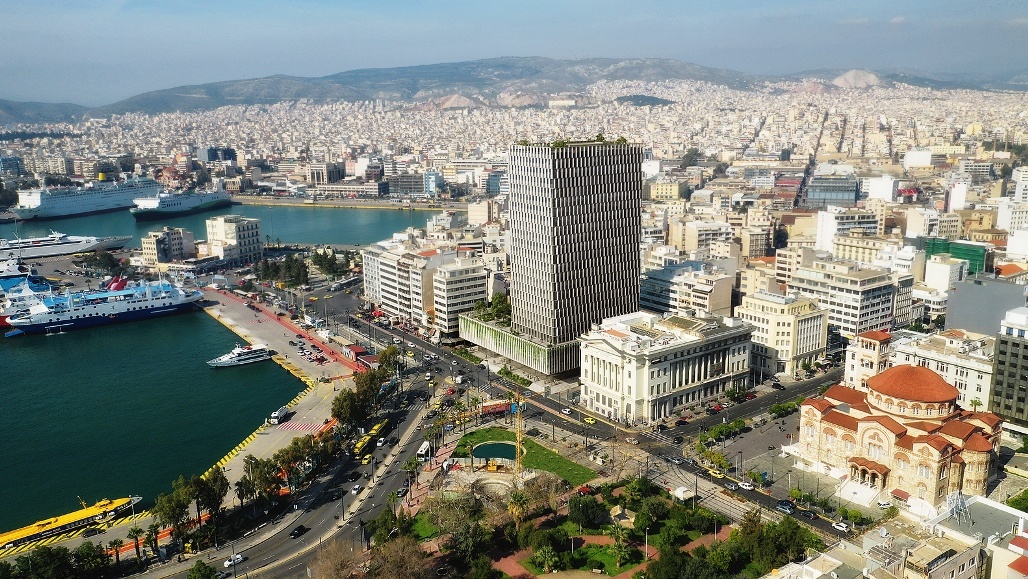 In Piraeus, Greece, an abandoned, office tower is the tallest structure in the Port of Piraeus. It’s also the second-tallest building in Greece, after the Tower of Athens.

With a height of 84 meters, its presence has dominated the image of the port for 44 years. 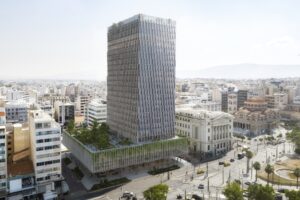 The failed tower designed by the architects I. Vikelas, G. Molfesis and A. Loizou, and was completed in 1975. But the interior has never been occupied, except for the first three floors.

In 2020, Dimand SA and Prodea Investments came to an agreement with the Municipality of Piraeus to transform the tower into contemporary offices, retail and restaurants.

Athens-based architectural firm PILA has been selected to redesign the facade of of the soon-to-be-revitalized Piraeus Tower. 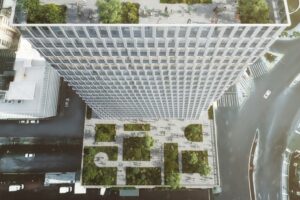 The awakening of the “sleeping giant”, as the abandoned structure is often called, coincides with the recent emergence of Piraeus as a vibrant contemporary urban neighborhood.

Besides being a global transportation hub, Piraeus is increasingly becoming one of the most exciting neighborhoods for living, working, and culture.

PILA’s approach for the design of the new facade is to transform the structure of the tower into a dynamic landmark that reflects the vibrant energy of the aspiring district of Piraeus.

The proposal envisions a structure that is visually intriguing and incorporates strategies in order to drastically reduce the energy consumption of the building.

Here’s what the designers say about the project: 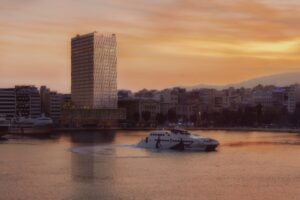 The facade is conceived in order to integrate the structure into the daily life of the city and to enhance the lives of citizens and the users of the building. The design mediates the scale of the city and that of the tower, engaging the prospect of offering welcoming exterior spaces and sharing breathtaking views.

A shading structure consisting of vertical and horizontal overhangs clads the volume of the tower. Each vertical fin is horizontally displaced from one floor to the next and creates a spring pattern that wraps around the building.

The pattern appears to gently slide from one facade to another, with the resulting visual effect of the facade wrapping the tower as a piece of fabric. This dynamic pattern appears different from various locations, creating a rich visual experience that is constantly transforming depending on where one is standing. 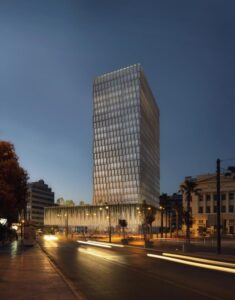 To further emphasize the movement of the facade, the vertical fins rotate as they rise toward the top of the structure. The rotation of fins is tuned to optimize the shading performance of the building and amplify the panoramic views the property offers.

This approach allows for a specific treatment of each facade depending on environmental requirements and view opportunities but also ensures a unified treatment of the volume.

The design of the facade overhang system is a result of an ambitious sustainability and energy conservation strategy.

After a meticulous solar study, the vertical and horizontal louvers of the tower are calibrated in order to reduce solar gain on the facade by 50% resulting in a 20% reduction of the overall energy demand of the building.

All images courtesy of PILA.