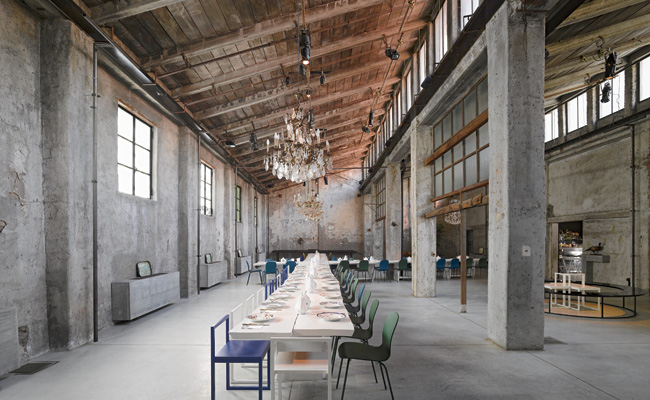 Tanja Solci says Carlo e Camilla in Segheria, the Milan restaurant she opened last year is “all about irony,”.

From its name—translated to Charles and Camilla, of royal British fame—to its location (segheria is sawmill in Italian), nothing about this dining experience is straightforward.

The building had been around for nearly a century, and, in the hands of Solci’s grandparents, was operated as a sawmill from the end of World War II through the 1970s.

After letting the industrial facility sit vacant for decades, Solci’s father—also, not coincidentally, named Carlo—entertained offers from the likes of McDonald’s and Dolce e Gabbana to rent and refurbish it.

But the scion convinced Carlo to hand the structure over to her and, in 1999, oversaw its complete restoration.

“I was in love with the atmosphere,” recalls the youngest Solci, still in her 20s then. “The idea was to stop time.”

Treating the neglected facility as if it were an “important historic building,” according to Solci, restorers painstakingly cleaned the masonry walls and replaced the wood roof.

The resulting restaurant is less an architectural achievement than a brilliant work of scenography.