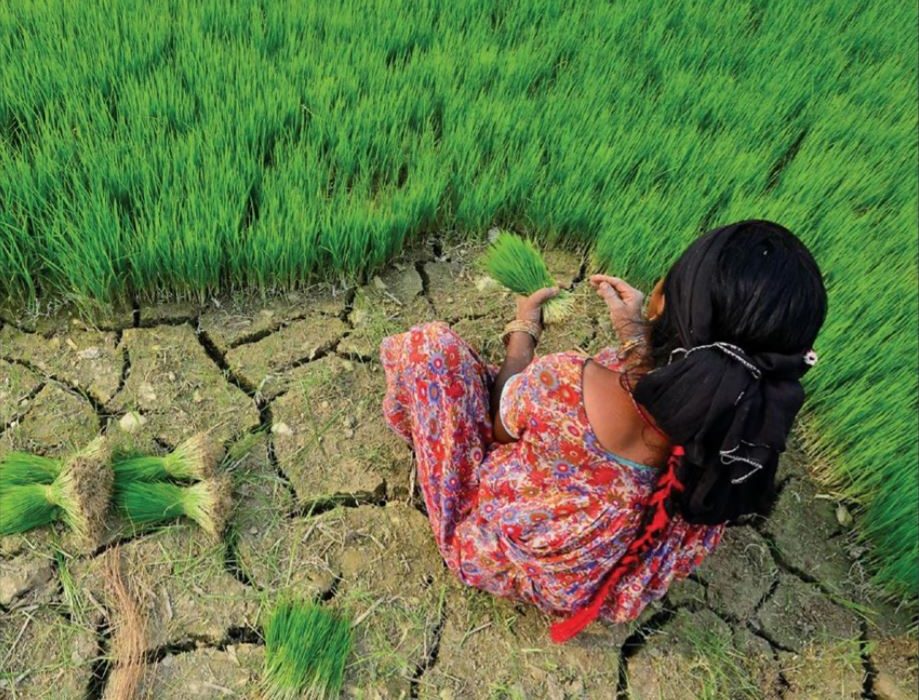 A report entitled Adapt Now: A Global Call for Leadership on Climate Resilience was released on September 10, 2019 by the Global Commission on Adaptation to launch what they are calling a “year of action”.

The report calls for a revolution in understanding, planning, and finance to make climate risks visible, and incorporate these risks into all decisions. Further, it calls for political leadership to shake people out of their collective slumber.

It was commissioned by members such as Ban Ki-moon, the Secretary General of the United Nations, Bill Gates, Co-chair of the Bill and Melinda Gates Foundation, and Kristaline Georgieva, CEO of the World Bank.

The report specifically finds that investing $1.8 trillion globally in five areas from 2020-2030 could generate $7.1 trillion in total net benefits. Essentially, failing to seize the economic benefits of climate adaptation undermines trillions of dollars of potential growth and prosperity.

From the Executive Summary of the report:

Climate change is one of the greatest threats facing humanity, with far-reaching and devastating impacts on people, the environment, and the economy. Climate impacts affect all regions of the world and cut across all sectors of society. People who did the least to cause the problem—especially those living in poverty and fragile areas—are most at risk.

The costs of climate change on people and the economy are clear. The toll on human life is irrefutable. The question is how will the world respond: Will we delay and pay more or plan ahead and prosper? The Imperatives for Accelerating Adaptation Accelerating climate change adaptation is a human, environmental, and economic imperative:

THE HUMAN IMPERATIVE Climate change exacerbates existing inequities by widening the gap between people with wealth and people living in poverty. It has a disproportionate impact on women and girls, who, in most of the world, have little voice in decisions that affect their lives. It also puts an unfair burden on future generations.

Solutions to these climate-related inequities must address underlying power structures and dynamics. We will not accept a world where only some can adapt, and others cannot.

Yet, one in four species is facing extinction, about a quarter of all ice-free land is now subject to degradation, ocean temperatures and acidity are rising, and climate change is accelerating the loss of natural assets everywhere. There is still time to protect and work with nature to build resilience and reduce climate risks at all scales, but the window is closing.

THE ECONOMIC IMPERATIVE Adapting now is in our strong economic self-interest. The Commission found that the overall rate of return on investments in improved resilience is very high, with benefit-cost ratios ranging from 2:1 to 10:1, and in some cases even higher (see Figure ES.1). 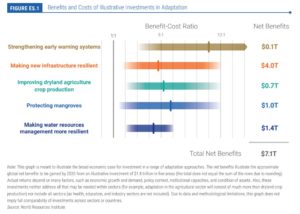 Specifically, our research finds that investing $1.8 trillion globally in five areas from 2020 to 2030 could generate $7.1 trillion in total net benefits. In other words, failing to seize the economic benefits of climate adaptation with high-return investments would undermine trillions of dollars in potential growth and prosperity.

The five areas we considered for this estimate are early warning systems, climate-resilient infrastructure, improved dryland agriculture crop production, global mangrove protection, and investments in making water resources more resilient. These areas are illustrative, based on available data on economic returns: the full report has broader recommendations across seven systems that go beyond these five areas.

We find that adaptation actions bring multiple benefits, which we call the triple dividend. The first dividend is avoided losses, that is, the ability of the investment to reduce future losses. The second is positive economic benefits through reducing risk, increasing productivity, and driving innovation through the need for adaptation; the third is social and environmental benefits.

In Figure ES.1, all five areas have avoided loss benefits, and the last three—improved dryland crop production, mangrove protection, and water resources management—have further economic, and social and environmental benefits. While avoiding losses is the most common motivation for investing in resilience, taken alone such losses underestimate the total benefits to society. Many adaptation actions generate significant additional economic, social, and environmental benefits, which accrue on an ongoing basis starting at the time of investment and are not dependent on the future state of the climate.

In other words, they are both more certain and more immediate. Better awareness of and evidence for all three dividends will make the economic imperative case for adaptation ever stronger.