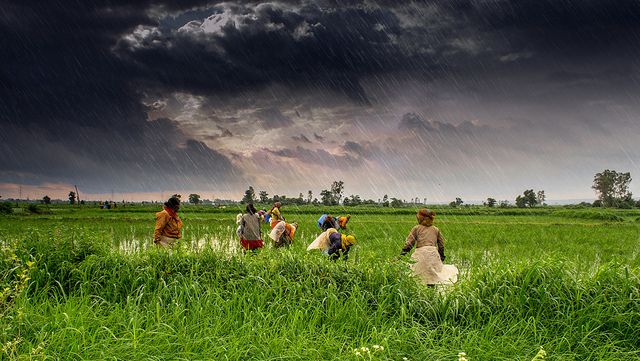 Rainfed agriculture sustains millions of farmers in India, meeting 40 percent of India’s food demand. But the impact of a changing climate, including increased droughts and rising temperatures, threatens food production and farming patterns. Although Indian farmers are adapting to climate change by improving water and soil management, and planting drought-resistant crops in various parts of India, these often small-scale efforts do not reach the millions of others who need to adapt.

Can adaptation activities spread across a large area to help millions of people adapt to climate change, especially in rainfed regions, where less than 40 percent of farmland is irrigated?

The project also built the Revitalizing Rainfed Agriculture (RRA) Network to promote and coordinate the sharing of knowledge on adaptation activities across organizations and geographies. In a phased manner, the network is focusing on working in following thematic areas related to broader canvas of rainfed agriculture issues. These include; macro economic analysis, soil health and conservation, land use and common lands, cropping patterns and food security issues, seed and other inputs, water resources and irrigation, agricultural research and extension, crop-livestock interactions, credit and financial services and markets etc.

At the ground level, the Network has made efforts to document lessons from field experiences related to soils, seeds, water, millets, fisheries, livestock and other themes. Write-shops for organized in this regard for experiences in Millets, Soil Fertility and Water related issues. Thematic analytical cases were developed based upon the proven field experiences. At the other end, large scale field experiences are being generated through fresh pilots. The upscaling and continuation of APDAI experiences belongs to such efforts. Comprehensive pilots are undertaken, in some selected locations across the country, with a focus to bring together the thematic areas embedded into the mainstream government programs. Such pilots are taken up in different locations, involving different functional nodes, established with RRA partners.

A comprehensive pilot program was grounded under the ambit of RRA Network, with six partner organizations undertaking various initiatives related to improvement in soil health, in 10 different locations across the country. These pilots aim to evolve specific measures and incentives for farmers to add atleast 2 tonnes of organic matter annually per acre of rainfed land. A package of 10 modules were developed, indicating various ways in which organic matter can be added to the soils. These are intended for training to the rainfed farmers in pilot locations. This functional node is being anchored by Chetana Organic and WASSAN, in partnership with WOTR, Pradhan, SPS and CHIRAG, with scientific advice from CRIDA.