In Germany, Berlin‘s Tempelhof Airport seems to be having trouble dying: it keeps getting reborn, often in unexpected ways. The site of the airport—in the south-central Berlin borough of Tempelhof-Schöneberg—was originally Knights Templar land in medieval Berlin, and from this beginning came the name Tempelhof.

Tempelhof was born in 1923, with the first terminal finished in 1927. In anticipation of increasing air traffic, the Nazi government began a massive reconstruction in the mid-1930s. Adolf Hitler held massive rallies on its grounds.

Tempelhof was one of Europe’s three iconic pre-World War II airports, the others being London’s now defunct Croydon Airport and the old Paris – Le Bourget Airport. It acquired a further iconic status as the centre of the Berlin Airlift of 1948-49.

One of the airport’s most distinctive features is its massive, canopy-style roof extending over the apron, able to accommodate most contemporary airliners in the 1950s, 1960s and early 1970s, protecting passengers from the elements. Tempelhof Airport’s main building was once among the top 20 largest buildings on earth.

Tempelhof Airport closed all operations on October 30, 2008, despite the efforts of some protesters to prevent the closure. That left Tegel and Schönefeld as the two main airports serving the city, along with the embarrassing new Berlin Brandenburg Airport, which continues to be one of the world’s preeminent planning and project management failures.

Today, it occupies almost a thousand acres of prime real estate in the German capital. Captivated by the scale and precision of the space, architect Norman Foster called it “the mother of all airports.” 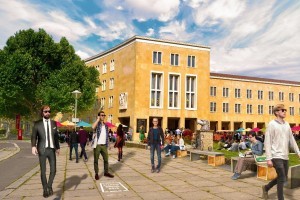 Today, the airfield functions primarily as a public park, as decided by citizens in a 2014 referendum. This was a remarkable accomplishment in an age when real estate development for the wealthy has consistently trumped the preservation of urban character.

The airport structures themselve have also, in their own way, been reclaimed. The Tempelhof Projekt is a 100% subsidiary of the state of Berlin, and works on behalf of the Senate Department for Urban Development and Housing.

Since January 1, 2011, the preservation, renovation, rental and administration of the former Tempelhof Airport building has been in their hands. A key focus of their work is the redevelopment of the property as a place of culture and creativity. They hope to transform it into Berlin’s new urban district for art, culture and culture and creative industries. 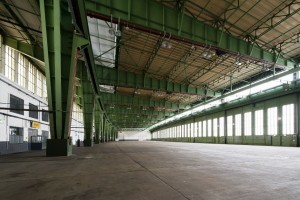 Within the iconic airport building, they operate an venue that’s in international demand. They manage events and projects at their roof gallery, the tower, the visitor center, the planned Allied Museum, and the conversion of Hangar 1 into a permanent, massive new event facility.

Local residents have been adamant about not letting the property fall into the hands of private developers: they want this public asset to serve the public in new and better ways for decades to come.

For instance, through the Tempelhof Projekt, some 1200 refugees—mostly from Syria, Iraq, and Afghanistan—were housed in two of the airport’s former hangars beginning in 2015.

Roughly 400 refugees remain in Tempelhof today, and public access to the park has continued.

In times of crisis—from the Berlin Airlift to the 2015 Refugee Crisis—this expansive space, built with fascist intent, has been reclaimed repeatedly for both social and humanitarian purposes.

As adaptive reuse has morphed into a trendy strain of architecture (think churches and schools converted into high-end apartments) buildings like Tempelhof airport remind us of a different kind of adaptive reuse; one that is organic, and at times, even redemptive.

All photos courtesy of the Tempelhof Projekt.