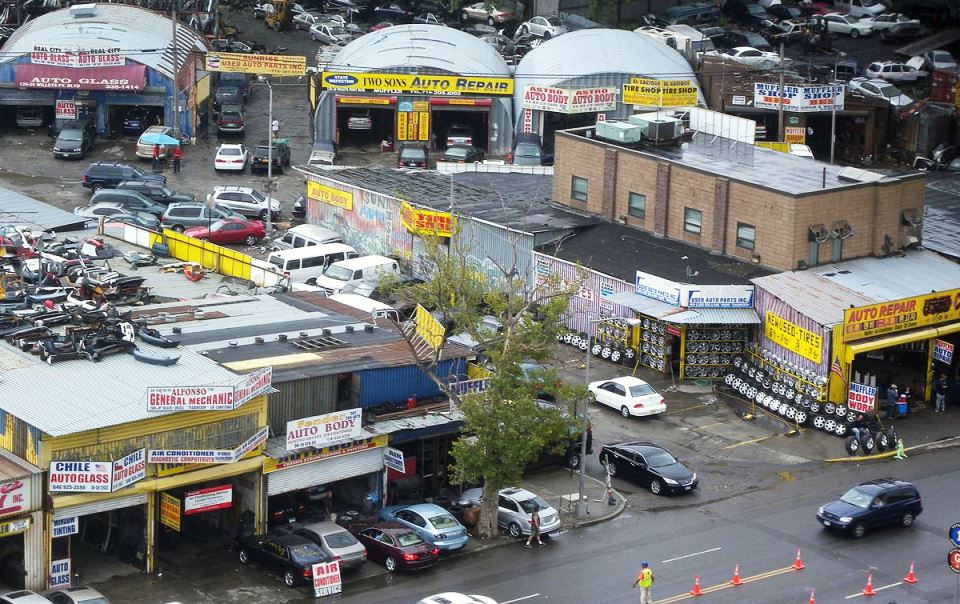 Willets Point—known locally as the “Iron Triangle”—is an industrial neighborhood in the New York City borough of Queens. Located east of Citi Field near the Flushing River, it’s known for its automobile shops and junkyards, and had a grand total residential population of 10 people in 2011.

On February 6, 2018, New York City Mayor Bill de Blasio, Borough President Melinda Katz and Council Member Francisco Moya announced an agreement to jump-start construction of 1100 affordable apartments on six acres of Willets Point – an increase of 225 affordable homes over the original development proposal. The new homes will be the first built on the wider Willets Point site which was approved for development by the City Council in 2008.

The new plan is for three, 100 percent affordable buildings including a standalone building with 220 homes for low-income seniors and also apartments for families at lower incomes than originally proposed. The plan also includes public open space and a new 450-seat public elementary school.

“This project delivers big on the number-one priority for people in Queens: finding an affordable place to live. It’s time to jumpstart Willets Point, and we are doing that by building more than a thousand homes for seniors and families struggling to make ends meet. I look forward to working with Borough President Katz and Council Member Moya to ensure these homes are delivered on time, and that we build even more affordable homes, schools and parks across Willets Point,” Mayor Bill de Blasio said.

“This agreement is about delivering affordable homes, and getting them built by date-certain. After years of false starts and controversies, this is a thoughtful way to get shovels in the ground, keep our promises to this community, and begin building an affordable neighborhood for seniors and working families. I look forward to our work over the coming year with Borough President Katz and Council Member Moya to shape a dynamic plan for the rest of this important site,” said Deputy Mayor for Housing and Economic Development Alicia Glen.

“The City has immediate, desperate needs for affordable housing units and school seats, especially here in Queens. This agreement to build 100 percent affordable housing at Willets Point is the right plan at the right time. As the sponsor of the 2008 Urban Renewal Plan, I am encouraged that we are moving forward in putting a shovel in the ground, and that housing and a school are the first priorities. I look forward to working closely with the community to help steer the future of this highly coveted area to meet the needs of Queens’ growing families,” Queens Borough President Melinda Katz said.

“I’m proud of the work done to make phase one of Willets Point one that will benefit the community. Willets Point has been 12 years of bad politics and broken promises. With this deal, we can look to providing some great housing relief for a lot of people who need it. By securing school seats, deep affordability, and senior housing we have accomplished something none of the previous iterations have been able to, and now with the taskforce I will co-chair, we can ensure this same community minded development continues in future phases,” Council Member Francisco Moya said.

To identify community priorities and produce recommendations for the remainder of the 17 acres of the Willets Point development site, the mayor also announced the formation of a task force, chaired by Borough President Melinda Katz and Council Member Francisco Moya. The task force, initially proposed by Council Member Moya, is modeled on the steering committee that developed the framework for the Greater East Midtown Rezoning.

“As we need to keep on building strong communities and ensuring families and individuals stay in their neighborhoods, I am glad to see part of the project to rebuild Willets Point includes more than one thousand affordable housing units, some slated for seniors, and a new elementary school. Sadly, more and more of our hard-working class families and individuals are being driven out of their homes and the neighborhoods they built. It is my hope this project contributes to making our communities affordable,” ​ said State Senator Jose Peralta.

“Willets Point is an important bridge between eastern and western Queens, and prioritizing affordable housing here will ensure a stronger, more inclusive community for those who live here. Years of deliberations about the fate of this centralized location have outlined the most pressing needs of the people and community boards in and surrounding Willets Point, and I’d like to thank the Mayor, Borough President, Council Member Moya, and all the partners for moving the ball forward on this long-stalled project,” said Council Member Peter Koo.

“Today marks a major milestone as the City moves forward on a plan for Willets Point that is anchored in greater and deeper affordability.  In an effort to meet the demand for more affordable housing at this site, we are working across agencies to ensure the pairing of quality affordable housing with the assets this neighborhood needs to thrive long into the future.  I want to thank the Mayor, the Deputy Mayor, and all my colleagues across government for their partnership to unlock the potential of this critical site,” said Housing Preservation and Development Commissioner Maria Torres-Springer.

“We are pleased to work with Mayor de Blasio and local elected officials to advance this initial phase of development, which will provide new affordable housing, a public school, neighborhood retail and public open space for the Queens community,” added Queens Development Group officials. “This is an important step forward in our longstanding mission to reverse 100 years of pollution at Willets Point, create good-paying jobs and turn vacant lots into a vibrant community. We look forward to working with the administration and local elected officials to advance additional phases of development at Willets Point.”

The development group has committed to a goal of 25% M/WBE participation, and will participate in HireNYC, a City program that connects local residents to potential jobs. They will seek to achieve the highest standards of environmental sustainability through either LEED Gold USGBC Certification or Enterprise Green Communities.

The agreement provides 100 percent affordable housing at the site for a variety of lower income levels.

Photo of Willets Point by Jim Henderson via Wikipedia.