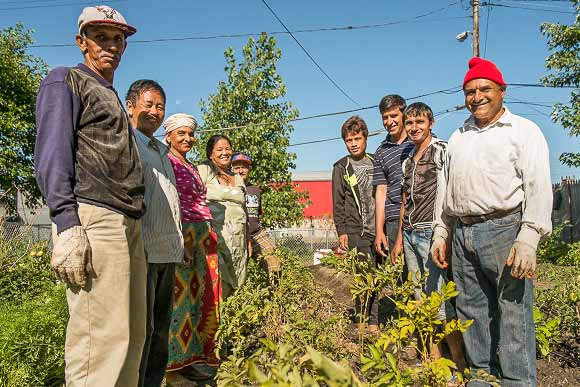 Mohammad Noormal came to Cleveland, Ohio as a refugee in October 2014, after working for five years as a translator for the U.S. army in his home country of Afghanistan.

Mohammad is now the manager of a game-changing initiative for education, urban farming and refugee integration, the Learning Garden and Production Farm.

Created as a collaboration between The Refugee Response and The Urban Community School (UCS), the Garden and Farm occupies six vacant parcels adjacent to the school. They act as a learning space, where children participate in hands-on lessons that complement and enhance the curriculum in a wide variety of subject areas, including math, art and science.

For Refugee Response, integrating its programming with K-12 institutions, such as UCS, allows it to grow its urban farm operations and access new land opportunities. The nonprofit is currently considering spaces ranging from one to three acres. The latter would allow the nonprofit to double the size of its farm operations.

Expanding in scale enables the nonprofit to provide a larger number of refugee trainees a formal farm experience under another recent initiative, the Small Farm Incubator Program, thus building their professional development and helping them become farmers. The incubator is a multi-year agricultural training, combining classroom lessons of English and food production skills with field experience.

It currently serves seven refugees. While they are not earning an hourly wage, they can sell the produce obtained from the Learning Garden, generating additional income for themselves and their families and contributing to the neighborhood’s development.