On June 1, 2018, Manchester Financial Group announced the groundbreaking of the $1.5 billion transformation of 12.07-acres of surplus U.S. Navy property into Manchester Pacific Gateway, a revitalization project that has been hoped-for, planned and talked about for at least a dozen years. 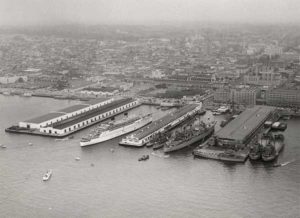 The Navy Broadway Complex, which is currently the home of the U.S. Navy’s regional headquarters, will make way for this redevelopment, which combines mixed use with new public green space. The much anticipated redevelopment will feature seven buildings totaling three million square feet within eight city blocks, including a new 17-story Class A office building for the U.S. Navy headquarters.

“The Navy is very excited to have reached this phase of the Manchester Pacific Gateway project. The transformation of this property is a big win for both the Navy and the City of San Diego. The Navy and San Diego have had a strong, mutually beneficial relationship for over 100 years. This project is another important chapter in that history,” stated Rear Admiral Yancy B. Lindsey, Commander, Navy Region Southwest. 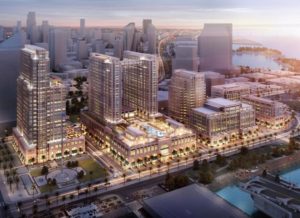 Manchester Pacific Gateway is consistent with the revitalization embodied in San Diego’s North Embarcadero Visionary Plan. Over four acres of the 12.07- acre project will be dedicated to public open space, including a 1.9 acre plaza on the waterfront at the foot of Broadway along Harbor Drive.

“This project is a beautiful extension of downtown San Diego, connecting the central business district to the waterfront, and encouraging pedestrian engagement,” said Perry Dealy, Development Manager for Manchester Pacific Gateway. “The pedestrian paseo, street setbacks, plaza, and restaurants will cater to locals, as well as regional, national and international tourists.” 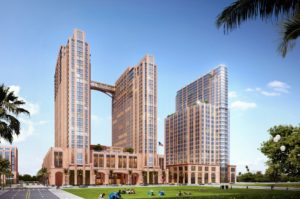 “I’m elated to accept this monumental responsibility for helping shape our waterfront district in the city that I love and call home,” said Papa Doug. “We have brought together the best architectural and development team in the world to ensure that every detail speaks to precision, elegance and style that will last for generations to come. We are ready now to recruit the best talent, businesses, retail, and hospitality to San Diego and to positively impact our economic growth and create new jobs. Manchester Pacific Gateway is a project for everyone, for our downtown, the region, and for people from around the world to see.” 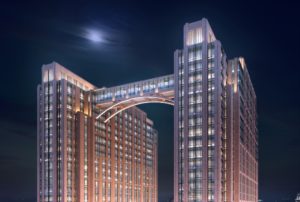 Dealy added that public parking will include 2,500 parking spaces for nights, weekends and holidays. “By opening up E, F and G streets for pedestrian access, walkability, and vehicles, Manchester Pacific Gateway will bring a vital and inspiring connection between downtown San Diego and the bay,” said Dealy.

Dick Gibbons, President & CEO for Manchester Financial Group, estimates that the project will bring in more than $12 million a year of Transient Occupancy Tax (TOT) revenue to San Diego for parks, roads, police, fire and other public benefits for the neighborhoods, and more than $10 million a year of property tax to the County of San Diego. In addition, Manchester Pacific Gateway is expected to generate $15 million a year in sales tax and more than $14 million in Development Impact Fees (DIF) to fund parks, fire stations and traffic circulation improvements.

“Manchester Pacific Gateway will have a significant positive financial impact for San Diegans,” said Gibbons. “We believe the project will generate about 2,443 construction jobs and nearly 3,000 permanent jobs. This is a visionary development, a true landmark that promises an extraordinary experience, and has local, regional, and world-wide appeal.” 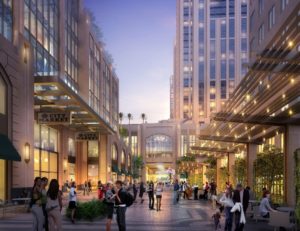 The Manchester Financial team secured sufficient equity to finance the project in a single phase. “In the 12 years that we have fought for this development, our enthusiasm and commitment has never wavered,” said Papa Doug Manchester.