For a couple of decades leading up to the mid-1990s, Edmonton, Alberta, Canada seemed to be a living laboratory for everything you could do to kill downtown.

Poor zoning decisions, protracted chaos during light-rail construction and the rise of the West Edmonton Mall sucked the life out of the area around the Jasper Avenue core. 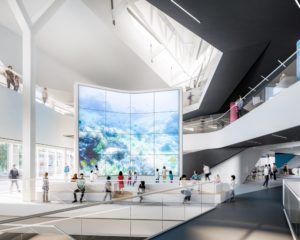 Signs of a new orientation were visible by 2008, when a city-commissioned cultural plan pushed a vision of social renewal through building for the arts.

That was knit two years later into a broader civic blueprint intended to repopulate the core and enforce design standards famously summarized by then-mayor Stephen Mandel: “Our tolerance for crap is now zero.”

A decade later, several new cultural facilities are under construction, in late planning stages or about to open. They include the Royal Alberta Museum, Stanley A. Milner Library, Allard Hall at Macewan Univerity, Arts Habitat Edmonton’s Artscommon & Artists’ Quarters, Edmonton Opera Centre, and a $53 million expansion of the Francis Winspear Centre for Music.

Some will add to the cultural district around Sir Winston Churchill Square (already home to the Citadel Theatre, Art Gallery of Alberta and Francis Winspear Centre for Music), while others promise to bring new life to formerly depressed neighborhoods.

Most were funded and approved before oil prices went soft, and before a previous provincial government’s long-established position on cultural building was upended by the NDP victory three years ago. 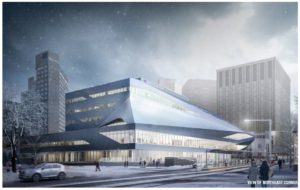 Opened in 1967 – and renamed in 1996 in honour of library champion Stanley A. Milner for his lifetime of commitment to EPL – this branch is the heart of EPL and downtown. The Milner Library receives over 1.2 million visits each year from Edmontonians of all backgrounds and with a variety of interests. The revitalized Stanley A. Milner Library will help build a thriving, vibrant downtown, and serve as a key component in Edmonton’s economic prosperity.”

The Globe and Mail recently took the measure of these six projects in the city’s cultural building boom, and the revitalizing effects they’re having on the town.

All renderings are of the Stanley A. Milner Library, courtesy of Edmonton Public Library.

Read full article by Robert Everett-Green in the Globe and Mail.