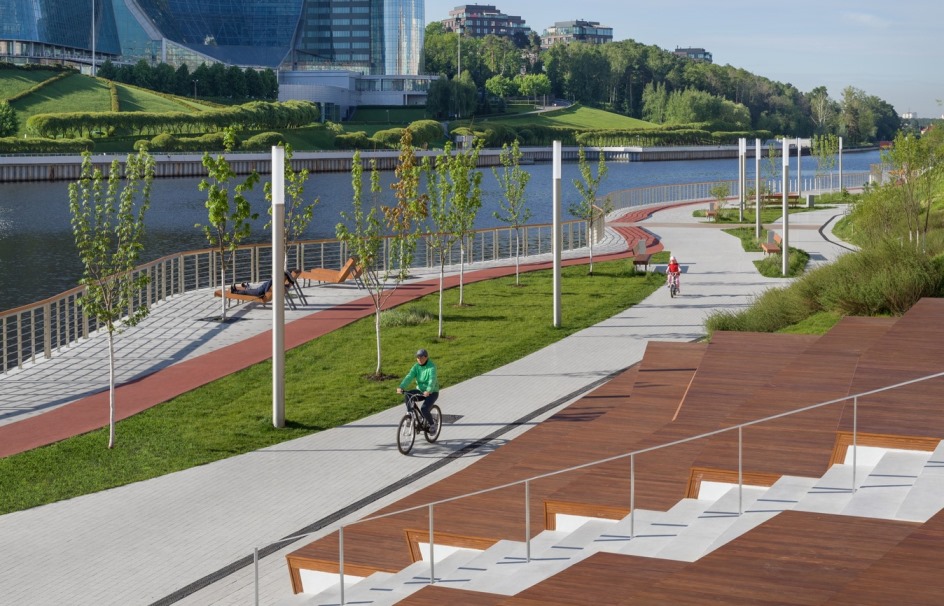 In Krasnogorsk, Russia (a suburb of Moscow), the architects at the Basis studio have been working on the Pavshhinskaya Poyma embankment rehabilitation and revitalization project for the past six years, and continue to work on it. 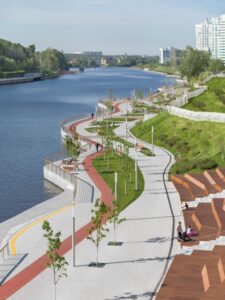 Ivan Ohapkin, the head of Basis studio says, “We created this feeling of entering a new room through a corridor. In addition to visual diversity, such transit areas make it possible to avoid oversaturating the place and to make the key attraction points less crowded. Without the different zones, the promenade between the two urbanized ‘clusters’ would become overcrowded with people and functions, making it an uncomfortable place to be in. We have separated the pedestrian flows by making an upper and lower promenade, which is easy to access with an extensive pathway system.”

In the initial stage of the project, the studio held public hearings and worked actively with the residents of the area. Basis studio received a lot of positive feedback from users of the public space, thanks to significant civic engagement and the high quality of the implemented project.

The architects managed to find common ground between residents and real estate developers, which channeled the situation in a positive, regenerative direction. 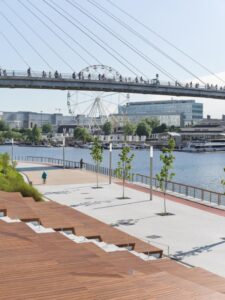 The design and functions of the embankment in Pavshinskaya Poyma are determined by the context. It is a buffer zone between two large clusters: the dense residential development without courtyards and the large shopping and exhibition complex located on the opposite side of the river.

The amphitheatre, for example, is designed with ergonomically shaped backrests with different inclinations making it comfortable to both sit on and lay back as on a lounge chair. Residents from nearby can work on their laptops, sunbathe or do yoga, while those who come for a walk can listen to an evening concert, meet friends or just relax by the water.

The promenade is designed with a variety of wide and narrow zones. The wider areas have different functions: a green space with benches and old willow trees, sun loungers with new trees, picnic areas by the water, an amphitheatre. The narrower areas are transit, with only a pedestrian zone, a running track and illumination. 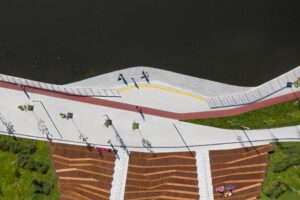 The design emphasizes the natural feel of the space: healthy trees have been preserved and new moisture-loving maples and willows have been planted, which will soon provide shade meanwhile creating a lively atmosphere. It’s easy to access the water, where you can have a picnic or just sit by the river.

The paving pattern is inspired by the natural gradient of the river, changing gently from darker tones by the water to lighter ones by the shore. The ripples in the pavement pattern echo the ripples in the water. The retaining walls use arch concrete with a geometric pattern, emphasizing the play of light and shadow.

The new lower embankment makes it easy to access any point of public space from the courtyards of the high-rise buildings (the ‘quiet zone’). The quiet zone was the first to be designed; this area has strong winds between buildings. With this in mind, the studio designed beehive-shaped pergolas with swings, whose main function is to diminish the winds and provide shelter from sun and rain.

It was important to accurately design the landscape: a large number of pyramidal poplar trees have been planted around the perimeter of the courtyard to protect it from wind and noise. The studio also designed bespoke complex parametric benches, low stage areas and paving to suit the design concept for this area.