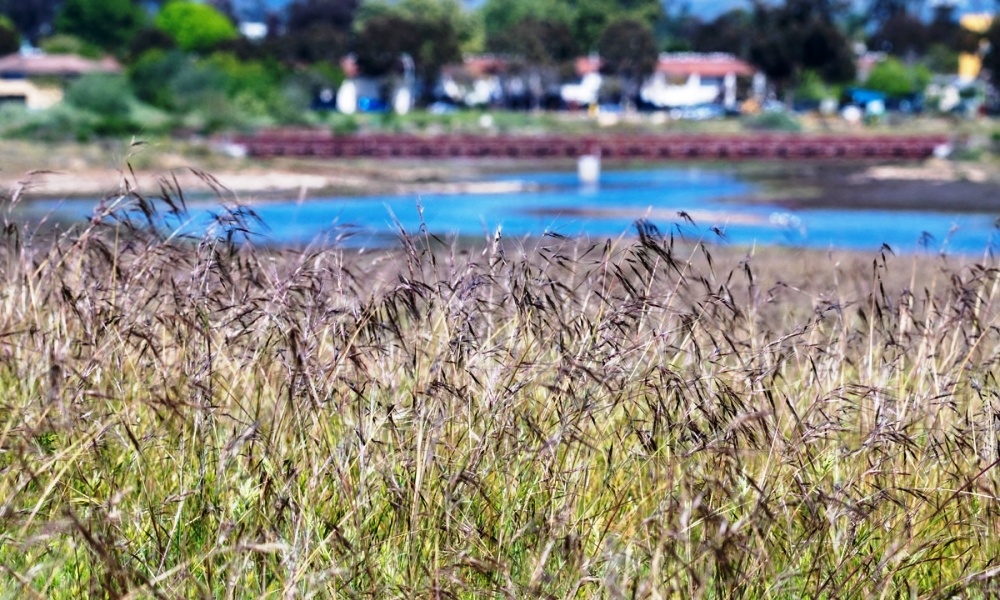 On May 14, 2022, after more than a decade of planning and ecological restoration, UC Santa Barbara will officially unveil the North Campus Open Space (NCOS) with a public grand opening. 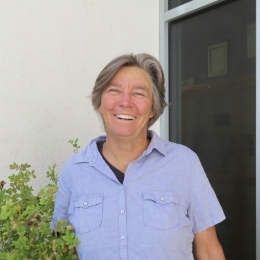 The project was led by the Cheadle Center for Biodiversity and Ecological Restoration.

The university first opened a few of the trails around the 136-acre project site in 2018, and now the last one is ready for footsteps.

“The Mesa Trail will provide community members with a rare opportunity to be immersed in a restored native grassland and coastal sage scrub,” said project lead Lisa Stratton, the Cheadle Center’s director of ecosystem management.

“They’ll be able to sit and enjoy the mountains and wetlands from two new overlooks and observe restored vernal pools,” she added.

The event was more than a decade in the making. 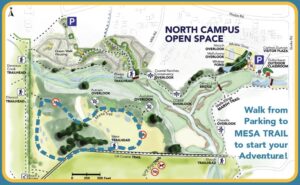 North Campus Open Space was first conceived in 2009, in partnership with the Trust for Public Land, to return the Ocean Meadows golf course to its natural state.

The team broke ground in 2017 after environmental studies determined the project’s feasibility. Over the next five months, contractors moved 350,000 cubic yards of dirt out of the wetland to restore its natural connection to the Devereux Slough. This provided a place for floodwater to go, reducing flood elevations by almost two feet in the surrounding neighborhoods, Stratton said.

Once the site’s topography was restored, Cheadle Center staff and volunteers reintroduced more than 1 million native plants. Gradually, public features like trails and bridges were installed, which highlighted the need for amenities like the parking lot, visitors plaza, outdoor classroom and support facilities. The whole system is designed to cope with 6-8 feet of sea level rise without impacting public access.

“Wetlands buffer climate change by creating tidal systems that adapt to sea level rise and reduce flooding by protecting communities from storm surge and retaining rainwater,” said Steve Henry, field supervisor for the U.S. Fish and Wildlife Service in Ventura. A grant from the agency supported acquisition, design and restoration of the site.

The North Campus Open Space is as much a project of education as it is of restoration. 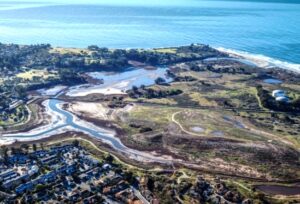 “Students have been vital to the project’s success,” Stratton said. Young Gauchos have stepped up, providing environmental assays and volunteering their time to the endeavor.

In turn, the project provided a fantastic training opportunity for budding biologists, zoologists and restoration ecologists who can take these skills with them in their future work.

“Coastal wetlands are a precious resource that benefit people and wildlife,” said Henry. “They support a myriad of rare and native species from California red-legged frogs and California least terns to tidewater gobies and western snowy plovers. Devereux Slough offers pristine habitat to help move these species closer to recovery while providing year-round educational and recreational opportunities for people from all walks of life.”

Indeed, several rare and endangered flora and fauna have moved into North Campus Open Space. The wetland provides habitat for snowy plovers — iconic residents of nearby Coal Oil Point — and burrowing owls have been regular winter residents in the grassland. Cheadle Center staff reintroduced western sea-purslane, a succulent that had disappeared from Santa Barbara County in the mid 1950s. It was last spotted at the La Cumbre Country Club golf course, Laguna Blanca. It’s fitting that restoring the Ocean Meadows golf course provided the opportunity to bring this plant back, Stratton reflected.

North Campus Open Space also provides a home to the endangered Crotch’s bumblebee, which is purportedly thriving amongst the Ventura marsh milkvetch, an endangered plant practically revived from extinction. The Cheadle Center is part of an effort to reestablish this plant, which had disappeared from 1967 to 1997, and NCOS now hosts over 2000 individuals.

The restoration project increased southern Santa Barbara County‘s coastal wetlands by 10%, restoring 45 acres of coastal wetlands and 90 acres of diverse upland plant communities. The site provides 2.5 miles of trails that connect to the larger Ellwood Devereux Open Space, all of which will be open during the May 14 festivities.

The event will include a scavenger hunt, where visitors can earn stickers by learning about the ecosystem and restoration effort. They can trade in a full set for a commemorative T-shirt. Refreshments are courtesy of The Coastal Fund.

A range of campus departments and community organizations will also participate. Cheadle Center Kids in Nature staff and interns will host an owl pellet dissection table; Bee Campus USA student leaders will share information about native bees and the plants they pollinate.

The Goleta Coast Student Audubon Group had scopes set up on site for bird watching, and volunteer bird handlers with Audubon Society’s Eyes in the Sky joined the festivities with their avian friends.

“The Mesa Trail opening is intended to be a fun, family-friendly day for people to learn more about restoration, local wildlife of all sizes, plants and ethnobotany,” Stratton said.