The Grand Hôtel-Dieu was the oldest hospital in Lyon, France until it was shut down in 2010. The downtown site on the river Rhône has been repurposed and renewed repeatedly since the 12th century.

Since the hospital’s closure, the building has undergone a four-year restoration, and has once again been repurposed, this time as a hotel (although it’s still owned by the Hospices Civils de Lyon (HCL), the publicly-owned agency that owns many local health-care facilities. 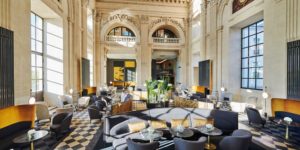 Nuel focused on maintaining the original beauty and architecture of the building whilst offering a contemporary, understated luxury design which is rooted in the history of Lyon and the building itself.

Lyon was once the capital of the European silk industry, playing a central role in the Silk Road trade between east and west. This led to a booming local silk industry which is still an important part of the city’s culture today. The city is also famed for its floral art which was an early source of inspiration for the local silk industry – a key design theme of the hotel. Prestigious Lyonnais silk creator Verel de Belval, a subsidiary of the Hermès group, has designed custom silk prints which can be seen throughout the rooms and public areas in silk screen panels, cushions and soft furnishings.

These rich fabrics perfectly contrast with the original architectural features of the building, such as stone floors, plastered walls and timber ceilings. This ‘monastic yet sophisticated’ design was inspired by the historical use of the building – as the city’s hospital for more than 800 years – combined with the desire to create a destination for global travellers.

Tom Rowntree, Vice President, Global Luxury Brands at IHG, commented at the opening, “InterContinental is known for transforming heritage buildings into stunning properties whilst maintaining their historic spirit, and InterContinental Lyon – Hotel Dieu is a perfect example of that. This new opening marks the sixth in the remarkable InterContinental portfolio in France which includes the likes of Carlton Cannes, Marseille – Hotel Dieu and Paris – Le Grand. Lyon is full of sophistication, culture and a rich history, making it a perfect fit for InterContinental as we pioneer in new luxury destinations worldwide.”

Le Dôme Bar is nestled in the heart of the hotel within the grand dome, one of the most breathtaking features of InterContinental Lyon – Hotel Dieu. Originally housing a chapel, today the dome is a space where hotel guests and locals can come together under its 32m high ceiling. Originally de-signed by Jacques-Germain Soufflot, architect of the Pantheon in Paris, Soufflot was called away during the project and he never saw the dome finished. The dome has since been named in his hon-our as the “Soufflot Dome”.

Le Dôme bar is open for all-day drinks and light bites. Traditional, local products are a key focus for the signature cocktails and Le Dôme offers a fresh twist on the famous pink praline, a traditional Lyon confectionery, combining it with vodka, pink champagne and lemon for a unique cocktail. Club InterContinental guests will be able to enjoy views of the grand dome from the first-floor balcony of the private Club InterContinental Lounge above.

The hotel’s restaurant, Epona, extends along the hotel’s front façade and opens on to an interior courtyard and garden. Head Chef Mathieu Charrois will offer world-class Lyonnaise dishes with a modern twist. Open for breakfast, lunch and dinner, the hotel’s main restaurant will be a destination in itself. 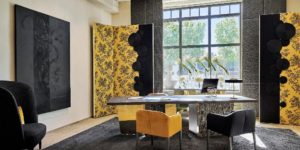 Of the 34 suites at the hotel, the 150 sqm Presidential suite is the largest suite in Lyon. It follows a similar modern luxury design, decorated in powder pink tones and elegant floral motifs.

From the living room of the Presidential suite, guests can enjoy a unique view in to the grand dome, overlooking the stunning space from the suite’s own private balconies.

The most emblematic of the 144 rooms at InterContinental Lyon – Hôtel-Dieu are the 28 Duplex suites, which feature huge vertical windows with views on to the Rhône river, maintaining the gran-deur and façade of the original building. What makes the Duplex suites unique is that guests enter from the mezzanine floor to take in the river view at first glance before heading down the stairs to the bathroom and bedroom.

The hotel also boasts 1,500 m2 of flexible convention and reception halls; L’Académie. This is one of the largest conference centers in the Presqu’île (Peninsula) quarter and in Lyon city center, offering 12 meeting rooms on four different levels, all with natural daylight.

For guests looking for relaxation, the Grand Hôtel Dieu complex is home to Le Tigre Spa, which includes a Hammam, 24-hour gym, sauna and steam room, as well as Pilates and Yoga classes. This haven of peace is situated just 1-minute walk from the hotel. Standard rooms start from £250.

All images courtesy of the InterContinental Hotels Group.