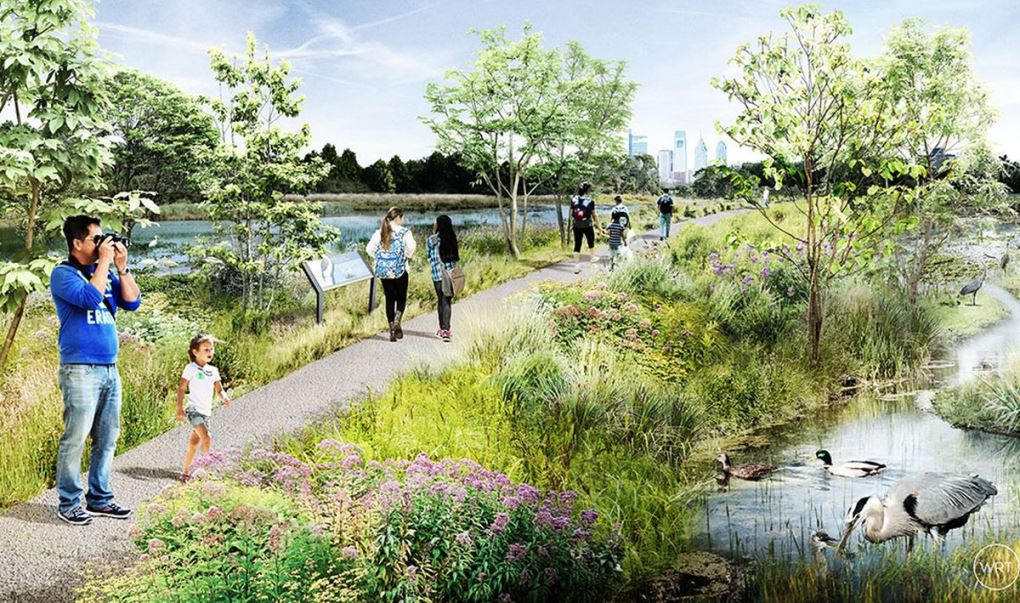 A little over a year ago, in Issue #72, REVITALIZATION reported on the upcoming renovation and ecological / historic restoration of Philadelphia‘s only estuary park, FDR Park.

Now, on May 22, 2019, the Master Plan for that regeneration has been updated with a new vision.

Back in 1914, Philadelphia’s city planners had a vision to carve out a park from the lowlying tidal marshes in South Philadelphia. This site, now known as FDR Park, is the result of a design by the Olmsted Brothers to create a new recreational landscape using earth excavated from the Broad Street Subway construction.

That work transformed Hollander Creek into a network of picturesque lakes with adjacent lawns connected by a network of carriage and foot paths. In 1926, the park hosted the national Sesquicentennial Exhibition and several grand civic buildings, including the iconic Boathouse, opened for the first time.

The 348-acre FDR Park has not seen transformative investment since a golf course was added in the 1930s. Today, as South Philadelphia’s population grows and recreation trends change, this historic park needs to be reimagined in order to fulfill its promise as a critical piece of civic, public health, and ecological infrastructure.

With financial support from the Friends of FDR Park, Councilman Kenyatta Johnson’s office and the William Penn Foundation, Fairmount Park Conservancy and Philadelphia Parks & Recreation engaged the Philadelphia-based planning and design firm WRT to develop a master plan that would return South Philadelphia’s only large park to its original intent as an urban oasis.

WRT’s charge was to create a sustainable vision for FDR Park that inspires investment, meets the needs of Philadelphians today and tomorrow, and focuses on resiliency in the face of a changing climate.

During the year-long planning process, the project team spoke to nearly 3,000 community members and stakeholders. These conversations took place in seven languages and in settings that ranged from online surveys, canvassing in the park, two public open houses, several small design workshops, and more than 30 stakeholder meetings. The project team learned that FDR Park is a critical green oasis in one of South Philadelphia’s most densely populated neighborhoods.

Philadelphians look to the park when they want to celebrate life through picnics and special events. They value opportunities to connect with nature and to enjoy safe walking and biking trails.

The public engagement process was accompanied by an equally robust study of the site’s hydrology. This study involved carefully developing an understanding of how stormwater moves onto the site and which portions of the park may experience flooding caused by high groundwater. By aligning community priorities with the realities of a changing climate and a low-lying park, the planning process was oriented toward finding the balance of activity, nature and water.

On May 22, the WRT team unveiled the Master Plan for FDR Park at a community event held on the Boathouse Lawn. This document summarizes the planning process and highlights the proposed elements of a redesigned space. The full text of the report will be available this summer.