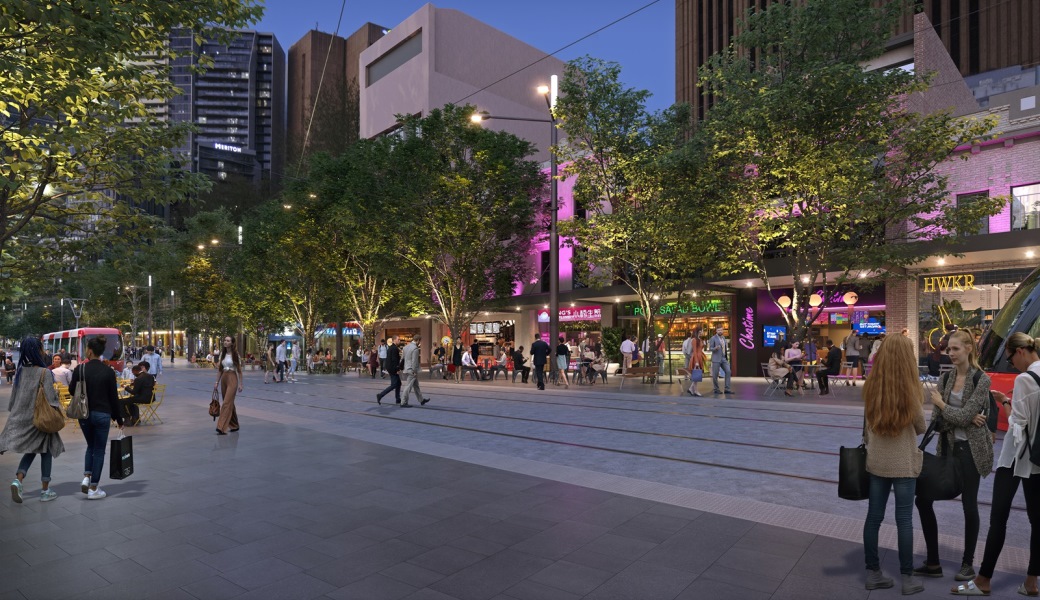 On October 26, 2020 in Sydney, New South Wales (NSW), Australia, the Sydney Council approved the permanent pedestrianization of George Street, a major corridor in the downtown area.  The NSW Government will contribute $1 million to help the City of Sydney create an additional 9000 square meters of public space for pedestrians in the heart of the city. 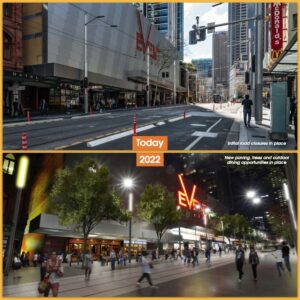 “The CBD and South East light rail has changed not just how we get around the city, but how we experience the city. It has created more space for pedestrians and provided a calmer, more appealing environment for workers, visitors and residents,” the Mayor Moore said.

“By creating people-friendly spaces along and around the light rail corridor, we’re delivering our long-held vision of a world-class civic spine in the city centre, while also assisting with Covid-19 recovery. As people cautiously return to the city while seeking to maintain physical distancing, wider footpaths and more space will be critical. These new spaces will help businesses operate, attract visitors back into the city centre and ensure everyone can move around the city safely. The southern end of the city and Chinatown have always been lively areas, and an expanded and engaging public realm will help to stimulate the local economy. Extending public space will also encourage walking through the city, which contributes to a healthy community and neighbourhood,” she explained.

The project is funded by the NSW Government’s Places To Love program, which partners the Department of Planning, Industry and Environment with councils across NSW to explore ways to unlock or activate public space. 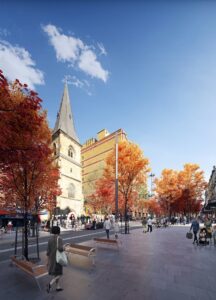 Planning and Public Spaces Minister Rob Stokes said the City of Sydney project will energize the Sydney CBD (Central Business District) in the crucial pre-Christmas period while also showing other councils how they can activate their town centers.

“George Street will be a landmark project to show what can be done to improve our streets and public spaces with imagination and collaboration. I commend City of Sydney and Transport for NSW for accepting our challenge,” Stokes said.

NSW Minister for Transport and Roads, Andrew Constance, said the Government was supportive of the plans that will work towards the permanent pedestrianization of south George Street.

“We’re excited to be working with council to make this part of the city even more attractive to pedestrians. The result will mean more open space that is not only safer, but more aesthetically pleasing,” Constance said. 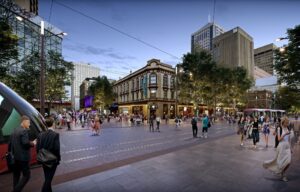 The pedestrian-friendly streetscape upgrades are expected to attract more footfall for businesses over time and provide more space for people to congregate responsibly while maintaining physical distancing. It will support local businesses such as cafés and store owners, potentially allowing them to trade out onto the public domain in the short term, while attracting investment in the long term.

The works will help generate a 24-hour city economy, making it available for cultural offerings such as busking or creative pop-ups from adjacent venues, boosting the city’s identity and encouraging people to come to the city for leisure beyond work and business activities.

Under the proposal, the current pedestrianization of George Street, between Hunter and Bathurst Streets, will be extended to the southern end of the city between Bathurst Street and Rawson Place. Further pedestrian improvements will also be made along George Street from Rawson Place to Pitt Street, Hay Street, Thomas Street and Ultimo Road in the City Centre and Devonshire Street in Surry Hills.

In July the City announced the first round of temporary road closures. The closures were supported by Planning and Public Spaces Minister Rob Stokes and helped build the case for permanent change.

The temporary closures were implemented and the installation of temporary street furniture and road surface treatments to help activate the space are expected to be completed later this month.

The process for permanent closure of the street to most vehicles is underway and expected to be completed by the end of the year. This will allow permanent works to commence in February 2021, including widening footpaths, installing new street furniture and planting trees to extend the urban canopy in the city.

The permanent road changes include:

The City will seek community feedback on the proposed plans and will work with the community to build a future vision for the area.