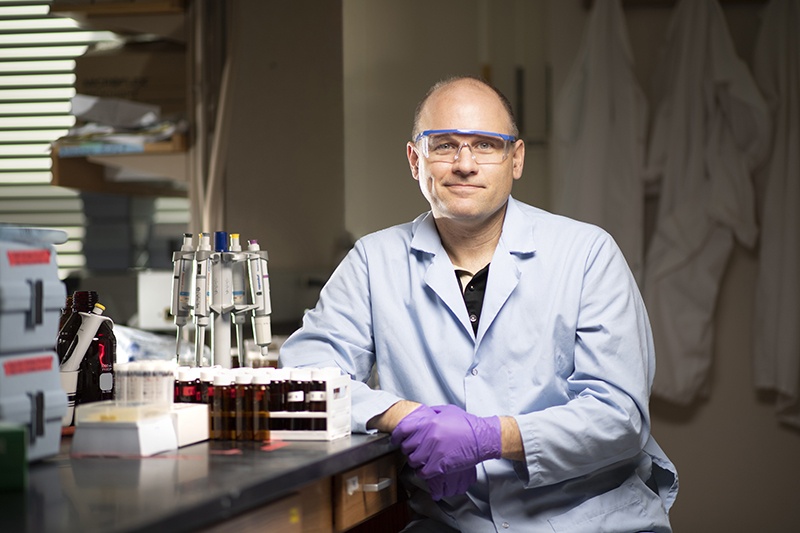 The more frequent wildfire disasters become, the less time communities will have to recover from each catastrophe. But it can take months for a town’s water to be safe to drink again after a wildfire.

That’s why Andrew Whelton, a Purdue University professor of civil engineering and environmental and ecological engineering, has been regularly showing up to wildfires with his students and dozens of coolers for the past four years.

The scene of people and coolers gathered outside of a post office probably looks like a misplaced tailgate party, but instead of hauling around cold drinks, Whelton’s team is setting out to fill up each cooler with water samples.

Using these samples, Whelton guides a community on the best way to restore its water systems.

“The faster we can decontaminate water systems, the faster communities can recover economically,” Whelton said.

He and his students ship their coolers full of several-hundred water samples back to their lab at Purdue, where they continue researching ways to prevent widespread water contamination for communities in the future.

Whelton’s wildfire trips began in 2018, when he visited California three times in the aftermath of Camp Fire, the deadliest and most destructive wildfire in the state’s history. Just the year before, he had also provided guidance from afar to groups dealing with water contamination from California’s Tubbs Fire.

The studies Whelton has published since assisting with these two wildfires have attracted the attention of other disaster response groups, which now routinely call on him for input on the best way to decontaminate a water system. When he gets these calls, Whelton rounds up some students and hops on a plane.

These trips with coolers could get more frequent in the years to come. Fire seasons have been getting longer, and the Western U.S. has experienced an increasing number of wildfire disasters over the past few years.

“Generally, when we get to a town that has been impacted by a wildfire, there are a bunch of people who can help, but they may not have the expertise or firsthand understanding of what questions they need to ask or how to answer those questions,” Whelton said. “We square them up and point them in a direction where they can find their way.”

Whelton flew to the site of Colorado’s Marshall Fire twice in January. The fire had burned over 6,000 acres, destroying almost 1000 homes. Amid a whirlwind of meetings, damage reconnaissance and water testing in the area, Whelton had a comforting realization: Various groups assisting the area’s recovery effort were already using findings from his studies published just within the last two years.

These findings, based on data Whelton’s team had analyzed from California’s Tubbs Fire and Camp Fire, were milestone discoveries for understanding the impact of wildfires on plastic pipes, which run through every modern home and building.

Prior to these discoveries, studies had primarily focused on how the high temperatures of wildfires degrade plastic, causing it to release chemicals into the air.

But Whelton and his students found evidence suggesting that heat-degraded plastic pipes also can leach chemicals into drinking water. These chemicals, called volatile organic compounds (VOCs), are often toxic but not easily detected by color or odor.

Together with his students and collaborators, Whelton compiles and cross-checks information on drinking water contamination from utilities in California, Oregon and Colorado. Since the Tubbs Fire, labs from these states have identified more than 60 VOCs that can be found in drinking water after a wildfire. Whelton and other Purdue faculty are continuing to investigate the relationship between VOC water contamination and fire-damaged plastics using water samples from the Marshall Fire.

Even though these studies are ongoing, the findings have already made it clear that disaster response groups need to test water systems for these VOCs before deeming drinking water safe to use. A study conducted by the California Department of Public Health, published in February, also found evidence in support of these findings.

“I was at a meeting in Colorado, and I could not believe that five years after the Tubbs Fire, we were talking about VOC water contamination like it was common,” Whelton said. “Here we are, at the most destructive wildfire in Colorado’s history, and the state, the Environmental Protection Agency and others know to test for these VOCs. And then they found them.”

Looking for answers without a playbook – then creating the playbook

Whelton and other faculty affiliated with Purdue’s Center for the Environment, currently transitioning to be part of Purdue’s new institute for climate, environment, food and sustainability, are accustomed to applying their expertise to a range of circumstances around the country and across the world.

For Whelton, this means getting calls to help at the sites of other disasters in addition to wildfires. While assisting Colorado’s recovery effort in January, he simultaneously provided guidance to groups addressing lingering problems with cleaning up a fuel spill in November in Hawaii.

Each of these visits results in a richer collection of questions that Whelton hopes to answer with his research. When a city runs out of treated water and needs to resort to using lake water, as was the case for the Marshall Fire, what are the additional health risks? What are all the chemicals to look for in water contaminated by fuel, such as in Hawaii, and how long do the chemicals remain in the water?

Whelton doesn’t stop at understanding the science of water contamination. Through his studies, he has also made infrastructure and public health recommendations, such as how to improve building codes to prevent wildfires from polluting drinking water and better inform households of water safety issues.

Even though no disaster has the same protocol, Whelton constantly updates the webpage of the Center for Plumbing Safety with “playbooks” that he and others have written for addressing water contamination.

The idea of the center, led by Purdue, is to work with other university and industry partners to give public health groups a better starting place on lessons learned from previous disasters.

Underlying problems for disasters to come

No matter the type of disaster, Whelton has noticed a common issue.

“Engineers and scientists are not receiving an education that prepares them to operate in the unknown, which is a disaster-type situation,” he said. “Disasters require you to look for things that are ill-defined and figure out what to do about them. This means you have to think in a way that is not prescribed.”

Last fall, Whelton began teaching a disasters and emergencies class at Purdue specifically for this purpose. Through this course, students learn critical thinking strategies and how to interact with various public health and environmental agencies.

Photo of Andrew Whelton is courtesy of Purdue University/John Underwood.