British company Aggregate Industries has won an award for restorattion of a sand and gravel quarry it operated near Exeter, England.

Work on their Blackhill Quarry earned “runner-up” and “highly commended” at the Mineral Product Association’s Biodiversity Awards 2017 in the Landscape Scale Category, which is sponsored by Natural England. These awards celebrate the best examples of quarry restoration and wildlife conservation in the UK.

Aggregate Industries has been supported by the Royal Society for the Protection of Birds (RSPB) in managing its restored land at Blackhill Quarry. The judges who visited the site commented: “The high quality of the restored habitat and evidence on-site of the return of key heathland plants and invertebrates was very impressive. The right decisions have been taken from the outset to develop habitat with a range of niches to host a rich species community. The project represents an important addition to the local habitat network and to the ecological resilience of the landscape as a whole.” 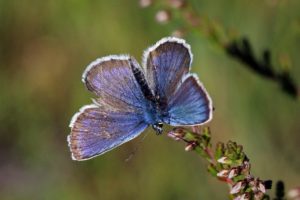 The result of the restoration has seen a dramatic transformation at the site and species recorded on site include nightjar, dartford warbler, small red damselfly and the silver studded blue butterfly. Also, the common lizard and adder are regularly recorded, and great crested newts were found for the first time, thanks to breeding ponds that were created by extracting minerals. And they were just a runner-up.

Mineral Products Association (MPA) members are planning to increase the area of priority habitats on restored sites from 6,000 hectares currently to around 9,000 hectares in coming years, and increase the length of hedgerows planted from 79 km to 237 km. The area of priority habitat would be equivalent to the size of Cardiff, and hedgerow would stretch from London to Cardiff.

This was the background to the MPA’s ‘Quarries & Nature 2017 – Appreciating Assets’ event, presented by BBC Radio 4‘s Farming Today presenter, Sybil Ruscoe, on October 19, 2017 at The Royal Society in London. The event attracted 45 environmental and conservation organisations as well as industry operators to celebrate the industry’s contribution to nature restoration and conservation.

Expert speakers included a number of current issues related to nature conservation. They were Stephanie Hilborne OBE, Chief Executive of the Wildlife Trusts, Professor Steve Ormerod, Cardiff Professor of Ecology and until recently Chairman of RSPB and Tom Butterworth Associate Director of WSP.

The event showcased some of the best examples of quarry restoration and wildlife conservation anywhere in Europe that were entered for the MPA Restoration Awards and the MPA Biodiversity Awards in association with Natural England. A series of outstanding images were also presented as part of the MPA’s Nature Photo competition.

Quarrywatch will link into the nationwide round of BioBlitz events being planned around the country during 2018. BioBlitz participants this year included Tice’s Meadow, a newly developed reserve at Farnham in Surrey created from a Hanson quarry which closed in 2010. Dozens of visitors took part in the wildlife survey there, with a total of 80 species identified.

The 10th Anniversary of the partnership programme, Nature After Minerals (NAM) was also celebrated. Nigel Jackson, Chief Executive of the MPA said: “Once again MPA members’ have demonstrated what an environmentally responsible industry can do to both protect existing and create new habitats. We could not be more proud to showcase what can be achieved by an industry that is uniquely placed to make a net gain to biodiversity.”

Stephanie Hilborne said “Working together, the minerals sector and nature conservation organisations can create habitats for wildlife on a landscape scale. In the next few years, it is vital that our partnerships stay strong in the face of political and economic uncertainty. In fact, as the UK sets a new course outside the EU it is all the more vital that forward-looking businesses demonstrate the leadership and ambition needed to secure nature’s recovery.”

Live presentations were complemented by film footage of the award winning sites. MPA’s 46th Restoration Awards recognise exceptional practice. This year the coveted Cooper-Heyman Cup for outstanding achievement in restoration was awarded to Tarmac with Hertford and Middlesex Wildlife Trust and Hertfordshire County Council for their work at Panshanger Park near Hertford.

The company extracted 5.5m tonnes of sand and gravel with progressive return to agriculture, woodland, grassland and wetland. The park is a grade II listed historic landscape. Its great beauty includes many veteran trees and the River Mimram, a chalk river and internationally important habitat. The land area that was the subject of extraction amounts to 20 to 25% of the whole site, with the work giving back 20ha of priority habitat including a new section of chalk river, fen and marshy grassland plus lakes with reed-fringed margins. As quarrying operations come to an end, a large part of the estate is being opened to the public as a country park and nature reserve.

The overall winner of the Natural England Award for Landscape-scale Biodiversity was Imerys Minerals Ltd with a project that has involved recreation of 785ha of lowland heathland on sites extending over 26 square miles of Cornwall. It began with the landscaping and reprofiling of existing china clay tips, pits and mica dams in order to re-create lowland heathland habitat. Heathland plant species were seeded onto sites, complemented by the planting of native trees. The scheme also included the creation of public access and installation of stock management facilities to enable grazing management.

Melanie Hughes, Director, Change and Reform, Natural England said “I’ve been really impressed by the extremely high-quality entries for this year’s competition. They showcase the tremendous effort and expertise dedicated by the industry to the cause of nature conservation. The future of our wildlife will depend upon us increasingly planning and delivering at landscape-scales to extend and connect habitats, making space for nature to ensure it is thriving and resilient to climate change and other pressures.The projects in the Landscape-scale category this year really demonstrate that ambition, and must have made the judging very difficult. The sensitive restoration of complex habitats, with heathland featuring particularly strongly, has been striking, and is reflected in the rich communities of plants and animals that have already begun to colonise these new parts of ecological networks.”

The winner of the Biodiversity Innovation category was Hanson UK New Scroggs SSSI at Keepershield Quarry. Among other important habitats, the Scroggs SSSI contained one of only three known UK populations of Alchemilla micans (shining lady’s mantle). To enable mineral extraction the SSSI vegetation was translocated to a receptor site through careful handling of turfs and through ensuring suitable ground conditions were created at the receptor site, including exposed areas of limestone and whinstone suitable to receive translocated turf. So successful was this that the new site is now designated as SSSI in its own right.

Steve Ormerod said “I am delighted to present this year’s Innovation category of the Biodiversity Awards – which showcase the excellent work the industry is pioneering to support, conserve and help restore our increasingly threatened biodiversity. It is also a great opportunity to celebrate ten years of partnership working between the industry, NGOs and statutory agencies through the Nature After Minerals Programme.”

The winner of the Planned Biodiversity category is Raymond Brown Aggregates’ Brickworth Quarry. The company recently gained permission for an extension to an existing operation. The area to be quarried is currently commercial coniferous woodland, but it was originally ancient woodland and the soil carries a rich seed bank. A robust handling strategy has been designed which relies on moving soils only once, using direct placement to the area of restoration.

The Butterfield Trophy for Individual Contribution was awarded to Michael (Mik) Cardus and Tarmac Dry Rigg Quarry, North Yorkshire. Mik was instrumental in converting a redundant office into an educational facility and has greatly grown the number of school and university visits from a wide area. He gives up much of his own time to those visits. Mik has poured his enthusiasm into restoration work at Dry Rigg that has targeted the rare alkaline fen plant community. He was also involved in the recording, trapping and relocation (under licence and supervision) of great crested newts that were recorded for the first time in the national park in the first phase restoration. He also records wildlife and helps with management at the neighbouring Swarth Moor SSSI.

An MPA Special Award was given to Marshalls plc for “Peregrine Watch”, an initiative to deter wildlife crime. This year’s MPA Nature Photo Competition attracted over a 100 entries. These photos, which fell into two categories, were displayed during the event and received high praise from delegates. Winners in the Employees’ category were:

Winners in the Volunteers’ category were: