Residential “agri-tecture” is taking root in the rapidly-revitalizing Queen West neighborhood of downtown Toronto, Ontario, Canada with the introduction of The Plant. As discussion around urban agriculture and need for a more edible landscape builds, two residential condo developers have partnered to fill the void.

With half the world’s population currently living in cities, pressure is mounting to maintain residential housing supply, while also reconnecting urban centers with nature. In Toronto this pressure has manifested itself in a call to create more downtown greenspace and uncover important opportunities for urban food production. The city of Toronto has long identified residential condo development as a key opportunity for its urban agriculture initiatives.

Curated Properties‘s established history of development in the Queen West neighborhood and Windmill Developments‘ track record on sustainability have come together to ensure societal and city development interests align.

While community gardens and rooftop gardens are not new to Toronto’s multi-residential communities, Jonathan Westeinde, CEO of Windmill, says there’s another layer of integration that can ensure the city’s ongoing condo boom ends up more green than grey. “Being able to grow your own food where you live has always been how humans lived. It’s a recent North American phenomenon to identify food growth as something that takes place outside of the city center,” says Westeinde. “As developers, our opportunity to address this misconception ultimately rests with the land we own and the projects we introduce.”

Windmill has teamed with Curated Properties on The Plant, a mixed-used community that’s rooted in sustainability and residential agriculture, the project will be developed on the original site of the Dufflet Bakery, one of Toronto’s pioneering food production brands. The new building is designed according to the same One Planet Living principles guiding Windmill’s Zibi green redevelopment project in Ottawa (see related article in this issue of REVITALIZATION), with an extra emphasis on residential, urban agriculture.

The site currently is a parking lot, plus one building. The building used to be the Dufflet Pastries factory. The factory has been converted into a temporary sales centre for the project, but will eventually be demolished.

Unfortunately, reuse of that building was not possible with The Plant. In an emailed response to an inquiry by REVITALIZATION, Alex Spiegel of Windmill Developments explained: “I’m a big fan of adaptive re-use developments and that’s my first consideration on any project. Kensington Lofts, Tip Top Lofts, the Loretto and Arch Lofts are all conversions.”

“In this case, it wasn’t viable,” he continued, “because the existing site comprised mainly parking lot and a single storey metal-frame building that had minimal value / interest, and could not support an addition above. One small part off the site also included an old 2-storey brick building but it was in very poor shape, had no heritage value, and also could not support any additional density. The site was more appropriate for a more dense development (10 stories) so replacement of the old with a new energy-efficient structure was a more optimal way of providing intensification. When the original building is demolished its constituent parts will be recycled.”

As an example of their dedication to reusing structures whenever possible, Windmill is also developing an old church in Toronto’s Junction neighborhood. They are preserving the old structure, recognizing that the most sustainable way to build is to repurpose old building. 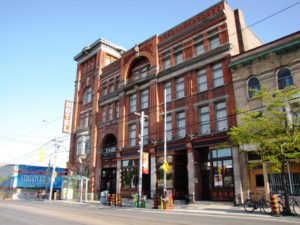 The Gladstone Hotel is one of a few pre-existing businesses in the transformed Queen West neighborhood that has been able to capitalize on the recent boom.

This grand old railroad-era hotel had over the years fallen into disrepair and maintained itself by renting boarding-house style accommodation.

The tavern on the first floor is now home to a weekly “Art Bar”, where locals from the arts community converge to socialize. 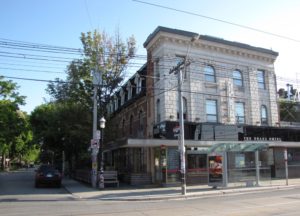 In 2005, it underwent a major renovation spearheaded by the Zeidler family. [Note from Storm: While doing some work in Toronto, I stayed at the Gladstone shortly after its restoration. I highly recommend it to those who desire a richer, more intimate hotel experience than is offered by the chains.

Queen West was in the early stages of revitalization at that time, so I’m glad to see that the momentum has accelerated since then.]

Known for an ethos of density without disruption, The Plant is Curated Properties third project on Dovercourt Road in Queen West. The firm specializes in sensitive, design-conscious development in some of Toronto’s most discerning neighborhoods. With The Plant, Curated extends their ethos to embrace Windmill’s sophisticated approach to sustainability and social responsibility.

“The choices we make as developers dictate the lifestyle available to the people that live in our buildings. Urban living used to mean choosing between being a cool neighbourhood full of amenities or having enough land to cultivate a robust garden,” says Adam Ochshorn, partner at Curated Properties. “When you consider two-thirds of all humans will soon be city-dwellers, having to choose between an urban residence or the ability to comfortably grow your herbs and vegetables no longer makes sense.”

“It might seem extreme, but we orientated this entire project around our connection to food. It’s our guiding principle and the result is a building that lives and breathes and offers a better quality of life to the people who will live and work here,” adds Curated Properties partner Gary Eisen. “The Plant is a community that fits with the foodie culture that has come to define Queen West.”

The Plant will be a true, mixed-used community with ground floor retail and office spaces on the second floor. The intention is to recruit like-minded businesses and office tenants that will amplify The Plant’s dedication to sustainability and reinforce a project-wide lifestyle. One and two-story residential homes are dispersed throughout the building, with three and even four bedroom suites available.

Food-focused amenities include an internal greenhouse to cultivate seeds and act as a nursery for starting up plants. An industrial style kitchen designed to accommodate seasonal preparations of food products can also host social events.

Inside each suite, custom micro-garden beds for fresh herbs will be built into sidecars in the kitchen. Suites themselves are wide and shallow as opposed to the typical shoe box, maximizing sun exposure. Each unit will come with a terrace or balcony with ample space for plants, furniture and a barbeque. Outdoor space is optimized through an angular construction enabling sunlight to flow unimpeded into the suites.

“The balconies and terraces at The Plant are really more like an 8-storey porch,” explains Westeinde. “They have their own structure, with railings and lattices, as well as a thermal break. So not only are they large and spacious, but they’re orientated to work with the sun and encourage plant life to take hold.”

In keeping with the project’s local inspirations, interiors will be handled by +tongtong, who has also collaborated with Queen West staple The Drake. “We wanted to design the suites and common areas to incubate a community around food, agriculture and local ingredients. With The Plant we have accomplished terrace-to-table food production, and that’s just the start of it,” says lead designer John Tong.

The Plant is a 10-storey, mixed use building. Suites range from one bedroom suites to four bedroom townhomes. Units start at $500,000.

About Curated Properties: (from their website) Curated Properties specializes in developing custom, midrise residential projects for the savvy urban purchaser. Principals Gary Eisen and Adam Ochshorn have been building infill homes in Toronto since the late 1980s, and continue to define the Toronto market with a keen eye for developing neighbourhoods in context. With a bold vision to push beyond design status quo, Curated has built its reputation on creating something extremely rare in Toronto: intimate condos and townhomes, in fantastic downtown pockets, with a hand-crafted quality tailored to the bespoke tastes of a discerning market.

About Windmill: (from their website) Windmill is a visionary company dedicated to transforming conventional development practices by ensuring that exemplary ecological, social and financial returns are achieved in all their projects. Every Windmill development is conceived, designed and constructed to protect and enhance the local community and our ecosystem. Windmill is the only developer in North America to have achieved LEED Platinum on all its mixed-use projects. Completed projects include The Currents, a performing arts centre and modern condominium tower in Ottawa’s Wellington West neighbourhood, and Dockside Green, a model sustainable community in Victoria that was named one of 16 Clinton Climate Initiative Climate Positive developments.