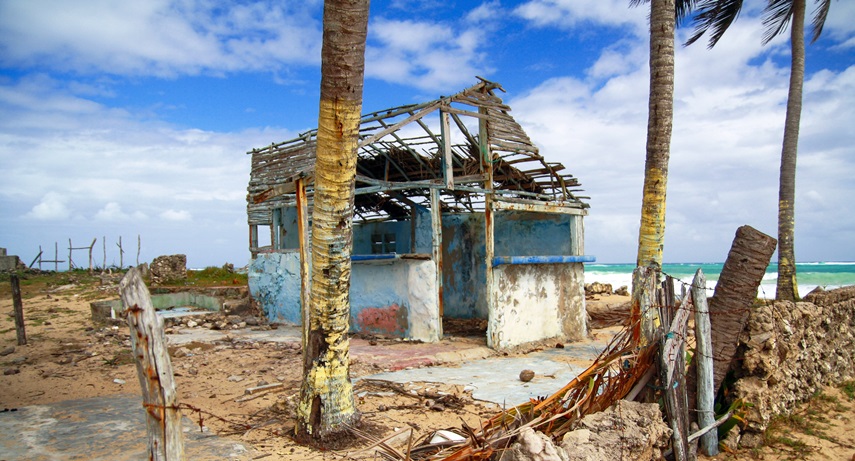 As Hurricane Matthew ground across Haiti, triggering mudslides, cutting through gullies, destroying anemic vegetation and possibly washing deadly strains of cholera and sewage into rivers where people wash and drink. This Caribbean island nation has been lost much of its forest, and many trees planted by an endless litany of well-intentioned charitable organizations are chopped for firewood.

It’s a universal problem, but one that reveals itself most tragically in island nations; but there are solutions. Clothing company Timberland, for example, is working with the Smallholder Farmers Alliance (SFA) to promote agroforestry, which essentially blends trees with cash crops to revive soils. The Alliance for Clean Cookstoves is beginning to explore options for using carbon finance to fund the distribution of clean-burning cookstoves, as is CQuestCapital.

Of these three efforts, SFA says its project has planted nearly six million trees since 2010, and in a way that embeds trees into the economy by strategically integrating them into land management. The project now involves 3,200 farmers, nearly half of whom are women, and yields are up nearly 40 percent.

But hurdles run high as corruption and poverty contribute to a spiral of despair. Haitians, hungry and cold, are direct in their assessment. Forget about trees’ long-term potential, they tell aid workers. To eat tonight we need to burn wood today.

Why Trees Matter Tree roots grip nutrient-rich topsoil, holding it in place during heavy rains and prevent mudslides and flooding, said Ethan Budiansky, who oversaw the nonprofit Trees for the Future’s tree planting endeavor in Haiti and now runs the Cocoa Livelihoods Program’s climate-smart cocoa program, in a 2010 interview with Ecosystem Marketplace.

“There is a global focus on planting trees to reduce carbon in the atmosphere, but there is so much more to trees that that,” he says. “They play a significant role in the health of the environment and, therefore, the health of the people.”

Tree roots trap pollutants before they flow into waterways. They recycle moisture back into the atmosphere. And they provide refuge for a host of life, from birds to honey bees.

In Haiti, subsistence farmers make up nearly 75 percent of the population, and they watch helplessly as terraced land they tilled on this mountainous terrain washes away. Nearly 15,000 acres of Haiti’s topsoil washes away each year, Budiansky said, five times the size of the principality of Monaco. Farmers whose earnings average less than two dollars a day are often left with little more than dust and rocks to till. Agroforestry, however, helps bolster those terraces because farmers plant trees on them.

“Desertification,” a word that basically means turning lush land into desert, has taken hold of much of Haiti’s interior, said Norman Christensen, the founding dean of the Nicholas School of the Environment and Earth Studies at Duke University and a frequent volunteer in Haiti, in a 2010 interview with Ecosystem Marketplace. Trees that used to recycle moisture and replenish the atmosphere are no longer there to promote gentle rains that nourish vegetation. This leaves dry, dusty land at the mercy of hurricanes whose intensity and frequency has increased, scientists say, due to climate change.

While the word, desertification, is relatively new, the phenomenon is not. It is basically what happened in the United States in the 1930s when over farming turned the Great Plains into the Dust Bowl.

In response, President Franklin Delano Roosevelt sparked the first large-scale environmental movement to save this land. “The nation that destroys its soil,” he said, “destroys itself.”

Changing the Odds Fighting hurricanes and storms without forest cover is like wearing boxer shorts while fighting an armor-clad knight. There is no contest.

To change these odds, nonprofit organizations such as Trees for the Future have teamed up with local groups to find solutions that serve Haitians immediate and long-term needs. Since 2012, they have planted more than a million trees such as the fast-growing leucaena that, similar to many shrubs, grow even bigger after getting pruned back for firewood and other uses. And they are nourishing what Budiansky dubs a “miracle tree,” the moringa, whose leaves hold massive amounts of Vitamin C, calcium and protein, can be cooked like spinach and can be harvested six months after the trees are planted.

But tree planting, good will and charitable intentions have not been enough to save Haiti. Somehow, economic incentives must be found.

Forest Cover and Business Survival Many businesses in Haiti already have clear incentives pushing them to find ways to promote forest cover. Digicel, for example, the leading mobile phone operator in Haiti, experiences firsthand how Haiti’s lack of forest cover hurts its bottom line. Roads to their cell towers wash away every year; they must be repaired for business to proceed. Digicel responded by sponsoring its own foundation that promotes tree cover and provides educational and social services to the Haitian people. Similarly, hydroelectric companies are investing in forest cover in the highlands to promote clean water in the lowlands.

Teaming up With Ecosystem Markets Funds from carbon market investors could be used to support the use by Haitians of kiln and cook stoves that emit less carbon into the air, suggested Jenkins. Businesses could invest in forests upstream to protect their downstream investments. Developers might be persuaded to protect endangered biodiversity. Nongovernmental organizations could provide oversight to avoid local corruption.

Ecosystem markets, however, would be limited by the absence of a functional economy in Haiti, says Christensen. Environmental, social and political risks pose additional challenges to environmental markets, adds Budiansky, pointing out that Trees for the Future supports carbon and other environmental markets elsewhere.

“When you’re planting trees in the carbon market, you’re guaranteeing to investors that those trees will remain in the ground for 10-to-20 years,” Budiansky said. “We cannot make that guarantee.”