Over the past two centuries, native oyster populations have experienced a dramatic decline as habitat loss, disease and historic over-harvesting have taken their toll. But by filtering water, forming aquatic reefs and feeding countless watershed residents, the bivalves are an absolutely essential part of their ecosystems, and of the economy of many coastal areas. 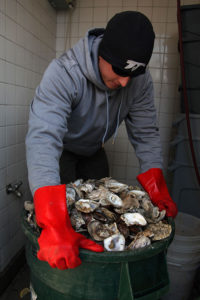 Producing up to 500 million pounds of oysters each year, the Gulf Coast region of the United States is a shellfish haven: The area accounts for 67% of the oysters consumed in the U.S. But each oyster slurped down leaves behind a shell, and recycling those shells—instead of sending them to landfill—could actually be the key to rebuilding a coastal region decimated by natural and manmade disasters.

In October of 2016, the non-profit Alabama Coastal Foundation (ACF) teamed up with the waste-management company Republic Services to launch an oyster-shell recycling program in the region.

It began with just a few restaurants: A designated representative from Republic Services would drive out at 3 a.m. on Mondays, Wednesdays, and Fridays to collect shells left over by diners, and bring them to a nature preserve where they can aerate and “cure” for several months before being returned to the ocean. The program has since scaled up to 29 restaurants, and Mark Berte, the executive director of the ACF, tells Fast Company that interest keeps growing.

While it’s common practice among seafood restaurants to send their empty shells to landfill with the rest of their waste, a handful of regions are beginning to put the shells to more productive use by returning them to the ocean, where they become the building blocks of restored oyster beds.

In August 2016, the Alabama Coastal Foundation received a grant from the National Fish and Wildlife Foundation (NFWF) to establish an oyster shell recycling program for local restaurants! NFWF is providing the funding for this project as a part of the Gulf Coast Conservation Grants Program.

Oyster shells that are collected through this program will go back into Alabama waters to help more oysters grow, provide habitat, limit erosion and improve water quality. This program is one of the activities that we have under our involvement with the Create a Clean Water Future Campaign.

The program was set up in phases starting with the Causeway Route (Fall 2016) and the Gulf Shores/Orange Beach Route (Spring 2017) for Phase 2. Now, the program is open to all restaurants in coastal Alabama.

The Alabama program is similar to one launched earlier to restore oyster reefs in the Chesapeake Bay. As of 2013, just a year or so after its creation, they already had over 130 members in the Shell Recycling Alliance. It’s a group of restaurants, caterers and seafood wholesalers that save their unneeded shells—some in five-gallon buckets, some in 14-gallon trash cans, some in 55-gallon wheeled bins—for pick up by Tommy Price.

The Alliance is a member of the Oyster Recovery Partnership, a conservation group that has for two decades worked to restore oysters in the Chesapeake Bay. As a driver in the partnership’s fleet of trucks—which are complete with shell recycling logos and oyster-themed license plates—Price has watched the Shell Recycling Alliance grow, generating more than 1,000 tons of shell that are an integral piece in the oyster restoration puzzle.

“Shell is a vital ingredient in oyster restoration,” said Stephan Abel, executive director of the Oyster Recovery Partnership. Indeed, it has become such a valuable resource that a bill was been proposed to give Chesapeake Bay individuals and businesses a $1 tax credit for each bushel of shell recycled.