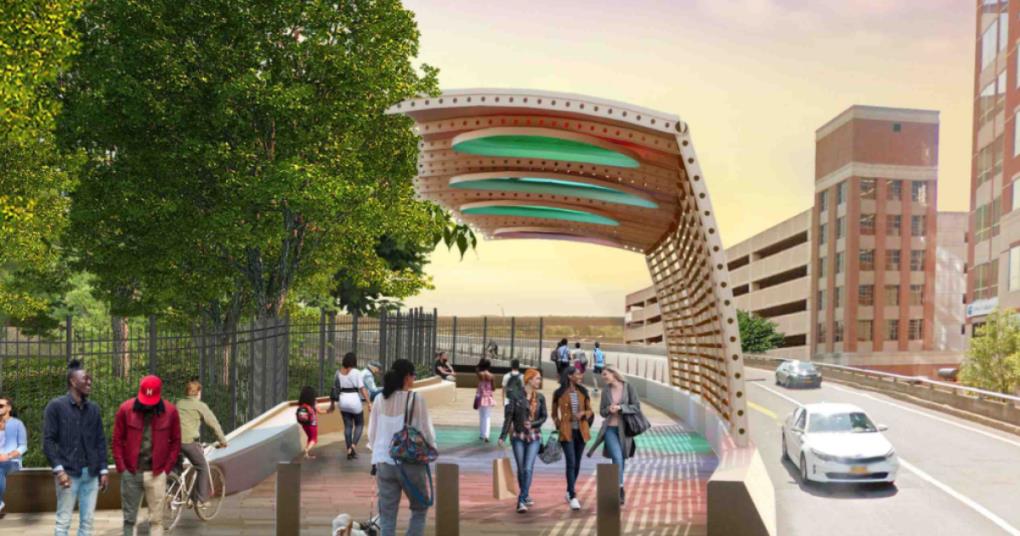 Anyone who has spent much time in downtown Albany, New York in recent decades know that this is a city with some significant revitalization challenges. Being the state capital, no small amount of funding has been allocated to that purpose over the years. While some redevelopment projects have been successful, none has changed the trajectory of the city, which could be described as stagnant, at best.

As with most major U.S. cities, Albany has to undo a century of bad urban planning that isolated the downtown from its riverfront. Reconnecting to the Hudson River is crucial to setting the stage for long-term revitalization, and now that has happened. 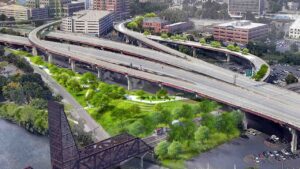 The Skyway converted what had been an underutilized exit ramp from northbound Interstate 787 into an urban oasis that provides easy access to the Corning Riverfront Park and the Mohawk Hudson Hike Bike Trail—which is part of the Empire State Trail—boosting recreational opportunities and furthering tourism and economic activity in the Capital Region.

“The completion of the Albany Skyway is a game-changer for the city and the perfect example of a transformative infrastructure project that promotes equity and connectivity,” Governor Hochul said. “Infrastructure can be more than just building roads and bridges – like the Skyway, it can be about improving quality of life and righting the wrongs of the past. With this ribbon-cutting we are reuniting divided communities, revitalizing Albany’s beautiful waterfront, and recommitting to a transformative vision that is a skyway for the future of infrastructure in New York.”

Governor Hochul also announced that the public process for the replacement of the Livingston Avenue Railroad Bridge, led by the State Department of Transportation, will continue in June with a formal public hearing taking place. A date and location in the City of Albany will be identified in the coming weeks.

Albany Mayor Kathy Sheehan said, “The Albany Skyway provides one of the most historically underserved census tracts in our region with a revitalized park, new economic opportunities, and a welcoming gateway between the Hudson River waterfront, Clinton Square, Arbor Hill, and Sheridan Hollow. Thank you to everyone who helped champion this project, including Governor Hochul, NYS Department of Transportation Commissioner Dominguez, NYS Senate Vice President Pro Tempore Breslin, Assemblymember Fahy, Assemblymember McDonald, and Councilmember Love, as well as the adjoining neighborhoods and business community – helping create one of the most transformational projects in our city in decades.” 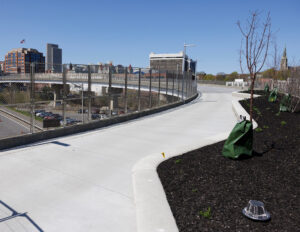 New York Secretary of State Robert J. Rodriguez said, “The Downtown Revitalization Initiative is re-connecting New York’s downtowns to their treasured waterfronts throughout the State, creating vast new opportunities for recreation, tourism and economic development in the process. The $1.9 million DRI investment in the Skyway project will pay dividends over and over again by enhancing waterfront access, creating essential public gathering spaces and leveraging many more public and private investments in Albany’s burgeoning downtown.”

Named a Downtown Revitalization Initiative (DRI) Round 3 winner in 2018, the City of Albany is focused on revitalizing Clinton Square to create a welcoming gateway into the capital city. This compact and walkable area, rich in history, arts and cultural assets, is where five city investment zones converge.

The City envisions revitalizing Clinton Square directly while providing infill investments, corridor enhancements, and targeted housing revitalization projects. With DRI investment, residents, visitors, and the workforce will enjoy new links to the Hudson River. Clinton Square is poised to be a thriving gateway district and a distinctive hub that connects and catalyzes activity in Downtown and the Warehouse District, and draws this momentum into the Arbor Hill and Sheridan Hollow neighborhoods through public infrastructure enhancements, private project development and vibrant arts and entertainment investments.

State Senator Neil Breslin said, “I am pleased to see that the Albany Skyway project has been completed. This new pedestrian pathway will help further downtown Albany’s economic revitalization, while strengthening people’s connection to the both the Hudson River and the Empire Trail System.”

The Skyway project permanently closed the underused Clinton Avenue ramp, which travels underneath Interstate 787 and links Quay Street near the Corning Preserve to Broadway and Clinton Avenue at Quackenbush Square. The ramp was repurposed as a landscaped, multi-use park for pedestrians and bicyclists that will provide safe, non-motorized access to the Hudson River and the Corning Riverfront Park from downtown Albany and such neighborhoods as Arbor Hill, Sheridan Hollow and the Warehouse District. The approximately half-mile-long Skyway is fully accessible and compliant with the Americans with Disabilities Act.

Assemblymember Patricia Fahy said, “The Albany Skyway is another exciting development in helping to revitalize downtown Albany while reconnecting it with our greatest natural asset, the Hudson River waterfront. The Skyway will become the Capital Region’s first-of-its-kind elevated, linear park and will seamlessly connect to the recently completed multi-use Empire State Trail. It illustrates a new wave of targeted and transformative investments in the economic and regional potential of Albany’s historic downtown. As we look to build upon this work to reimagine more of I-787 to reclaim and re-access Albany’s riverfront, the Skyway will help to reinvigorate our local economy and adjacent neighborhoods. Thank you to Mayor Sheehan, the Albany Common Council, and Governor Hochul for their work in bringing this project to fruition.”

The Skyway also features pedestrian lighting, seating and planters along the path and a shade structure near the Broadway entrance. Amphitheater-style seating provides a restful setting with a view of the Hudson River.

The Skyway builds on the success of New York State’s landmark Empire State Trail, which is the nation’s longest multi-use state trail. Completed in December 2020, the trail spans 750 miles and runs from New York City through the Hudson and Champlain Valleys to Canada, and from Albany to Buffalo along the Erie Canal. It provides a safe and scenic pathway for New Yorkers and tourists to experience New York State’s varied landscapes.

Crosswalks, high-visibility crossing signs and push-button beacons are provided for users to access the Skyway across Quay Street at the north and south ends of the Corning Riverfront parking lot. Users crossing Quay Street from the Corning Riverfront lot are reminded to use the crosswalks and push-buttons that will activate the flashing beacons. Motorists are reminded to slow down approaching the Skyway and crosswalks and be alert for the presence of pedestrians and cyclists.

Assemblymember John T. McDonald III, RPh said, “It is an exciting day to enjoy the opening of the Albany Skyway. Connecting the City of Albany to the Corning Riverfront and providing access has been a long awaited project. Thank you to Governor Hochul, City of Albany Mayor Kathy Sheehan, and all of my state and local partners who came together to make this project a reality.”

The Livingston Avenue Passenger Rail Bridge project will replace the Civil War-era passenger rail bridge built over the Hudson River in 1865, which currently connects Rensselaer and Albany by rail and provides a critical path for passenger rail service from New York City to Western NY. Deterioration of the current structure, owned by CSX and leased to Amtrak, limits trains crossing to one at a time at speeds of 15 MPH. The new bridge will accommodate improved passenger service.

Albany County Executive Daniel P. McCoy said, “When people are deciding where they want to live and work, they look for unique features and fresh ideas like the new Albany Skyway that go above and beyond the basic amenities. This elevated park not only connects Downtown Albany to the riverfront and exciting recreational opportunities, but it stands on its own as a space for people to gather and enjoy the outdoors. Nothing great can be done without a partnership, and I want to thank Governor Hochul and Mayor Sheehan for their vision on this project that will help fuel the continued revitalization of this neighborhood and attract more private investment in the future.”

The current movable swing bridge would be replaced with a new lift-type bridge which would bring the structure up to modern standards for height, width and speeds for passenger and freight trains and more reliably accommodate marine traffic using the Hudson River. The new bridge will be located south of the existing bridge on a parallel alignment and would carry two railroad tracks. The approach track work will include improvements to the triangular junction of rail tracks on the Rensselaer side to facilitate train turning movements and the rehabilitation and reconfiguration of the rail bridges over Water and Centre Streets on the Albany side. The new bridge will also include a separated shared use path connecting to the Albany Skyway and Empire State Trail to the City of Rensselaer.

New York Department of Transportation Commissioner Marie Therese Dominguez said, “The Department of Transportation is proud to help lead the transformation of the Albany Skyway and Livingston Avenue Railroad Bridge, which will provide new recreational opportunities for those who live in, work in and visit the Capital Region. The new urban parklike setting of the Skyway shows how underutilized infrastructure can be modernized and used to benefit all communities and reconnect our neighborhoods with their natural environments, while the new railroad bridge will help connect two cities on both sides of the Hudson River. These projects exemplify the vision for renewal that Governor Hochul has made a hallmark of her administration and the Department of Transportation is honored to be leading these efforts.”

All images courtesy of the Office of Governor Hochul.