This $51 billion proposal would add a new train hall south of Penn Station, replace the Port Authority Bus Terminal, and add up to 1400 units of new affordable housing.

Replacing the depressing—and scary for many visitors—old Port Authority Bus Terminal (pictured at top) will do wonders to revitalize Manhattan’s Midtown West neighborhood.

The Port Authority of New York and New Jersey will replace the outdated terminal with a new state-of-the-art facility to better serve the over a quarter million daily passengers. The project will not only reduce congestion on city streets and improve air quality but will transform mass transit to and from the West Side of Manhattan. 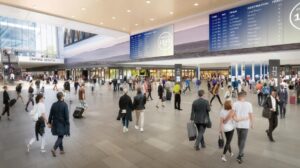 The plan also calls for redeveloping the Empire Station Complex.

With the completion of the Moynihan Train Hall (previously reported here in REVITALIZATION), which opened to the public on January 1, 2021, the State will turn its attention to the existing Penn Station, just across the street. 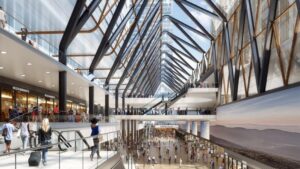 The State will start on a comprehensive $16 billion project to reconstruct the existing station and add track capacity.

By acquiring property south of Penn Station, we can expand the complex to 40 percent more train capacity and at least eight additional underground tracks to cut down on delays and improve operations for the more than 600,000 passengers it serves daily.

The project is one part of the governor’s proposed $306 billion infrastructure renewal initiative.

In 2021, New York State will construct a new green energy superhighway of 250 miles. The $2 billion project will create opportunities to maximize the use of renewable energy for the parts of the state that still rely on polluting fossil-fuel plants.

Construction has already started on the New York Power Authority’s 86-mile Smart Path project from Massena to Croghan, and construction will soon start on several key projects in Western New York, Mid-Hudson, and the Capital Region.