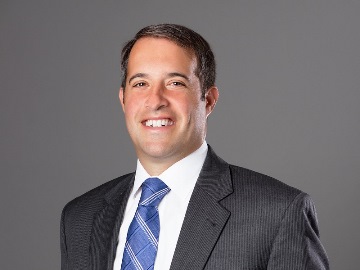 This Guest Article for REVITALIZATION was written by Andrew Greenwood.

Currently in Indianapolis, Indiana, there is a great deal of buzz about development and urban renewal. We’ve experienced a renaissance as the city has grown with an influx of companies and jobs that have fueled the transformation of Indianapolis urban core.

The Waterside redevelopment project is on the forefront of this excitement. According to the Indianapolis Star, “[Waterside] could become one of the most important projects in the city’s history.”

Waterside is a highly unique project: how often does one get the opportunity to do a sustainable redevelopment of over 103 acres in a downtown area?

This massive property is adjacent to the 362-mile White River (thus the “Waterside” name), and is located at the site of a former General Motors Stamping Plant, Chevrolet Division.

This abandoned GM site used to throb with economic activity. Starting at the end of the 19th Century, and continuing up until the 21st Century, this location in Indianapolis was the manufacturing site for a large volume of buggies and automobiles.

Originally the Parry Manufacturing Company, it produced 1,000 buggies and carts per day, and employed 2800 employees. In 1896 Parry became the largest buggy manufacturer in the world. By 1916, as automobiles began to dominate transportation, Parry shifted its focus to auto trailers and truck bodies. 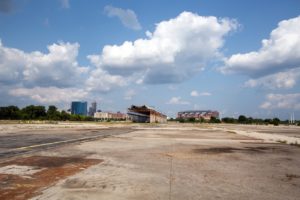 In 1919, Parry merged with Martin Manufacturing and continued making truck bodies until 1930 when the site was sold to Chevrolet. From 1930 on, Chevrolet/General Motors continued production on the site. By 1979, the plant employed more than 6000 people.

In 2011, following General Motors bankruptcy, the plant was forced to close its doors and the property was transferred from GM to the Revitalizing Auto Communities Environmental Response Trust (RACER Trust).

After publicly requesting proposals from developers, the RACER Trust and the City of Indianapolis in 2017 chose Ambrose Property Group to redevelop the site.

Ambrose Property Group is a recognized leader in real estate ownership, development and construction in Indianapolis. While the group started out small, Ambrose has steadily scaled operations into one of the industry’s most recognized leaders completing over $1 billion of commercial real estate transactions. 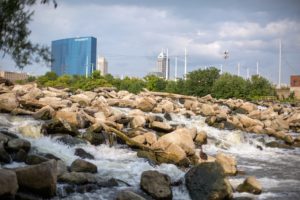 Ambrose, as the sole owner of Waterside, is the master developer of the site and will be responsible for the construction and completion of the proposed projects. As a part of its original proposal to develop the site Ambrose has committed to blending people focused urban design to create a new standard of livability, connectivity and sustainability.

In October 2018, Ambrose announced a name and vision for the 103-acre site, calling it Waterside. The plan demonstrated the firm’s dedication to integrating the natural environment—the White River—as an essential component in the redevelopment of the space.

Nearly everything on the once-bustling site was demolished in 2014 except for one historic structure; an Albert Kahn-designed crane bay. Albert Kahn was the most influential industrial architect in America and founder of the still-active Kahn Architecture firm.

Kahn was known for revolutionary design leveraging new materials and natural light. His work both set a standard for industrial plants and safety, by replacing wood with reinforced concrete and reducing the number of factory fires around the world.

Waterside will look back to Albert Kahn’s history of innovative design, natural light and bold ideas, creating a new place within the heart of Indianapolis that inspires this and the next generation.

Development of the former General Motors stamping plant between Indianapolis’ west side and downtown, represents a rare opportunity for the city to add an entirely new neighborhood, based on the idea that our built environment shapes our lives and our aspirations.

This project is intended to reshape the city’s identity well into the 21st Century and produce a new standard of livability and sustainability while engaging with the water for the first time in a long time in Indianapolis.

Waterside will seamlessly integrate into its surrounding neighborhoods and create office, commercial and retail space, residential units, hotel, community green space and recreational opportunities all along the river. Ambrose aims to harness the power of design, nature and urban planning to expand Indy’s core. 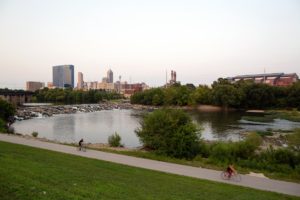 With 750 households, a history of isolation, and a feeling of neglect, this neighborhood is a shining story of resilience. The flood of 1913, which remains Indiana’s largest natural disaster, dramatically impacted the homes in The Valley, with numerous homes still having flood water lines in basements and on wallpaper still visible today. 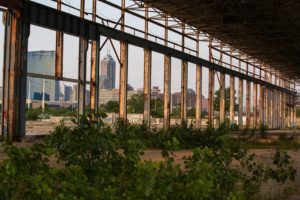 In addition, the DigIndy project is a $2 billion reconstruction of the 28-mile urban sewer pipe under the city will separate the storm and sanitary sewer systems and effectively clean the White River. This enormous undertaking is being completed by Citizen’s Energy, and is halfway to completion.

“Eliminating sewer overflows protects human and environmental health,” said Indianapolis Mayor Joe Hogsett. “Cleaner rivers and streams are an asset to the Indianapolis community.” The project has already helped restore Indianapolis’ waterways, making them cleaner than they’ve been in 100 years.

Repurposing and renewing the Waterside site will dramatically expand downtown Indianapolis, reconnecting it to the river and creating a seamless transition from downtown to the west side. 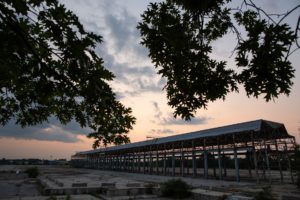 Perhaps most exciting, it will stand as a new standard of livability, sustainability and connectivity in Central Indiana; a special place where people come first and everything a resident needs is accessible within a 20-minute walk or less.

Ambrose anticipates creating more than 12,000 jobs, doubling what General Motors once offered here at its peak. Construction is scheduled to begin in 2019. The over $1.3 billion project will be in construction over the next fifteen-plus years.

The entire redevelopment site and the Crane Bay are visible from Interstate 70, from airline flights entering Indianapolis, from visitors to the Indianapolis Zoo and at the JW Marriott, and many other downtown landmarks.

Impossible to overlook, it’s hoped that this thoughtful and productive investment in design excellence along with the river will play a large role in driving both the identity of Waterside and create a new standard of development for the Central Indiana region.

UPDATE: On September 27, 2019, Aasif Bade–Founder and CEO of Ambrose Property Group—emailed me (Storm Cunningham) to let me know that Ambrose is giving up on this project, and will offer the Waterside property for sale. 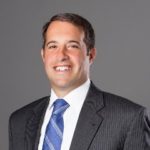 Andrew Greenwood is Senior Vice President of Development at Ambrose Property Group. As such, Andrew is responsible for the pursuit and execution of development projects. Prior to joining Ambrose, he was General Counsel and an Owner of Old Town Development where he oversaw all legal and development projects for the company and was involved with projects ranging from the development of small and large residential subdivisions, to building multi-family apartments, to mixed-use buildings in the Carmel Midtown redevelopment. Andrew earned his Bachelor of Science in Public Finance with Minors in Business and Economics from Indiana University (Bloomington) and his Doctorate of Jurisprudence from Hofstra University. Andrew enjoys spending time with his wife and his three children. His hobbies include coaching youth sports, basketball, golf and reading.

Ambrose Property Group is an Indianapolis-based commercial real estate firm specializing in development, acquisition and ownership of office/mixed-use, e-commerce and health care properties. Ambrose employs a customer-centric approach with a commitment to clients, partners and the community. The locally owned company’s wide portfolio of properties and full range of services establish the firm as an industry leader in Indiana.