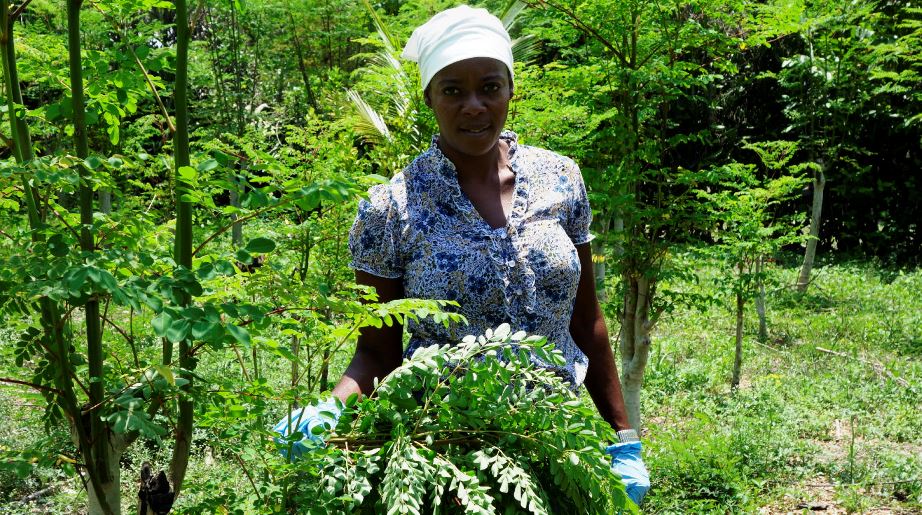 Today, only two percent of Haiti’s original forest remains, and the area hardest hit by the October 2016 hurricane was one of the few remaining lush areas in the country, reducing small trees, crops, and fertile top soil. With agriculture accounting for only 20 percent of Haiti’s Gross Domestic Product — second only to commerce — much work needs to be done to replenish the land for sustenance.

In an effort to help Haiti recover some of its forests and assist farmers in growing crops, a U.S.-based company called Kuli Kuli has partnered with the Smallholder Farmers Alliance to plant fast-growing moringa trees through a method called agroforestry, a process in which farmers plant a variety of trees to diversify crops, replenish Haiti’s soil and reduce erosion.

Moringa is also used locally in Haiti as a food source for farmers and locals alike. Because of its growth rate, moringa leaves can be harvested after just six months of planting. Seeds, tools, and training are provided to local farmers who then cultivate and harvest the moringa leaves for local produce and export to the global market. Kuli Kuli pays for the leaves at above-market value through Smallholder Farmers Alliance and, in turn, brings income, education, and nutrition to Haiti with the added benefit of reforesting the land.

Planting moringa trees could potentially help minimize the damage of future storms by helping prevent erosion and protect other plants from high winds. By increasing the number of trees on the island — coupled with infrastructure improvements, such as paved roads — Haitians will be able to create root systems, improve water drainage, and increase food supply.

Lisa Curtis and friends in Haiti.

Kuli Kuli is America’s leading brand of moringa-based products. Kuli Kuli’s founder Lisa Curtis got her first taste of moringa as a Peace Corps volunteer in a small village in Niger . As a vegetarian, she was eating mostly rice and millet — a diet that left her feeling sluggish. When she mentioned her fatigue to women at the community health center, they suggested she try moringa.

She bought moringa leaves from a neighbor’s tree and mixed them with a popular peanut snack called kuli-kuli. She soon felt better and began to work with villagers to encourage them to use moringa. Lisa founded Kuli Kuli to help women in West Africa use more moringa locally and earn a sustainable livelihood by selling a portion of each harvest to the US.

After returning to the US, Lisa, along with co-founders Valerie Popelka, Jordan Moncharmont, and Anne Tsuei, launched Kuli Kuli through an Indiegogo crowdfunding campaign which raised $53,000, making it the most popular food campaign Indiegogo had ever had at the time. In 2015, Kuli Kuli announced an initiative with Whole Foods Market, the Clinton Foundation’s Haiti Program, and the Smallholder Farmers Alliance to plant hundreds of moringa trees in Haiti and sell a Moringa Green Energy Shot made with Haitian moringa.

They’ve already planted some 200,000 trees on these deforested slopes. That stabilizes the soil, eventually allowing native plants to get reestablished.

As part of this new initiative, Kuli Kuli launched a second crowdfunding campaign that raised $100,000 from over 500 people. This ambitious new project will help reforest Haiti with drought-tolerant moringa trees while providing Haitian smallholder farmers access to the growing market for moringa leaf powder. We are continuing to grow our moringa supply chain by providing fair, sustainable wages to farmers and women-led coops around the world.

“Moringa is one of the few plants that grows well with very little water and in poor soil,” says Lisa Curtis. “This makes it the perfect plant for Haiti, which has been in a drought for the past five years and has poor soil due to high rates of desertification and the after-effects of the hurricanes.”