Much of the initial attention from infrastructure funding was focused on broadband and electronic vehicle deployment.

But now, other funding sources are getting lots of attention and bridge repair and replacement is occurring throughout the country.

The bipartisan infrastructure bill provided $5 billion per year until 2026 just for bridges. That funding is encouraging state and local officials to reimagine how they deliver bridge projects. 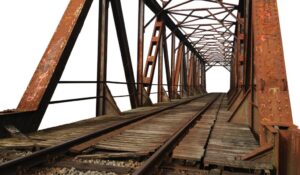 In 2021, it was reported that US bridges had accrued a $125 billion backlog of critical maintenance needs. That was because 42% of them had been in service for more than 50 years.

The same report found that it could possibly take 50 years to complete the backlog of critical bridge maintenance projects that would be required. That sobering news most likely encouraged elected officials to prioritize expediency related to repairing or replacing bridges in America.

Earlier in 2022, the state of Missouri established a firm precedent for design/build delivery of historic bridge projects.

The Missouri Department of Transportation requested proposals for the design/build of its $243 million Chester Bridge project and a contract to a design/build team could be awarded as early as March 2023.

A $75 million bridge project in Washington’s Clark County will call for a design/build team to replace the East Fork Lewis River bridge. Proposals will be requested in March of 2023.

Despite being categorized as structurally deficient, the steel truss bridge services 38,000 vehicles — including nearly 7,000 large commercial freight vehicles — daily. The bridge was constructed in 1936 and mounting maintenance costs and disruptions to service have heightened the need to replace the structure.

Historic bridge projects are being reimagined not only because of available funding but also because of incredible new technological developments. Accelerated Bridge Construction is changing how state transportation departments plan, design, and construct bridges without interrupting traffic.

On Cape Cod, Massachusetts, an accelerated bridge is projected to cost more than $1 billion. Construction is forecasted for 2026.

The Cape Cod peninsula juts into the Atlantic Ocean and its connectivity to mainland Massachusetts depends almost entirely on two bridges that were built in 1935.

Those bridges — the Sagamore and the Bourne — are no longer capable of meeting modern transportation demands. The project will include prefabricating and building components off-site as the existing bridge is removed.

A $400 million project in New York, slated to launch in 2023, will replace a bridge that has served as a lynchpin for rail travel along what has been one of the country’s most heavily used transportation corridors for over a century.

The environmental review period has ended and the final design work for replacing the Livingston Avenue Bridge will proceed. Currently, the bridge’s deterioration has caused trains to cross in single-file and at speeds no greater than 15 miles per hour.

The Federal Lands Highway Program has become yet another source of funding for bridges.

As an example of this program, an allocation of $25 million has been announced to repair and preserve Gardner River High Bridge, located in the Wyoming-based portion of Yellowstone National Park.

This bridge was built in 1939 and federal funding will be available for a project launch in late 2023 or early 2024.

Another $13.1 million allocation will support a project to replace the Sun River Bridge in Montana’s Lewis and Clark County. The project will focus on a 105-year-old, 225 foot long, single lane, structurally deficient bridge that has historically provided access to numerous state and federal public lands.

These projects are just a small sampling of the type of upcoming opportunities that will be available in 2023 and 2024. A lack of funding has held public officials back from addressing critical infrastructure needs in past years, but that obstacle has been removed.

Not only is funding available, new technology and construction methods are being embraced because of the speed and sustainability that they offer. America is moving quickly now to enhance its infrastructure, and bridge repair is at the top of the priority list.

Now is the time for interested contractors to approach public owners to ask for more detailed information about projects of interest. Planning documents, design outlines and cost projections are available for the asking.

The public at large, and especially the citizens who travel across the bridges, are the primary benefactors, but many regions will also benefit from job creation and economic vitality.

America’s global competitiveness will be enhanced, and taxpayers will benefit because the country’s infrastructure assets will be upgraded and preserved for another century if this type of work continues.