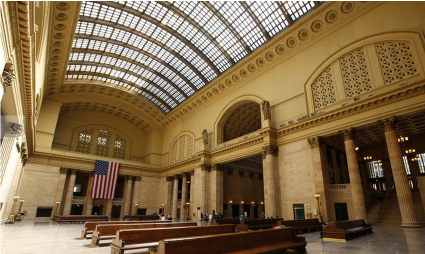 Amtrak is betting millions of dollars to transform Chicago’s Union Station into an entertainment and tourist destination, complete with restaurants and outdoor cafes, retail, a hotel and even a grocery store, Getting Around has learned.

Amtrak wants to open up thousands of square feet of space long closed to the public, literally throwing open the doors to the 90-year-old building in a bid to return the landmark station to its heyday in the 1940s and ’50s.

Hidden deep inside Union Station are palatial rooms with 33-foot-high ceilings and assorted alcoves that have been mothballed for decades. During the golden age of passenger rail, those spaces were filled with ritzy restaurants, coffee shops (including the fabled Harvey House), a dance hall, tailoring shops specializing in custom suits, law offices and more.

The goal is to transform Union Station into a traveler and visitor’s venue that tops the highly successful retail and food and beverage offerings at Union Station in Washington, D.C., as well as at highly touted rail depots in Seattle and Denver, said Paul Sanders, Amtrak senior manager of facilities management at Chicago’s Union Station.

It’s a venture that would have been doomed from the start as recently as 10 or 15 years ago, when “hardscrabble” would have best described some of the streets around Union Station. But the neighborhood has changed, office and residential buildings have shot up and some experts think the West Loop is ripe for more commercial and residential development.

“The West Loop is a hot real estate market, and Union Station is overdue to get a piece of the action,” said Joseph Schwieterman, director of the Chaddick Institute for Metropolitan Development at DePaul University. “It’s remarkable these great spaces in the station have sat empty for so long.”