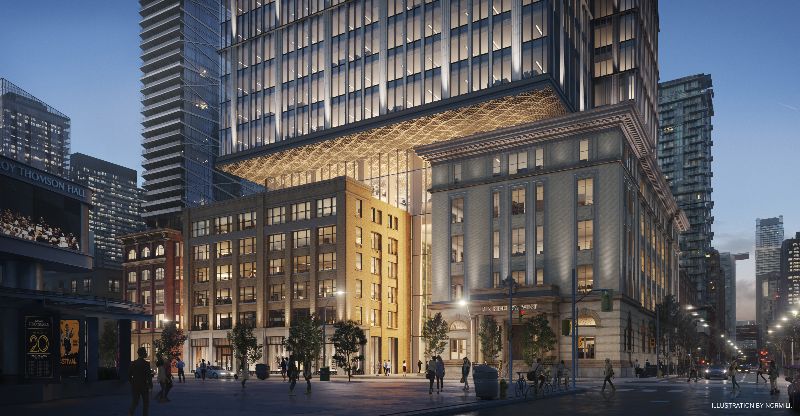 On December 10, 2020, New York-based SHoP Architects and Canadian firm Adamson Architects were appointed by Dream Office REIT and Humbold Properties to design a true mixed-use tower at the redeveloped northwest corner of King and Simcoe Streets in Toronto, Ontario, Canada.

Climbing 79 stories (310 meters), 212 King Street West is located at the intersection of the Financial District and the Entertainment District, opposite the famed Roy Thomson Hall. 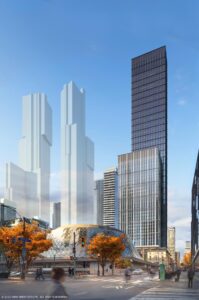 Celebrating three prominent early 20th Century heritage buildings, including 212, 214 and 220 King St. W., the tower will take advantage of its location by introducing a mixed-use development. With 588 rental units, over 10,000 sq. ft. of high-quality retail and 660,000 sq. ft. of office space, the project brings significant employment space to the city core.

Humbold has been in the neighborhood for decades, having bought the building at 214 King St. W. from Canadian General Electric in 1976 and has witnessed the drastic transformation of the area to the Entertainment District it is today. These changes include the removal of the former industrial rail yard to construct Roy Thomson Hall and Metro Hall.

“We believe and continue to believe that demand for incredibly well-located and designed mixed-use buildings will increase as residents and tenants expect to have it all. With a strong focus and importance placed on amenities, transit, connectivity to the city, outdoor spaces, and a serious approach to health and wellness,” says Michael Cooper, Chairman and CEO of Dream Office REIT. “212 King Street West will become the best address in the city.” 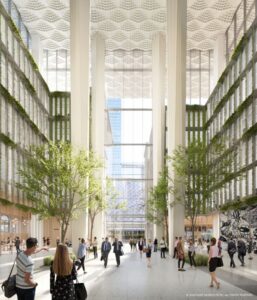 Drawing inspiration from the history, materiality and character of the existing buildings, the development and design aims to prove that a sensitive, civic-minded approach to skyscraper design is possible.

The selection of SHoP Architects was driven largely by their proven track record when it comes to blending heritage with contemporary design. Of the three projects in New York City’s history to be granted permission to integrate a tower into heritage-designated buildings, SHoP is the designer of two: 111 West 57th Street and 9 DeKalb Ave.

“We are excited to unveil a design that not only honours our city’s rich architectural history but injects new energy into the downtown core. We are thrilled to be partnering with Dream to create a new vision for this unique intersection and to carry these buildings’ legacies on for generations to come,” says Robert Singer, Vice-President of Humbold Properties.

SHoP Architects founding principal Gregg Pasquarelli says true innovation in skyscraper design is predicated on the ability to achieve height while maintaining the ‘soul’ of a building.

“We know we have to move forward and innovate, but we need to do so in a way that demonstrates sensitivity and sensibility, and contributes to the life of a city,” says Pasquarelli. “The soul of the building lies in the intensity of details. It’s the materiality, the connection to Roy Thomson Hall and David Pecaut Square, and the way light fills the atrium and creates a relationship between the indoors and outdoors. These are the things that resonate and create an emotional response.” 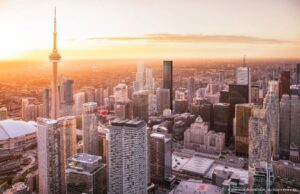 When it came to the existing heritage buildings along King Street, the goal was to be respectful and celebratory, skillfully interlocking the residential and commercial floorplates in a way that sparks a dialogue between the historical and contemporary components of the project. Generous setbacks and recessing of the tower are intended to give the buildings at-grade the space needed to maintain and enhance their presence along King Street.

A civic-scaled atrium that doubles as the office lobby welcomes the public in, creating visual connections to the aforementioned Roy Thomson Hall. The atrium, which will connect to the underground PATH, is designed to activate the building year-round and will be adaptable to host special events. Access to heritage rooftop spaces via two express elevators, provides sweeping views of vibrant downtown life.

The conceptual approach to the public realm extends to the outdoors, building upon the King Street Transit Priority pilot project objectives. Space is carved out and reclaimed for the public realm, while a widened sidewalk creates opportunities for outdoor café space, enhanced pedestrian circulation, street furniture and greenery. The design is flexible to allow for day-to-day city life as well as special events where the entire street is opened to pedestrians.

Featured image (by Norm Li) shows restored heritage buildings on King Street, emphasizing the public realm with outdoor cafe spaces, enhanced for pedestrians and street furniture/greenery. All other renderings are by SHoP Architects.