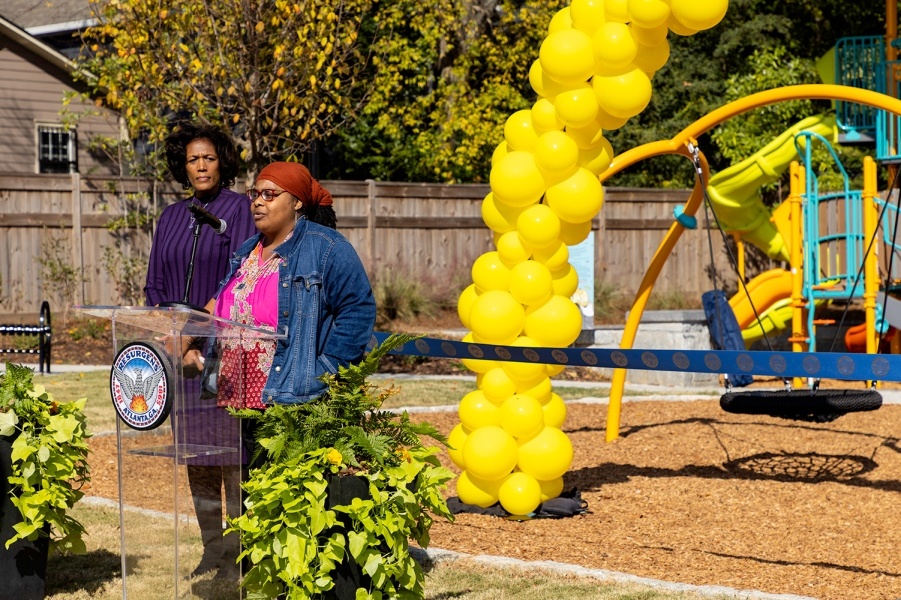 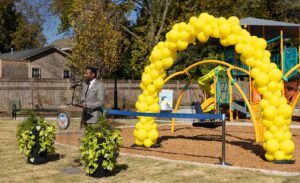 “This is critical to Mayor Dickens’ vision for the city, and it helps to further our goal of bringing quality parks, programs, and amenities within a 10-minute walk of every house in the City of Atlanta,” he added.

Mattie Freeland Park is named for a beloved community matriarch who passed away in 2008. It was Ms. Mattie’s dream to turn what had been an empty lot filled with abandoned vehicles into a clean, safe, beautiful space in which the community could gather, grow food, and play.

“Imagine looking out of your window at a vacant lot and seeing the beauty that it could become; that is what Ms. Mattie Freeland did,” began Mayor Dickens during his remarks at the ribbon cutting.

“Parks make our neighborhoods more livable. Here we are today, 15 years after her passing celebrating Mattie Freeland’s dream to see something beautiful created in her neighborhood. Something that the entire community can benefit from. This is definitely one of those times that I say that Atlanta is a group project,” he continued. 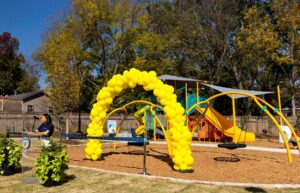 The creation of Mattie Freeland Park was, indeed, a group project, centering around partnership and collaboration.

Since 2009, Park Pride, The Conservation Fund, the City of Atlanta Department of Parks and Recreation, and a multitude of other partners and funders have worked together with English Avenue and Vine City neighbors and stakeholders to transform neglected spaces into vibrant public parks that benefit the community, the environment, and the economy.

“The community saw this space as a park before it was owned by the City. We were pleased to intercede on the City’s behalf and to bring the community’s vision honoring Ms. Mattie Freeland to reality,” she added.

Through an eight-month, community-directed process led by a steering committee of local neighbors and with input from hundreds of area residents, Park Pride’s team of professional landscape architects created a conceptual park plan that reflected the hopes of neighbors for their future greenspace.

This plan was revised in 2018 with funding from The Conservation Fund to incorporate community input for the park in the footprint of acquired land.

“Mattie Freeland Park is an example of what is possible when community comes together around a cohesive vision and has the perseverance to see it through,” said Michael Halicki, Park Pride’s Executive Director.

“This single park showcases the spectrum of services offered by Park Pride. This project was not only a place for us to support community, we learned a lot from this community that will be applied to our work elsewhere,” he continued.

Park Pride also played a fundraising and project management role, working closely with the community at every stage in park development.

“This is a community space,” stated Dr. Mironda Williams, granddaughter of Mattie Freeland, speaking at the ribbon cutting on behalf of her family, “envisioned by community, championed by community, and then built by the community. This is a safe space that speaks of generational blessings.”

Billie Walker—an English Avenue resident, leader of the Friends of Mattie Freeland Park, and a park ambassador—also addressed those gathered. During the years while the park was still an empty lot, she engaged neighbors to activate the space through cookouts, movie nights, and volunteer cleanup events.

Walker was also a key partner in soliciting community input during park visioning, ensuring that the planning process was inclusive and that all members of the community were heard.

“We did not look at skin color or economics,” Walker said during the ribbon cutting ceremony. “When we host activities, we serve. I am proud to be an English Avenue resident and to live out the legacy of Ms. Mattie Freeland.”

Now, complete with a beautiful new playground, a grilling area that includes a pavilion and picnic tables, and a rain garden, Mattie Freeland Park will serve as a valuable amenity to all members of the community, providing English Avenue residents a place to relax, exercise, play with their families, and meet their neighbors.

Additionally, artistic educational panels in the playground will share culturally relevant imagery and information, including the histories and stories of home-grown heroes, Gladys Knight and Maynard H. Jackson, Jr. Created by local artists Osaze Akil and Muhammad Suber (Artist InUs), the panels highlight the natural and cultural experience of living in the English Avenue neighborhood.

“This park is the people’s park,” said District 3 Councilmember, Byron Amos. Speaking to the partners, funders, and community members gathered, he continued, “To all of you, thank you, because this is a dream come true for a lot of people, families, and for the community itself. We have all seen the dark days. But as they say in the Bible, ‘This is the joy that cometh in the morning.’”

Photos courtesy of The Conservation Fund.