On September 6, 2018, the $38 million Chautauqua Harbor Hotel celebrated its grand opening on the shores of Chautauqua Lake in Western New York. The hotel is located on a nine-acre parcel that was once home to the Celoron Amusement Park, which closed in 1962.

The design of the hotel pays homage to the history of the Village of Celron, including the amusement park and comedy great Lucille Ball, who was born in the community. 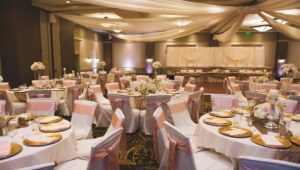 Celoron Mayor Scott Schrecengost said, “The Village of Celoron has been working tirelessly for many years to revitalize its waterfront. With the help of funding from the New York State Environmental Protection Fund we were able to complete a Local Waterfront Revitalization Plan which identified a hotel as a use for this vacant waterfront parcel. It is with great pleasure that we see the implementation of one of the plan’s recommendations and welcome the Chautauqua Harbor Hotel to the Village of Celoron.”

The Chautauqua Harbor Hotel, located at 10 Dunham Avenue in Celoron, features 135 luxury guest rooms and suites, many with patios and views of beautiful Chautauqua Lake. Other features include: 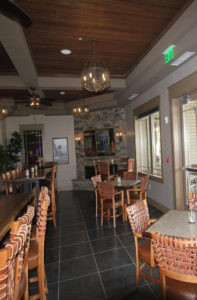 “This administration is focused on growing the region’s tourism economy, supporting projects like the Chautauqua Harbor Hotel and the new highly acclaimed National Comedy Center, and fostering job creation to build a stronger economy for all of Western New York,” New York Governor Andrew M. Cuomo said. “I thank the hard-working men and women who helped build this beautiful hotel from the ground up, and look forward to welcoming more visitors to the Empire State as a result of these efforts.”

The property also boasts a lakeside Carousel Bar that pays tribute to the grand carousels of yesteryear. The bar is connected by footbridge to Sunset Island offering an unparalleled setting for wedding ceremonies, private receptions, and performances.

“Tourism is one of the fastest growing sectors of our economy in New York, and we are working every day to support projects like the Chautauqua Harbor Hotel which build upon our progress,” said Lieutenant Governor Kathy Hochul. “With so many new attractions like the National Comedy Center, tourism in Chautauqua County and Western New York is creating jobs and investment like we have not seen in generations. The Chautauqua Harbor Hotel is yet another example of the continued economic resurgence of Upstate New York.”

With the opening of the Chautauqua Harbor Hotel, Hart Hotels Inc. and Krog Group have completed one of the largest private sector fueled, tourism-based developments to take place in Chautauqua County. The hotel’s opening is perfectly timed to accommodate visitors from the new National Comedy Center in Jamestown, another New York State supported project, which opened to rave reviews in August.

David Hart, President and CEO of Buffalo-based Hart Hotels, Inc., said, “We are thrilled to open Chautauqua Harbor Hotel, the third New York State hotel in our Harbor Hotel Collection, and bring world-class, waterfront accommodations and state-of-the-art conference facilities to the region. As we’ve seen in other markets, our hotel guests will also patronize local attractions, shops, and restaurants creating significant synergistic economic activity. We thank New York State for helping make this project a reality and for investing in the future of Chautauqua County and its residents.”

The Chautauqua Harbor Hotel is Krog’s and Hart’s third and largest hotel in New York State. In 2008, the 104-room Watkins Glen Harbor Hotel opened and was recently voted by USA Today as the best waterfront hotel in the country. In 2014, Krog Group and Hart Hotels opened the 105-room 1000 Islands Harbor Hotel in Clayton, New York, along the St. Lawrence River. 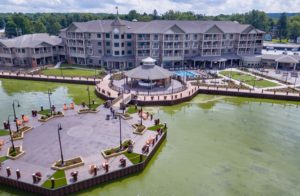 Senator Catharine Young said, “Our region’s exciting renaissance continues with the opening of the spectacular Chautauqua Harbor Hotel. Ideally located on the shores of beautiful Chautauqua Lake, this world-class resort and the tourism and business activity it will generate are poised to accelerate our area’s transformation into a thriving destination for recreation, culture and economic opportunity. My congratulations and thanks go out to Hart Hotels and the Krog Group, the developers whose vision, perseverance and investment made this wonderful achievement possible, and to Governor Cuomo for his steadfast commitment to Western New York’s economic revitalization. By working together, we are achieving great successes for our community and building the bright future we deserve.”

New York State Homes and Community Renewal Commissioner RuthAnne Visnauskas said, “Thanks to Governor Cuomo’s leadership, the CDBG program is making strategic investments in projects that create good paying jobs, generate growth in the local economy and make New York an even more attractive destination for visitors near and far. The luxurious Chautauqua Harbor Hotel will reinvigorate Chautauqua County and all of Western New York. We are delighted that HCR’s $750,000 award enabled the completion of this exciting new business.”