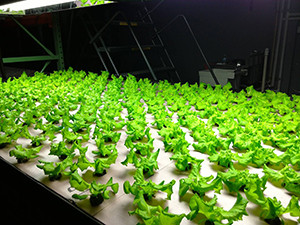 Thanks to a new urban agriculture enterprise, the future is brighter for Detroit’s Brightmoor neighborhood—an area on the west side of the city that has seen so much economic devastation that it was nicknamed “Blight More.”

Jeff Adams, a Brightmoor resident for the past 12 years, founded Artesian Farms, an indoor vertical farming operation that saw its first harvested crop in spring 2015. And there will be quite a bit of harvests to come, as they are scheduled to take place 17 times a year.

“This idea has been percolating for the last two years or so,” says Adams. “I gained perspective on problems that face under-resourced communities.”

“We want to create solutions for people, and to transform blighted buildings back to life,” he says. “People want flavorful food in the neighborhood and beyond.”

Adams raised $300,000 to get Artesian Farms off the ground, mainly through low-interest loans from foundations interested in his work and in revitalization of Detroit.