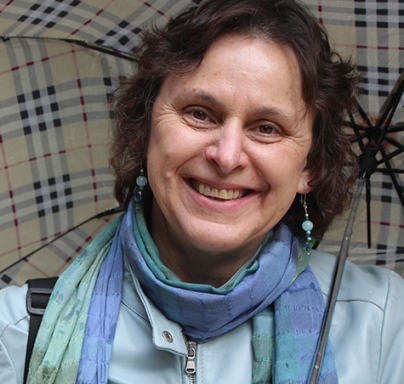 The following is an excerpt of an interview of Patricia O’Donnell, FASLA, AICP, Fellow, US/ICOMOS by Jared Green. It was conducted at the ASLA 2019 Conference on Landscape Architecture in San Diego.

GREEN: Over your career, you’ve worked on more than 500 cultural landscape projects. You have highlighted Pittsburgh’s $124 million investment in revitalizing its public spaces, such as the Mid-Century Modern Mellon Square, which you restored, as a model. What does Pittsburgh know that perhaps other cities need to learn? 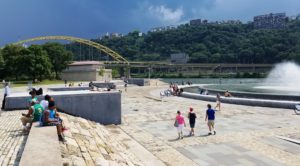 In the 19th century, Pittsburgh had a vision of setting aside major green spaces in order to shape the city. Neighborhoods grew up around the green spaces. Since Pittsburgh is still today a neighborhood-based city, everyone cares deeply about their green assets. Pittsburgh has a history of understanding the value of parks.

Pittsburgh looked at their historic parks and said, “This has value for the city.” The revitalization effort was initiated by the very bright Meg Cheever, a lawyer by education and a publicist by application who founded the Pittsburgh Parks Conservancy. She knew she needed to grab attention so she built up the Conservancy as a real partner to the city. She was very savvy about not having an adversarial relationship with the city, instead creating a true partnership. We’ve worked in a number of conservancies, and that coin can flip both ways. The first thing is you need to be a partner; the second thing is you have got to recognize value.

When I started my firm in the late-80s, we did a project in Gilford, Connecticut. I told them there are four groups of tools for improving the public realm: community engagement, plans or advisory tools, law or regulation, and finance. As landscape architects, we’re good at community and planning, not necessarily so good at legislation or finance. If we recognize those are the four things we need, we can figure out who to partner with and what skill sets and mindsets are needed to move forward.

Pittsburgh started with its 19th century legacy. They had three big parks: one that was gifted to the city in the early 20th century by Henry Clay Frick; Mary Shenley’s property, which the city had bought and then added to Shenley Park; and Highland Park, which was around a reservoir and then grew into a park. So each park had a different vector. Then, they focused on the Mid-Century Modern pieces: The Point and Mellon Square, which were the two iconic public spaces built in the 50s and part of the first Pittsburgh Renaissance. Those spaces became elements of a national model for urban renewal. They knocked down 25 percent of the core of the city in a 10-year period and rebuilt it.

Now there’s good and bad there. There was some environmental injustice and other problems, but they also renewed the core of the city and rebranded Pittsburgh. A number of other cities followed that path of renewal. (We called it urban renewal but often it was urban destruction). But the initiative worked for Pittsburgh. They were able to lift up what was a gritty steel city where industrial workers had to bring a minimum of two shirts to work because the air quality was so bad.

GREEN: Your firm, Heritage Landscapes, partnered with HOK on the restoration of the National Mall in Washington D.C. What was involved in that process? 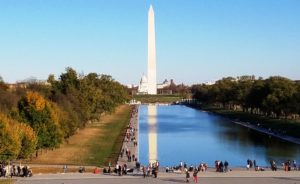 We were asked by the National Park Service (NPS) to track the history of Mall, which they framed as from L’Enfant’s 1792 plan to the present. The NPS asked us to framed it by the plans, but the plans did not reflect what the Mall actually was. We carried out this project as part of a NEPA compliance process.

Through a mapping effort, we overlaid all the soil disturbance over time — deep subsurface, shallow subsurface, surface — in CAD and made this very fun color map that showed probably a couple of teaspoons of the Mall were not altered over time. While we met NEPA compliance, we also now had the background, understood what the design was, and how the design of the Mall evolved to what we love today.

That evolution happened because of the strength of the personality and the stature of Frederick Law Olmsted, Jr.. He served on the McMillan Commission, the Commission on Fine Arts (CFA), and what is now called the National Capital Parks and Planning Commission (NCPC). He persuaded the NPS to do the plan for the Mall. The linear quality of the green panels was key.

We focused the HOK team on getting the grading right. The Mall had been slightly domed and tipped northward because the Tiber Creek and the Washington Canal — the drainage — were to the north. The Capitol, the White House and the Smithsonian were set on three hills, and so the Mall, the space in between, was kind of mushy. The new shape of the Mall needed to respond to that topography. The original lawn panels had a vertical curve to help drainage.

The NPS wanted the new panels accessible, under a five percent grade and, if possible, under two percent. We had to balance access, sustainability, and history. In addition, the soils were as hard as concrete. And as a result, the most common plant was a small knotweed. Soil experts, James Urban, FASLA, and others, and I thought that grading it under 2 percent wouldn’t work. The lawn panels would continue not drain well and tend toward compaction. We got the NPS to go with at least 1.8 percent, but at the edges we were up at about 4 percent and then 3 percent and then domed, but tipped northward.

To reduce compaction, soil must have open air pores. The team found the best soil for defending against compaction is sandy loam. Investigations addressed whether or not there should be additives in the soil; these little crunchy things that spring back and keep the soil open. The NPS didn’t want to go down that road, so they approved a very good sandy soil mix. The first phase they decided they had a little too much organic matter. They changed it up a little bit on the second phase. We achieved what L’Enfant and Frederick Olmsted, Jr. were after: the long green corridor.

Read full interview in The Dirt.