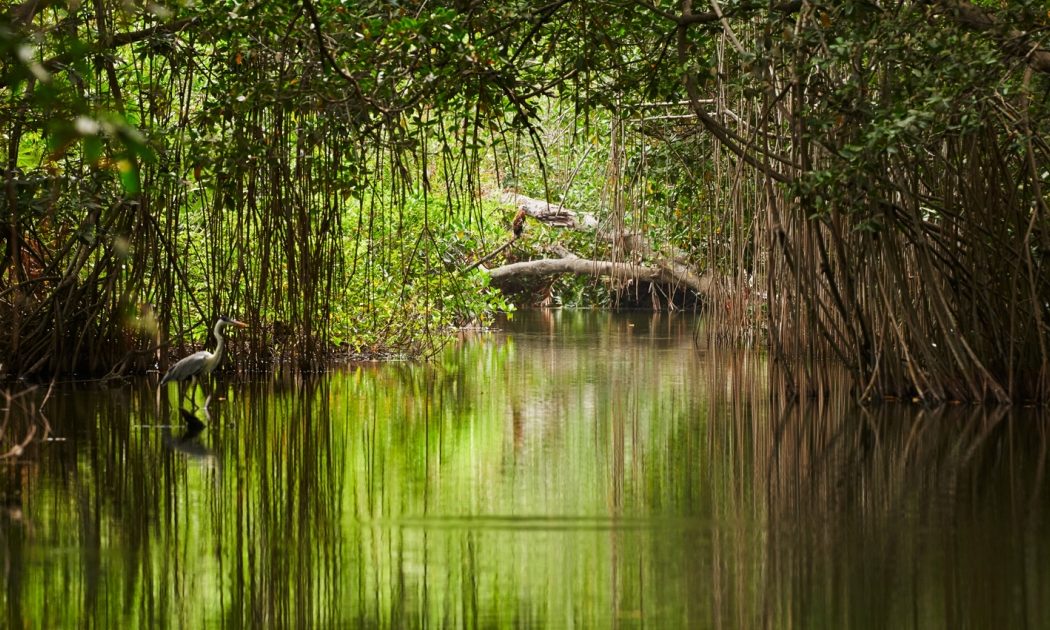 The roots of a mangrove tree are like veins. They rise up and plunge down into the salty waters of Cispatá Bay in Córdoba, Colombia, along the coast of the Caribbean Sea, sprawling in every direction.

A series of channels have formed an arterial highway connecting to the Sinú River, providing single-lane access into and out of the mangroves where fishermen and loggers begin their day’s work. 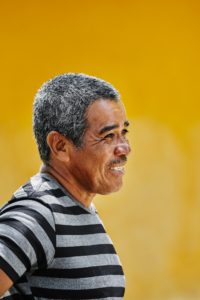 “Right now we have a lot of people working on opening channels to keep the water flowing,” says Luis Roberto Canchila Avila, president of Asoamanglebal, the first mangrove association in San Bernardo del Viento in Córdoba. “Because we are in summer, there are parts where the water flow is different and fish die as they are left without oxygen.” It’s a delicate balance: too much river water or too little salt water, and the mangroves could be destroyed.

The mangroves have long been a lifeline for the coastal communities of Colombia. They protect them from storm surges and provide food and wood supplies to families. They are also a lifeline for the world, sucking carbon out of the atmosphere and storing it deep in their soil below water for centuries. Recent studies show they can store up to 10 times the amount of carbon per acre as land-based forests.

But pressures from illegal farming, fishing and logging combined with climate change are threatening their existence. “There are many illegal groups working in the mangroves,” Canchila Avila says. “They don’t know or care for the sustainability efforts.”

According to Conservation International (CI) ,when degraded or destroyed, mangroves and other coastal ecosystems emit the carbon they have stored for centuries into the atmosphere and become sources of greenhouse gases. They estimate that as much as 1 billion metric tons of CO2 are being released annually from degraded coastal ecosystems.  That’s equivalent to the total annual emissions from cars, buses, aircraft and boats in the US in 2017.

On this humid, sunny April morning, Cispatá Bay is still, save for a few local fishermen waist deep in the sea casting their hand-woven nets. Here, Conservation International and Invemar Research Institute are collecting mangrove soil samples to be analyzed for carbon stored in sediment below the waterline, known as “blue carbon.”

Together with the Omacha Foundation, the three organizations are designing a carbon financing model to incentivize conservation and restoration of mangroves in the region, working in partnership with the local government environment authority (CVS) and the local communities.

As documented here in  the October 1, 2018 issue of REVITALIZATION, for Apple’s Earth Day 2018 Give Back campaign, Apple partnered with Conservation International to protect and restore the 27,000-acre mangrove forest in Cispatá Bay, which is expected to sequester 1 million metric tons of CO2 over its lifetime. 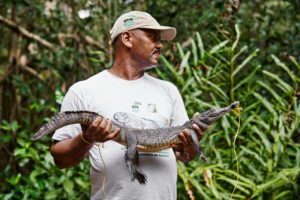 Restoring the mangrove ecosystem is a collaborative effort. Betsabe López Macias is a former crocodile hunter who now works with CI to rehabilitate the local endangered needle-nose crocodile species.

At the Global Climate Action Summit last September in California, Apple’s Vice President of Environment, Policy and Social Initiatives Lisa Jackson underscored the importance of this type of preservation. “These forests are critical because they’re one of nature’s most important tools in the battle against climate change,” she said. “Globally, we’ve lost half of the world’s mangrove forests since the 1940s — so it’s high time we start preserving and protecting them.”

Conservation International’s project is the first in the world to fully quantify blue carbon credits in both trees and soil, and will be a model for scaling carbon sequestration in global mangrove ecosystems and curbing emissions caused by deforestation in these areas.

“We are pioneering this new wetland model,” says María Claudia Díazgranados Cadelo, marine biologist and director of Marine and Community Incentive Programs at Conservation International. “We need to strengthen the way we measure carbon stocks in the soil component of the mangroves. Other methodologies only use above-ground biomass without taking much consideration of the soil, which for mangroves and other coastal ecosystems is the most important place where those ecosystems store carbon.” 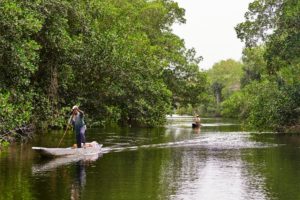 Beyond the bay, there are hundreds of families living and working with the mangroves. The mangleros, as they are called, are part of a network of local mangrove associations formed to conserve and protect the mangroves as well as the communities that rely on them for food and income.

In the neighboring town of San Antero, Cispatá native Ignacia de la Rosa Pérez, manages the relationship between the community and the nonprofit organizations through the Independent Mangrove Association. “I was practically born in the mangroves,” Rosa Pérez says. “When I was a little girl I began to lead expeditions into the woods and explore life. I didn’t know I was a leader, but everyone followed me. That’s how I began leading movements.”

Since 1976, Rosa Pérez has collected decades of data on the mangroves, including details on the animals that live there, the health of the mangroves and the channels that run through them. Binders of maps and in-depth analysis on the characteristics of these coastal trees line two bookshelves in her home office. She holds the greatest collection of data on the region since long before Cispatá Bay was classified as a Marine Protected Area Subsystem, the terms of which also reside in a few binders in Rosa Pérez’s home. 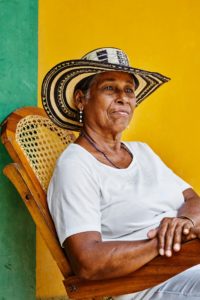 Cispatá native and IMA community representative Ignacia de la Rosa Pérez has been key to the monitoring the state of the Cispatá Bay mangroves since the 1970s.

“We saw the shift in the mouth of the river,” Rosa Pérez says. “We saw changes in the ecological processes from the animals to the forest. Everything continued to change, and finally one mangrove that had been there for three or four centuries shifted onto the land, so as time went by, people began to sustain themselves from the mangroves.”

As Rosa Pérez recalls, the community would sell whatever they could: wood, tree bark, fish and crabs. So when a local politician tried to label the mangrove workers as ecological predators, Rosa Pérez was enraged. While the mangrove workers were accused of destroying the trees through their fishing and logging practices, the reality is the trees were actually dying on their own.

“When I was 3, we would compete to see who could find the biggest tree that was buried,” Rosa Pérez says. “The mangrove had disappeared, maybe because of the salinity or lack of tributaries. That experience resulted in an answer in ’92 … I went out to the salt mines with the mangrove workers. They dug out the dirt with their hands and with shovels. They pulled up the tree to prove they hadn’t cut it down.”

That proof laid the groundwork for a long-term alliance between the local community and CVS, establishing a set of sustainable practices for using the mangroves. Among them is a rotation plan for leveraging the mangroves from only one designated area at a time so that each zone has time to recover and restore itself.

“We’ve begun to speak a new language,” Rosa Pérez explains, “a cross between the language of the professionals, of technicians and scientists, and the language of the community. That’s what made us grow and be able to reach the place that we all are in today.”

It’s the language of the global Restoration Economy.