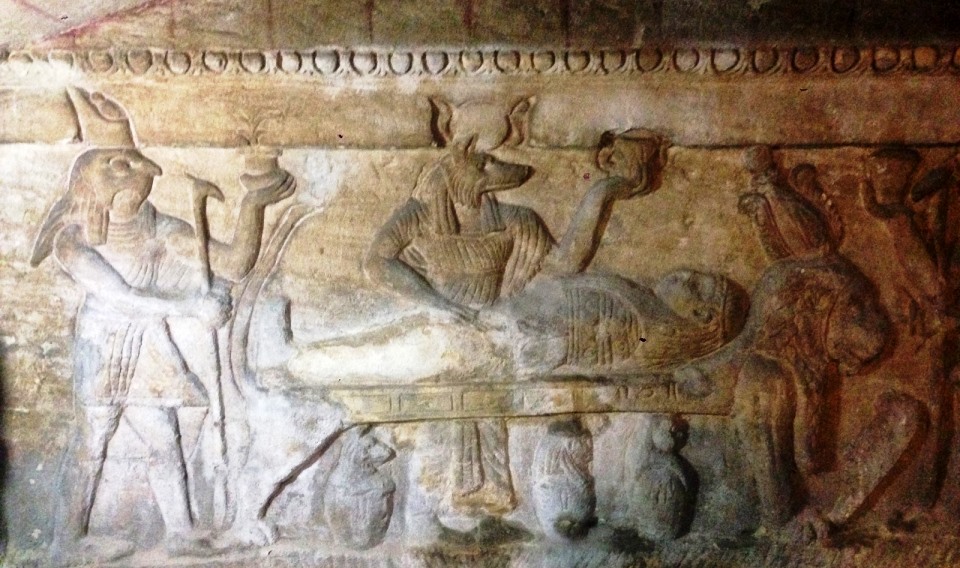 The catacombs of Kom El Shoqafa (meaning “Mound of Shards”) is an archaeological site located in Alexandria, Egypt. It’s considered one of the Seven Wonders of the Middle Ages.

The necropolis consists of a series of Alexandrian tombs, statues and archaeological objects of the Pharaonic funeral cult with Hellenistic and early Imperial Roman influences. 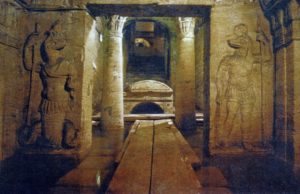 Due to the time period, many of the features of the catacombs of Kom El Shoqafa merge Roman, Greek and Egyptian cultural points; some statues are Egyptian in style, yet bear Roman clothes and hair style while other features share a similar style.

A circular staircase, which was often used to transport deceased bodies down the middle of it, leads down into the tombs that were tunneled into the bedrock during the age of the Antonine emperors (2nd century AD). The facility was then used as a burial chamber from the 2nd century to the 4th century, before being rediscovered in 1900 when a donkey accidentally fell into the access shaft.

Now, on March 3, 2019 Egypt has completed a project to restore the catacombs of Kom el-Shuqafa, which have been prone to groundwater leaks.

The restoration, which began in late 2017, was completed using a $5.7 million grant from the U.S. Agency for International Development (USAID). The grant also covered maintenance and training for ministry employees.

“The antiquity underwent many restoration projects, the most important of which was in the mid-nineties, which was an ambitious project supervised by the Supreme Council of Antiquities,” Antiquities Minister Khaled al-Anani said.

“But unfortunately, the water returned once again and complaints rolled in from parliamentarians, tour guides and archaeologists, which is what pushed us to act in cooperation with USAID.”

The catacombs are unique, mixing ancient Egyptian and Greco-Roman architectural styles. They were carved into the rock on three levels. The ground level was damaged by water from nearby farmland and a canal, as well as sewage water.

The antiquities ministry has previously cooperated with USAID on several groundwater-removal projects in Cairo, Giza, Luxor and Aswan.

Al-Anani said a similar restoration project will launch on March 25, 2019 at Kom Ombo in the Aswan governorate.

Egypt has been working to revive its tourism industry—a key source of foreign currency—which was badly hit after the 2011 popular “Arab Spring” uprising that unseated Hosni Mubarak. The industry was further hampered by a spate of militant attacks that sometimes killed tourists.

Featured photo from Kom el-Shuqafa by So Much More To See.

Part of this article was by Yousef Saba (edited by David Evans), and originally appeared on the Thomson Reuters Foundation website. Reprinted here with permission.