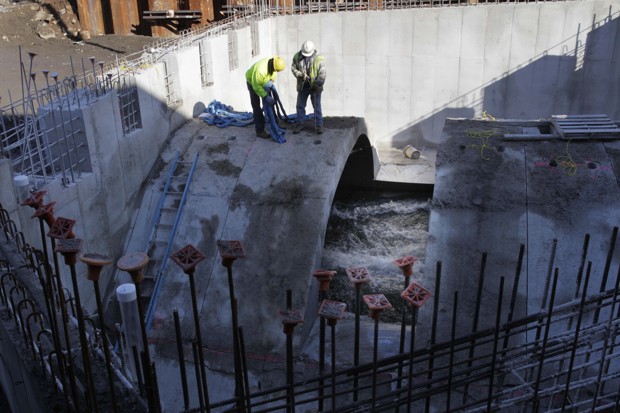 Explore any city enough, and at some point you’re likely to walk on water, so to speak.

San Francisco is full of ghost rivers. So are Washington, DC and Los Angeles. In the urban core of Baltimore, up to 98 percent of streams are underground.

Early city planners may have hoped for healthier cities when they covered up these streams, but it turns out they created new problems. Paving over and piping waterways often worsens flooding. And as new research by scientists at the Environmental Protection Agency indicates, buried streams can also exacerbate pollution.

In a paper published in PLOS ONE, lead authors and EPA research scientists Jake Beaulieu and Heather Golden found that nitrates—nutrients that can become pollutants—travel on average 18 times further in buried urban streams than they do in open streams, before they are taken out of the water column.

One solution may be “daylighting,” or unburying buried streams. Yonkers, Cincinnati, Seattle, and Kalamazoo have all undertaken daylighting projects in the recent past.

In Baltimore, talks of daylighting the Jones Falls river, which drains directly into the city’s Inner Harbor, have been going on for years.

There are considerable economic benefits that accompany unmasked, revitalized rivers; think of developers drooling over Los Angeles’s forthcoming restoration of the L.A. River, a version of daylighting.

But Golden and Beaulieu hope that quantifying the ecological effects of buried streams will motivate more daylighting projects—and, as cities expand, motivate planners to leave free-flowing rivers unburied to begin with.