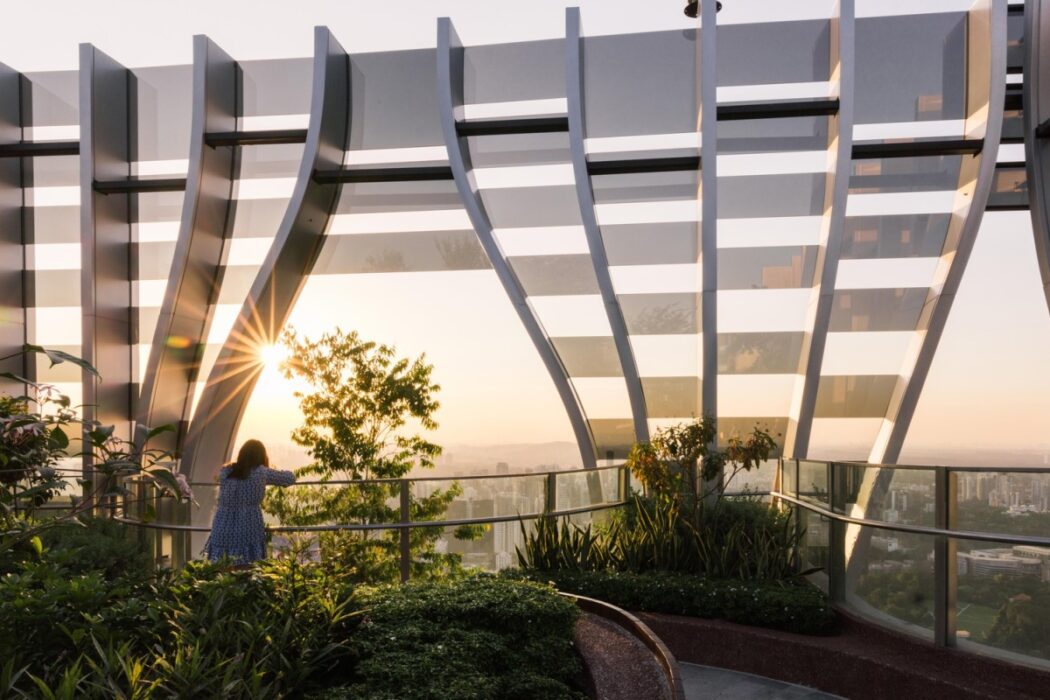 As originally documented in the 2002 book, The Restoration Economy, the global economy made a momentous shift around the turn of the century.

Growing a global civilization from scratch took millennia of economic growth based on sprawl and virgin resource extraction (AKA: new development). That’s natural, but can’t be perpetuated forever on a planet of finite size. The emphasis has now shifted to being primarily (over 50%) based on revitalizing cities and restoring natural resources (AKA: restorative development).

Many cities and countries are behind the curve, while others are far ahead of it. 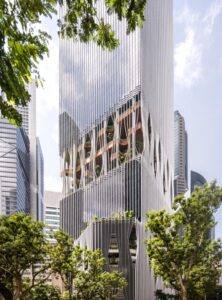 Those at the forefront of the global restoration economy tend to fall into one of two categories: 1) those that have been forced into it by geographic boundaries that don’t allow any more sprawl, and 2) those that are progressive enough to see the wisdom of basing economic growth on making what you already have better (as opposed to basing it on getting more stuff).

The city-state of Singapore embodies both of those dynamics.

The latest evidence is the completion of CapitaSpring, a 280-meter-tall high-rise “oasis” that continues the city’s pioneering practice of green, vertical urbanism.

It transforms the site of a former parking garage into a diverse neighborhood of restaurants, office space, a serviced residence and sky gardens from the ground all the way up to the 51st floor.

This is in keeping with the trends documented in the 2020 book, RECONOMICS: The Path To Resilient Prosperity, which showed that the most successful community revitalization efforts are usually based on repurposing, renewing and reconnecting (AKA: the 3Re Strategy) the existing natural, built and socioeconomic assets.

Of course, repurposing an asset doesn’t always mean keeping an existing structure: it often means repurposing the land it sits on. This is often the case with downtown parking garages, as intelligent cities undo decades of planning mistakes based of designing cities for automobiles, rather than people. 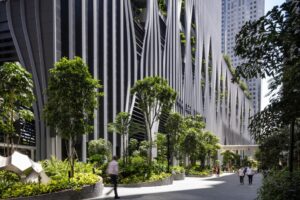 Located at the heart of Singapore’s financial district on the site of a former public car park and a hawker center, the 51-story CapitaSpring is officially completed following four years of construction for CapitaLand Development (CLD), CapitaLand Integrated Commercial Trust and Mitsubishi Estate Co., Ltd.

To date, over 99% of the office and retail space has been committed at the 93,000-square-meter, mixed-use high-rise which is defined by a dynamic interplay of orthogonal lines, lush greenery, and contrasting textures. 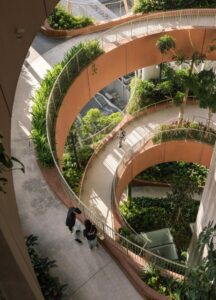 Tan Yew Chin, CEO of CLD (Singapore), said “CLD and our partners are delighted to mark the completion of CapitaSpring, a biophilic skyscraper that represents CapitaLand’s vision to build a greener and sustainable future as laid out in our 2030 Sustainability Master Plan. From Funan in the Civic District to CanningHill Piers along Singapore River, CapitaLand has been playing a key role in injecting holistic work-live-play elements to activate precincts and rejuvenate Singapore’s city center to keep up with evolving lifestyle trends. With CapitaSpring, we are setting a new benchmark for the office of the future by bringing a premium, multi-faceted workplace experience to building occupants, complemented by our core-flex solutions that cater to the increasing adoption of hybrid work strategies.”

At multiple elevations, the vertical elements comprising the building’s exterior are pulled apart to allow glimpses into the green oases blooming from the base, core, and rooftop “sky garden.” 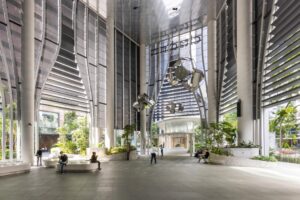 The tower reinforces Singapore’s reputation as a garden city, housing over 80,000 plants, with a Green Plot Ratio of more than 1:1.4 – translating to a total landscaped area of more than 8,300 square meters (90,000 square feet), equivalent to 140% of its site area.

“When we first got invited to join the architectural competition, we saw a great opportunity to team up and join forces with BIG to achieve a uniquely bold result together. It has been enriching to combine our approach with design and innovation with BIG’s skill in architectural scale. As CapitaSpring is open to the public today, I am proud of how we enhanced the public spaces across the building, creating the best experience for all users, leveraging both technology and unprecedented integration with natural elements,” says Carlo Ratti, Founding Partner, CRA-Carlo Ratti Associati and Director, MIT Senseable City Lab. 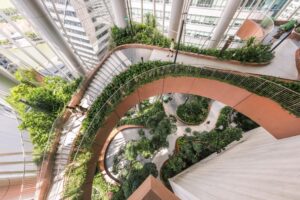 On street level, CapitaSpring restores a portion of the historically significant Market Street to the public realm by pedestrianizing the stretch and creating an expanded landscaped area which creates new green breathing space in the high-density CBD for the neighboring tenants and passersby.

“As someone with Singaporean heritage, I have been honored and humbled by the opportunity to contribute to the ongoing evolution of architecture in Singapore as a distinct blending between the contemporary and the tropical. In our design, this manifests as a seamless transition between the garden and the city, articulated in the facades and a series of lush spiraling gardens connecting between various programs and filled with amenities representing a spectrum of use,” said Brian Yang, Partner in Charge at Bjarke Ingels Group. 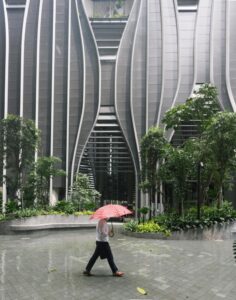 Meandering garden paths create natural entryways into the City Room, an 18-meter-high generous open space at the foot of the tower that creates shelter from the tropical sunlight and showers and welcomes tenants into separate lobbies for the offices and residences, as well as shoppers and diners into the food center within the tower’s podium.

The iconic Market Street Hawker Center is recreated at the building’s second and third floors with 56 food stalls – solidifying the location as the beating heart of the city’s culinary experience, and the role it plays in maintaining local culture and community.

“Our design seeks to continue Singapore’s pioneering vertical urbanism with the 280m tall diverse neighborhood of places to work, live and play inside as well as outside. Due to the unique character of Singapore’s urbanism – both extremely dense and green – we decided to make the design a vertical exploration of tropical urbanism. At grade, the street is closed to form a new linear park and public plaza. A vertical park in the middle of the tower forms a spiraling promenade ascending among tropical tree trunks and canopies. On top, an urban forest feeds all the restaurants and cafes in the building and allows visitors to enjoy the lushness of the summit. Capitaspring is like a vision of a future in which city and countryside, culture and nature can coexist, and urban landscapes can expand unrestricted into the vertical dimension,” said Bjarke Ingels, Founding Partner at BIG. 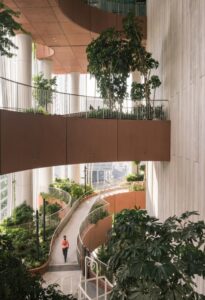 The first eight floors of the tower are dedicated to the serviced residence including a wide range of facilities such as a swimming pool, jacuzzi, jogging track, gymnasium, social kitchen, residents’ lounge, and barbecue pits; the top 29 floors offer premium office spaces with panoramic views of the Singapore River and Marina Bay.

At the core of the building between the hardscapes of the offices and residences are four connected levels of organic softscape dubbed the “Green Oasis” – a 35m open-air garden for work, casual strolls, relaxation, exercise, and events.

The Green Oasis seamlessly weaves nature vertically into the architecture and satisfies the spatial limitations of the locale while granting tenants and residents abundant access to green spaces – animating the elegant smoothness of modern architecture with the ubiquitous tropical nature of the region. 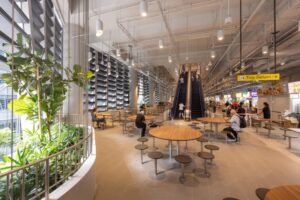 The overall vertical softscape of the Green Oasis mimics the plant hierarchy of tropical rainforests; the hierarchical leaf growth of the plants is in direct proportional relationship to light availability within the vegetation layers.

Shade-tolerant plants with large leaves are found on the “rainforest floor,” requiring the least amount of direct light. Moving towards the canopy layer – the “roof” of the rainforest – trees are defined by their smaller leaf structure.

CapitaSpring’s rooftop garden, with views of the city, is home to Singapore’s tallest urban farm operated by 1-Group. Currently, over 150 species of fruits, vegetables, herbs, and flowers, are grown across five thematic plots to supply the rooftop restaurants with fresh greens. 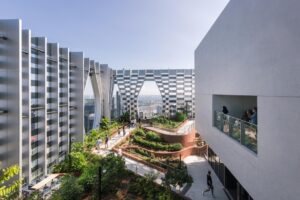 CapitaSpring has been accorded Green Mark Platinum & Universal Design GoldPLUS certifications by the Building and Construction Authority of Singapore.

The building also has amenities in support of the sustainable transport vision in the Singapore Green Plan 2030, including 165 bicycle lots, fully equipped end-of-trip facilities and a 600-meter cycling path around the building’s perimeter along Malacca Street and along Phillip Street, which forms part of the Central Area cycling network connecting to Singapore’s larger cycling network.

All images courtesy of Finnbar Fallon.