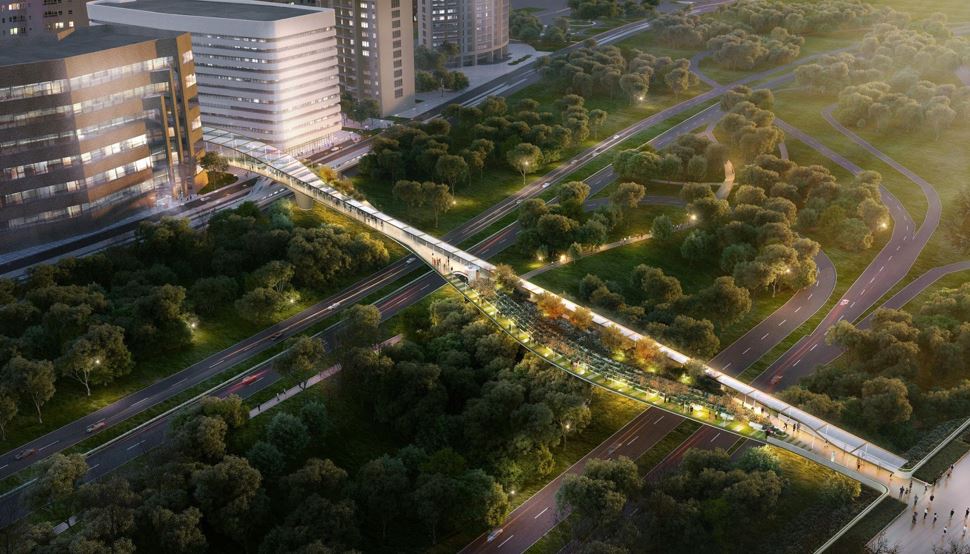 In yet another example of the 3Re Strategy (repurpose, renew, reconnect) at work, the section of Arlington County, Virginia known as Crystal City might soon be repurposing and renewing a plain auto-centric bridge to Washington National Airport into a High Line Park-style park bridge that would be far more pedestrian-centric, thus reconnecting local residents to the airport in a far more functional manner. 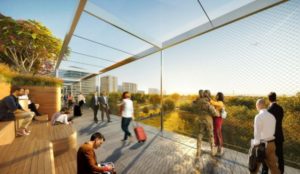 A lofty bridge for people on foot — complete with landscaping, seating areas, and moving walkways — could soon span the gap between a retail-rich segment of Crystal City and the airport. The green focus of the proposed bridge renovation would be a welcome addition to the aesthetically-challenged, concrete-intensive design that has traditionally alienated many from Crystal City.

The bridge itself will be at least a quarter of a mile long — a five-minute walk — so continuing to take the Metro an extra station will still be quicker for riders looking to simply get to and from the airport.

However, those living, staying, and working along Crystal Drive, the main street running through Crystal City, may actually save time by walking to the airport via the new pedestrian bridge instead of taking the Metro.

Back on July 17, 2017, the Crystal City Business Improvement District, in collaboration with area stakeholders, issued a Request for Proposals (RFP) to study the feasibility of a new direct pedestrian connection between Crystal City and Washington National Airport (DCA).

“Crystal City is the area’s most accessible neighborhood – with METRO, VRE, connections to every major area highway, bike paths, and an airport you can literally walk to,” said Angela Fox, Crystal City BID President/CEO. “A new pedestrian connection will bring the airport even closer, from a 15-minute walk to a 4-minute walk and transform the area into a unique multimodal transportation hub serving as a major economic development catalyst for Crystal City, Arlington County and the Commonwealth.”

A new pedestrian connection would combine each of these investments to create an even more wholistic multimodal transportation system and position the neighborhood for future investments in interregional commuter rail, AMTRAK regional and High-Speed Service.

The published RFP sought qualified consultant teams to evaluate and detail the feasibility of a pedestrian connection and will study optimal alignments, real estate considerations (both private and public/federal), regulatory requirements, costs and financing mechanisms, as well as a comprehensive assessment of a pathway to implementation, including the necessary agency and stakeholder approvals that would be required.