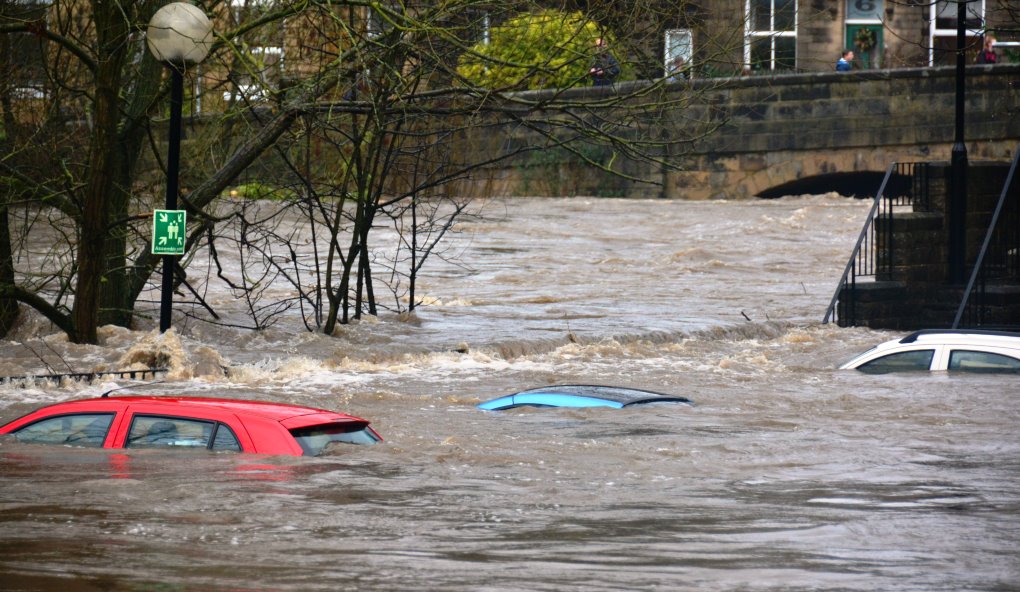 Despite steadily growing climate action by both governments and companies, we continue to fall short of the level of ambition required to curb climate change. In fact, the UN estimates that even if we meet all the climate commitments of the Paris Agreement, temperatures can be expected to rise this century to 3.2°C above pre-industrial levels, far above the 1.5°C threshold to avoid the most severe climate impacts.

While this may not seem like much, it can contribute to the manifestation of immense catastrophes, such as the ongoing wildfire crisis in Australia spurred by heatwaves and flash floods in Indonesia.

We would be wise to prepare for this – and business is no exception.

Attention is often focused on the steps businesses take to mitigate climate change – reducing or preventing emissions of greenhouse gases, or removing carbon from the atmosphere, in order to limit the magnitude of future warming. This remains Plan A in the fight against climate change, and businesses must drive the transition to a low-carbon economy, as seen through initiatives such as Mission Possible. (Note from REVITALIZATION: in our opinion, climate restoration should be Plan A. It’s far too late to rely on mere mitigation.)

But even with a major step up in our levels of ambition to reduce greenhouse gas emissions, it is evident that we cannot avoid all the consequences of climate change. We also need to adapt to rapidly changing climatic conditions, building the resilience of society to prepare for whatever might happen next, so that we can absorb and quickly bounce back from shocks, such as storms and droughts, when they do strike. 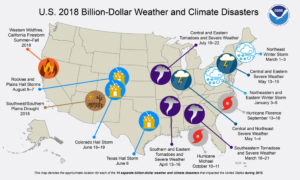 The potential economic costs of inaction are staggering.

Damage done by climate-related disasters and extreme weather in 2018 alone cost the US around $160 billion, and the numbers are only expected to increase as hazards become more complex and unpredictable.

Businesses are also bracing themselves for direct impact to their bottom lines.

In 2018, 215 of the world’s 500 biggest corporations, including giants like Apple, JPMorgan, Chase, Nestle and The 3M Company reported climate-related financial risks of just under $1 trillion.

Risk to infrastructure and supply chains 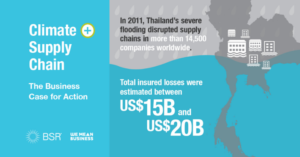 With around 80% of global trade embedded in supply chains, business leaders are increasingly aware of risks that could affect their ability to move through the world, including issues of cost, speed and responsiveness.

In fact, CDP data reveals that 76% of suppliers have identified ways in which climate change could increase the risk of disruptions to their business.

During the severe flooding in Thailand in 2011, more than 14,500 companies dependent on regional suppliers experienced significant damage with total insured losses between $15-$20 billion. Western Digital lost 45% of its shipments, HP lost $2 billion, and NEC cut 10,000 jobs due to a global shortage of hard disk drives.

The first climate-change bankruptcy last year was a historical milestone illustrating how resilience inaction can destroy a business, and cause immeasurable damage to the communities around it.

Following severe drought and devastating wildfires in Northern California last year, one of the largest utilities in the US, Pacific Gas and Electric, filed for bankruptcy, leaving the company with hundreds of filed lawsuits and an anticipated $30 billion in liabilities due to vulnerabilities in its infrastructure.

The fire was one of the nation’s deadliest in modern times. It took the lives of more than 80 people, destroyed more than 18,000 structures, and caused at least $11 billion of damage. The company has been heavily criticized by its consumers, state officials, courts and advocacy organisations for failing to invest in preventative maintenance and other improvements that could have mitigated losses. 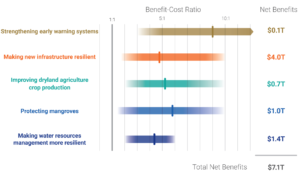 It is not all doom and gloom, however. Done right, efforts to build resilience can yield a triple dividend: not only avoiding economic losses, but also offering positive economic and wider social and environmental benefits. In fact, the Global Commission on Adaptation estimates that investing $1.8 trillion globally in five areas could unlock benefits worth $7.1 trillion from now until 2030.

Climate resilience is an opportunity to create new business products. For example, Goldman Sachs‘ recent report, Making Cities Resilient to Climate Change, describes potential for “one of the largest infrastructure build-outs in history”, while a global survey of finance players highlights a nascent industry investing in natural capital – water, soil, air and living organisms from which we derive a wide range of goods and services – as investors look to build resilience against climate change.

But not only does climate resilience offer businesses new opportunities, it also offers them a chance to do things better. A study of a dairy supply chain in Mexico showed that innovations that improve climate resilience such as heat-resistant building material, drought-resistant seeds, water-harvesting services, low-drip irrigation and new insurance schemes can also generate business opportunities, including new market niches, and new local technologies, products and services – often at a lower price.

The International Council on Mining and Metals also shows that by proactively managing climate risks, mining and metals companies can reduce costs (for example, by reducing water and energy use), while improving relationships with stakeholders.

Finally, the demands on businesses are changing. This year’s Global Risks Report shows that young people are considerably more concerned than older generations about climate and environmental risks. As millennials and Generation X become an increasing influential demographic, businesses who lead on resilience will be well placed to attract customers, investors and talent.

Featured photo of Bingley, UK floods is by Chris Gallagher on Unsplash.