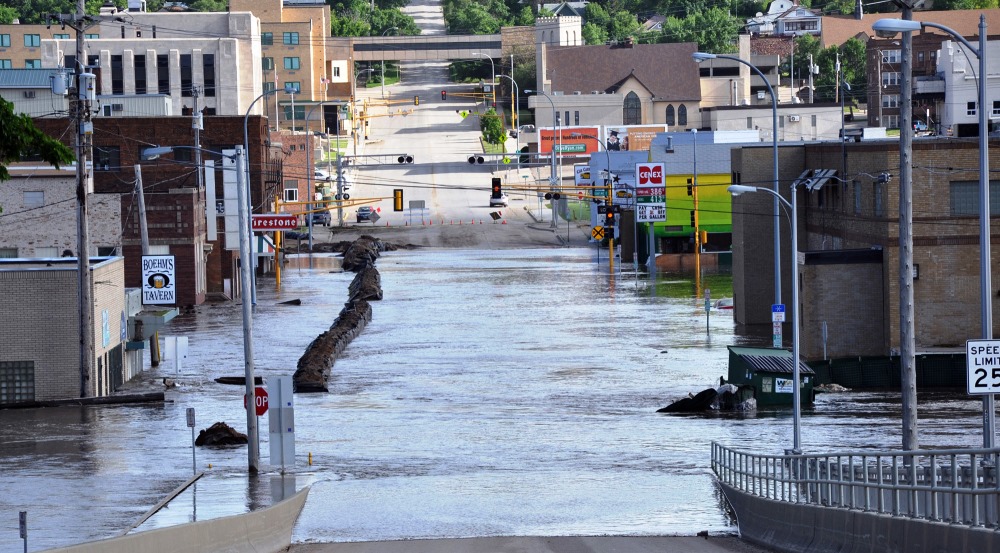 Farms, small towns and large cities throughout the Midwest are suffering under the impact of massive floods. The way we settled the land and our assumptions about flood control are hopelessly out of date. Massive damage has resulted from our development patterns, aging and no longer adequate flood control infrastructure and extreme weather exacerbated by climate change.

While many state and local leaders in the region know they are in trouble and need to respond, they refuse to acknowledge the root cause of their problem.

Reporting on this phenomenon in the New York Times a few weeks ago, Mitch Smith and John Schwartz observed, “Across the Midwest this spring, floods have submerged farms and stores, split open levees and, in some places, left people stranded for days or weeks. The disasters have renewed national attention on how climate change can exacerbate flooding and how cities can prepare for a future with more extreme weather. But in some of the hardest-hit areas, where bolstering flood protection and helping the displaced are popular bipartisan causes, there is little appetite for bringing climate change — and the political baggage it carries — into the discussion.”

People understand that we are in unprecedented times but are more interested in adapting to climate change than discussing or mitigating it. The problem is that without acknowledging climate change, one will find it difficult to make the projections required to successfully adapt to it. And without mitigation we will at some point reach a point where adaptation is impossible. There is some evidence that the relentless pounding that the Midwest is enduring has resulted in greater receptivity to the findings of climate science.

According to a recent piece in the Economist, “Older polling, by Pew, had suggested that coast-dwellers were more alarmed by climate change than those living 300 miles or more inland. But inlanders’ views seem to be shifting, too. A survey published this year by the Energy Policy Institute, part of the University of Chicago, found that 70% of Americans believe climate change is real. Nearly half are also more persuaded by warnings from climate scientists than they were five years earlier. Many said that witnessing extreme weather events—like the tornadoes, storms and floods battering the Midwest —did most to form their views.”

Even if greenhouse gas pollution ended tomorrow, the current accumulation of these pollutants would guarantee that global warming would continue. Reducing the pace of climate change would help ensure that extreme weather does not become even more extreme, but floods, droughts, fires and other climate impacts would continue. We developed communities and built infrastructure and farms assuming a relatively stable climate system would continue. We invested trillions of dollars in transport, energy, production, food and all of the requirements of modern life.

Investing in infrastructure is a central function of government even if the incompetents running America’s national government seem to have forgotten this. But we have been engineering our environment and building infrastructure for centuries. We’ve pumped water to deserts, straightened rivers, rebuilt eroded beaches, created lakes, built electrical generation and transmission lines and intervened in thousands of ways to shape the earth for human needs.

Climate change will require that we rebuild our flood control systems in new and creative ways. We will need more research on climate impacts to do this successfully and we will need to moderate the rate of those impacts to ensure that what we build doesn’t quickly become outdated. We will also have to build a 21st century flood control system that does a better job of factoring in environmental impacts than the 20th century system did. Engineers love to pour concrete, but the new system should make better use of ecosystem services and rely as much on ecological and climate science as engineering.

And government will need to figure out a way to finance all of this. I’m certain a public-private partnership can be built due to the financial benefits of avoiding floods and maintaining a productive society. However, a huge amount of public capital will be needed and that will require taxes. In an anti-government and anti-tax era, we once again find we need government to spend money and authoritatively act to rebuild something- this time it’s America’s flood control system.

I am confident that with the political will present and the funding made available, we can save American agriculture — for the moment. But if we don’t couple this effort at climate adaptation with a major push to decarbonize the world’s economy, we are simply rearranging the deck chairs on the Titanic. The resistance to climate science by the Trump administration and some of his ideological supporters must give way to a deeper understanding of the reality of climate change and the centrality of climate science.

We could pretend that the move to renewable energy is simply a way to modernize the energy system and make it more cost effective. This is an argument made by Justin Gillis in a recent op-ed piece in the New York Times.

According to Gillis, “The clean-energy picture has evolved so rapidly in the past few years that I think the situation calls for a strategic shift on the part of the Democrats. Wagging fingers in the Republicans’ faces about their climate denial has not worked. Demanding that they pass punitive fuel taxes has not worked. What seems to be working is to emphasize the local and statewide benefits of clean energy… As the economic case for renewables grows more compelling, the issue becomes how much faster we can go in cleaning up the grid. The tactical goal for Democrats is not to get Republicans to admit they have been wrong about climate science; the only thing that matters is to pass measures to speed the energy transition… The polls have told us, over and over, that right below the surface in this country lurks a powerful consensus to go all out on the energy transition. The falling costs offer a fresh opportunity to talk about competition and freedom of choice in the market for electricity, a language that many Republicans understand.”

I have long agreed the politics of climate must emphasize lowering the price of renewable energy rather than raising the price of fossil fuels. It appears that technological improvements have brought that within reach. But the transition to renewable energy, while critical, is not “the only thing that matters”. It also matters that we increase the scientific literacy of policy debates in our increasingly complex and technological world. “Wagging fingers” at opponents is arrogant and I agree, self-defeating, but ignoring science and giving people a pass when they talk about scientific “beliefs” instead of scientific “facts” is dangerous.

We have a president who lies so often it makes me sometimes question my own sense of reality. In late April, Glenn Kessler, the Washington Post fact checker reported that President Trump passed the milestone of 10,000 lies since he was sworn into office. It is easy to see why we have become so afraid of speaking truth to power. But we must reassert the importance of facts. Reality has a way of challenging lies or at least rendering them irrelevant. Farmers in America are facing unprecedented challenges, from tariffs to floods. That’s a fact.

The floods in America’s Midwest requires a massive effort to redesign and rebuild our flood control system. This redesign must be based on the best science and engineering we have. Including climate science, for reasons that I hope are obvious.

This article by Steve Cohen originally appeared on the blogsite of the Earth Institute at Columbia University. Reprinted here (with minor edits) by permission.