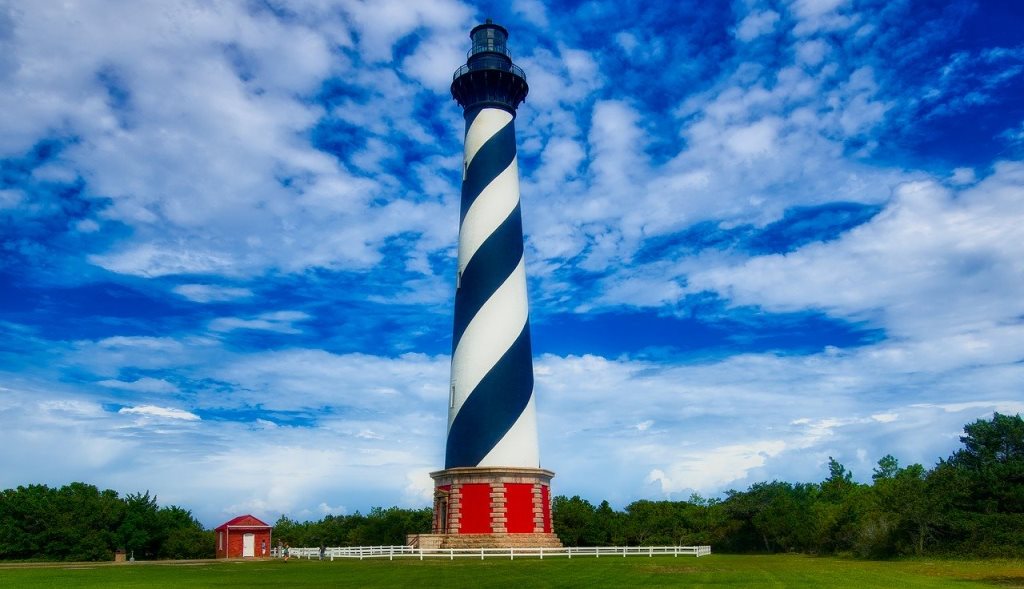 In North Carolina, the Cape Hatteras Lighthouse protects one of the most hazardous sections of the Atlantic Coast. Offshore of Cape Hatteras, the Gulf Stream collides with the Virginia Drift, a branch of the Labrador Current from Canada.

This current forces southbound ships into a dangerous twelve-mile long sandbar called Diamond Shoals. Hundreds and possibly thousands of shipwrecks in this area have given it the reputation as the “Graveyard of the Atlantic”. 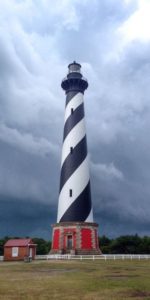 Now, plans are underway to launch a major repair and restoration project. “We’re anticipating that the Cape Hatteras Lighthouse repair work will begin in the summer of 2021, based on our current schedule,” said Mark Dowdle, Deputy Superintendent of the National Park Service Outer Banks Group. “It’s a broad project, and we’re still developing plans and [evaluating] the scope of what we need to do.”

Construction of a lighthouse at Cape Hatteras was first authorized in 1794 when Congress recognized the danger posed to Atlantic shipping. However, construction did not begin until 1799. The first lighthouse was lit in October of 1803. Made of sandstone, it was 90 feet tall with a lamp powered by whale oil.

The 1803 lighthouse was unable to effectively warn ships of the dangerous Diamond Shoals because it was too short, the unpainted sandstone blended in with the background, and the signal was not strong enough to reach mariners. Additionally, the tower was poorly constructed and maintained. Frequent complaints were made regarding the lighthouse.

In 1853, following studies made by the Lighthouse Board, it was decided to add 60 feet to the height of the lighthouse, thereby, making the tower 150 feet tall. The newly extended tower was then painted red on top of white making the lighthouse more recognizable during the day. At the same time, the tower was retrofitted with a first order Fresnel lens, which used refraction as well as reflection to channel the light, resulting in a stronger beam.

By the 1860s, with the need for extensive repairs, Congress decided to appropriate funds for a new lighthouse. The Lighthouse Board prepared plans and specifications and construction on the new lighthouse began in October of 1868. 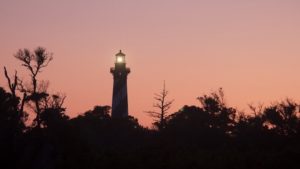 Since the lighthouse was built before the present-day pile driver was perfected, an interesting problem immediately arose. The ground water levels on the Outer Banks are quite high and, therefore, when they began digging out the pit for the lighthouse foundation, it filled with water about 4 feet down. Working with the natural conditions, the foreman, Dexter Stetson, used a “floating foundation” for the Cape Hatteras Lighthouse. This meant that layered 6 foot x 12 foot yellow pine timbers were laid crossways in the foundation pit below the water table. Granite plinths (rock layers) were placed on to the top of the timbers.

The new lighthouse was lit on December 16, 1870. The 1803 lighthouse was demolished in February of 1871. The Cape Hatteras Lighthouse received the famous black and white stripe daymark pattern in 1873. The Lighthouse Board assigned each lighthouse a distinctive paint pattern (daymark) and light sequence (nightmark) to allow mariners to recognize it from all others during the day and night as they sailed along the coast.

The lighthouse is a conical brick structure rising from an octagon-shaped brick and granite base and topped with an iron and glass lantern. It is the tallest brick lighthouse in the United States and measures 198.49 feet from the bottom of the foundation to the top of the pinnacle of the tower. This height was needed to extend the range of the light-beam from the tower’s low-lying beach site. The tower’s sturdy construction includes exterior and interior brick walls with interstitial walls resembling the spokes of a wheel. There are 269 steps from the ground to the lens room of the lighthouse.

The Fresnel lens installed in the 1870 lighthouse was powered by kerosene and could be seen approximately 16 miles from the shore. The keeper had to manually rewind the clockwork apparatus each day. The Fresnel lens usually took 12 hours for a complete cycle. When the lamp was electrified in 1934, the manual mechanism was no longer needed. Damaged by vandals, the giant glass Fresnel lens had to be replaced by a modern aero beacon in 1950. Today, electricity provides the rotating power and a photocell turns the light on and off. 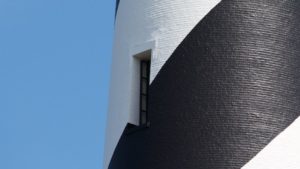 Due to threatening beach erosion, the Bureau of Lighthouses decommissioned the Cape Hatteras Lighthouse in 1935. The beacon was then moved to a skeletal steel tower until 1950. On November 9, 1937, the Cape Hatteras Light Station was transferred to the National Park Service. While the park was not operational at this time, the lighthouse and the keepers’ quarters became part of the nation’s first National Seashore.

In 1999, after years of study and debate, the Cape Hatteras Light Station was moved to its present location. The lighthouse was moved 2,900 feet in 23 days and now lies 1,500 feet from the seashore, its original distance from the sea. The Double Keepers’ Quarters, the Principal Keeper’s Quarters, the dwelling cisterns, and the oil house were all relocated with the lighthouse.

The National Park Service currently maintains the lighthouse and the keepers’ quarters. The U.S. Coast Guard operates and maintains the automated light.

Featured photo is by 1778011 from Pixabay. All other photos are courtesy of the National Park Service.