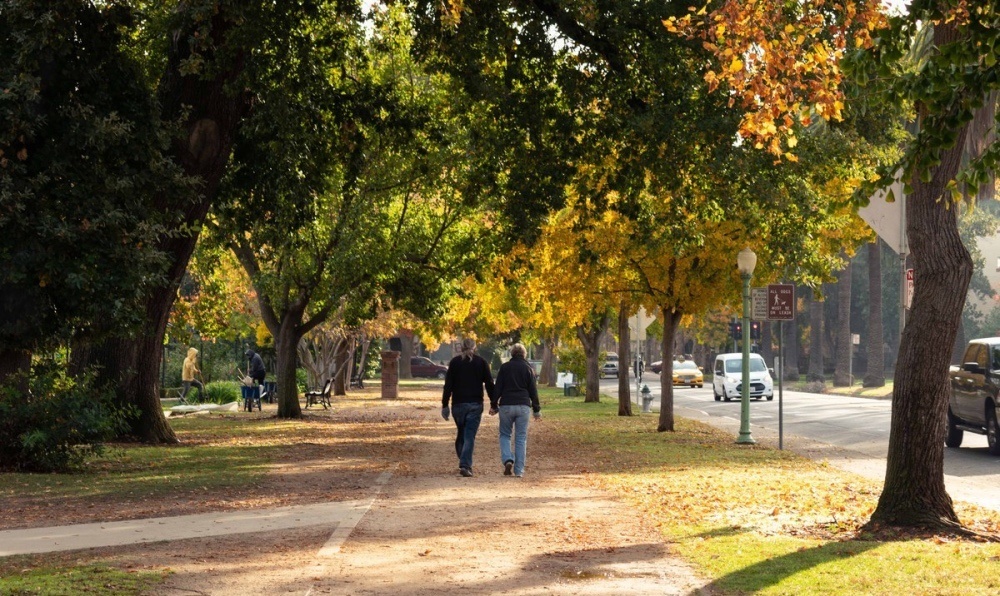 So, should city officials treat them as core infrastructure — as a utility themselves?

In the face of a warming planet and breakneck urbanization, a growing number of U.S. policymakers and citizens are asking that question.

“We’re having a moment in our field right now, a sudden awakening,” said Ian Leahy, vice president of urban forestry at American Forests, a non-profit.

Last week, Republican lawmakers proposed legislation setting a goal for the United States to plant a trillion trees by 2050 to fight global warming.

U.S. cities alone could plant about 400,000 of those trees, noted the World Resources Institute, a Washington, DC-based think tank. And the benefits would go well beyond carbon storage.

According to the National Tree Benefit Calculator, which uses data from the U.S. Forest Service, a single 36-inch diameter (91-cm) willow oak in a residential area in the D.C. suburbs can provide nearly $330 in benefits per year.

Citing similar benefits, the United Nations food agency in September announced plans to plant up to 500,000 hectares of urban forests in 90 cities across Africa and Asia by 2030.

But even as recognition of the importance of urban forests is growing, mature city trees are dying across the United States and not being replaced, Leahy said.

That translates into at least $96 million in lost benefits annually, the study noted. “The on-the-ground situation is still not good,” Leahy told the Thomson Reuters Foundation. 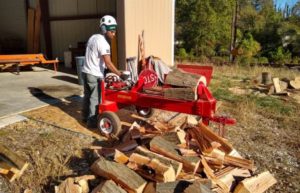 A Camp Small worker splits firewood to sell to city residents and businesses in Baltimore, Maryland, in 2019. Photo by Shaun Preston.

Research shows urban trees have significant positive effects on both cities and their residents.

They capture more than a third of rainfall, according to the U.S. Environmental Protection Agency (EPA), easing the strain on flooding and stormwater infrastructure.

Their shade helps lower energy use by nearly half, according to the EPA, while reducing carbon emissions by up to 5%.

Researchers have also found that trees dampen urban noise by up to 10 decibels, boost student memory skills, bring down the risk of psychiatric disorders, and even reduce crime.

Yet there often remains a gap between rhetoric and reality on the issue of urban trees, researchers and activists warn. An example is the leafy DC suburb of Arlington, Virginia (where REVITALIZATION is based), which activists worry is becoming less leafy by the day. (They’re right: the current Arlington County Council is disastrous! – Storm)

Kit Norland of the citizen-run Arlington Tree Action Group said official figures show impervious surface area – covered in materials such as concrete and brick – has been expanding in the city by about nine acres (four hectares) per year.

“Trees are an afterthought,” she said. But the county does all it can, said spokeswoman Susan Kalish. “Arlington values its trees and acts as their steward,” she said in emailed comments.

The county’s goal is “to plant as many trees on public property as possible based on land use and condition,” she added. “Whenever possible we replace a lost tree on public land with another tree.” 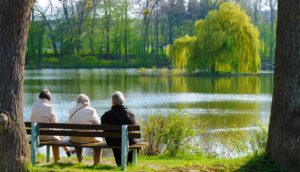 Funding for city trees has been declining steadily in the United States over the past few decades, said Mark McPherson, executive director of City Forest Credits, a Seattle-based non-profit.

A guide published last year supported by the USDA said a city can spend up to $65 for every tree it plants, in addition to significant ongoing maintenance costs.

Over the past four years, City Forest Credits has been pioneering a new way for cities to fund those costs, by tapping the private sector.

“To do that, you have to give (companies) something they want, and one of the things they want is carbon credits,” McPherson said.

Carbon markets allow governments, companies and other entities to earn and sell or trade credits for tons of avoided, reduced or stored climate-changing emissions.

The goal of City Forest Credits is to “bring urban forestry into that carbon equation,” McPherson said, noting that most tree-planting initiatives focus on larger areas, often in tropical regions.

City Forest Credits looks at planting or preservation projects set up by non-profits and others, and determines the number of credits the projects are worth, taking into account carbon but also the myriad other benefits of urban trees.

In turn, companies, governments and other groups can buy these credits to offset their own emissions, for instance in pursuit of carbon-neutral pledges.

Cities and companies have been paying attention. Projects accredited by City Forest Credits have helped preserve forestland outside Seattle and other cities, restored rivers and streams in Austin, Texas, and revived shoreland in Washington state, McPherson said. 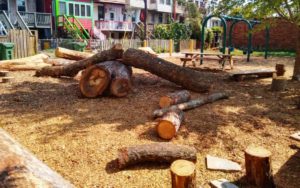 A play space in Baltimore, Maryland, uses logs and lumber from the city’s Camp Small project, seen in 2019. Photo by Shaun Preston.

In Baltimore, Maryland, a city operation aims to simultaneously pay for urban forest maintenance, reduce its climate footprint and give urban trees a second life once they come down.

For the past century, a five-acre (two-hectare) site in the middle of the city has been a dumping ground for trees from city and park land, explained Shaun M. Preston, yardmaster at the site known as Camp Small.

Whenever the site reached capacity, a company would come in to grind through the material and haul it away.

In 2016, the city started up a program “recognizing that there was higher value to the material coming in here,” Preston said.

Camp Small got new equipment to create mulch and compost as well as high-quality lumber, all of which has so far been used in the city’s parks.

By selling logs to mills and producing lumber, the site has been able to recycle 100,000 board feet (236 cubic meters) of material into lumber annually, Preston said.

The project is looking to double its lumber production, he added, to make about $120,000 worth of lumber per year that can be sold to residents and private businesses – revenue that will go to increasing the city’s tree cover.

“Our goal of increasing canopy struggles with costs, so this will help,” he said.

Trees are also helping pay for themselves in Sacramento, California.

The city – known as the City of Trees – has one of the densest urban canopies on earth, according to the Treepedia project from the Massachusetts Institute of Technology‘s Senseable City Lab.

“We have people remark when they visit — the first thing they notice is the trees, and … the awe they (feel) seeing these towering giants,” said Stephanie Robinson, spokeswoman for the non-profit Sacramento Tree Foundation.

For 30 years now, those giants have also been used as core infrastructure by the local electrical utility, in an effort to cool the city and reduce energy consumption.

Sacramento Shade, a partnership between the foundation and the Sacramento Municipal Utility District, has distributed and planted 600,000 trees since 1990, Robinson said.

The temperature under the city’s canopy can be 20 degrees Fahrenheit (11 degrees Celsius) cooler than areas with no shade, she noted, reducing the need for energy-guzzling air conditioning.

Los Angeles unveiled a similar program in October, while legislation introduced in the U.S. House of Representatives last month would create a national initiative to encourage power companies to plant more trees in residential areas.

Still, even in the City of Trees the question of whether we need urban forests remains complicated. “People value trees, but they’re taken for granted, and it’s hard to convince people that they’re worth it,” Robinson said.

Featured photo of people walking beneath trees in Sacramento, California (October 2019) is courtesy of Stephanie Robinson.

This article by Carey L. Biron was edited by Jumana Farouky and Zoe Tabary. It originally appeared on the website of the Thomson Reuters Foundation, the charitable arm of Thomson Reuters. Reprinted here (with minor edits) by permission.