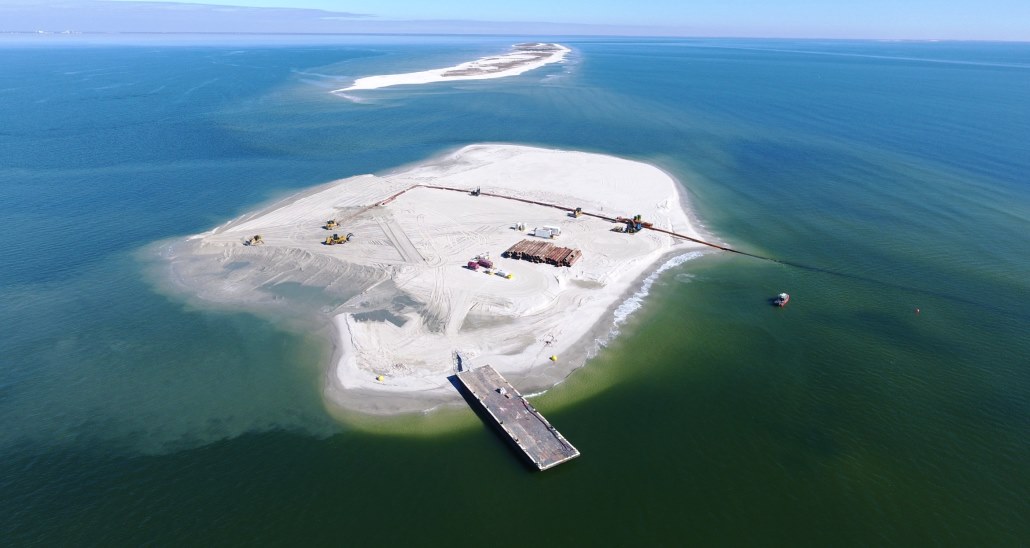 In my (Storm Cunningham) first book, The Restoration Economy, I predicted that many companies that had long been involved in activities normally considered environmentally destructive (such as dredging rivers for ship channels) would find new growth opportunities applying the skills and equipment to the fast-growing field of restorative development. 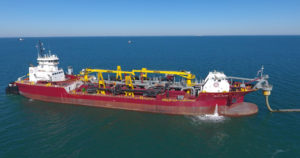 A GLDD dredging ship actively replenishing Ellis Island, off the coast of Mississippi.

In some cases, they would actually be getting paid to undo the damage their industry—sometimes even their company—inflicted on the environment decades ago, during less-enlightened times.

Great Lakes owns and operates the largest fleet in the U.S. dredging industry, comprising over 200 specialized vessels, and has significant international operations.

Great Lakes will be working on the Ship Island Phases 3 and 4 of the MSCIP Barrier Island Restoration Plan, which is a continuation of, and final phases for, the restoration of Ship Island in the Gulf Islands National Seashore barrier island chain.

This project supplements the initial closure of the Camille Cut breach that restored Ship Island back to a single contiguous barrier island and was performed by Great Lakes’ ATB hopper dredge Ellis Island in 2018. This project is expected to commence in 2019 with completion by October 2020.

The Post-Florence Renourishment Project is the second phase of beach nourishments that replace sand lost in the hurricane. Work performed will enhance the shorelines at Emerald Isle, Pine Knoll Shores and Atlantic Beach. Great Lakes completed phase one in April 2019. This project will commence January 2020 with completion by April 2020.

Note: The Kings Bay Entrance Channel project isn’t restoration: it’s just maintenance dredging of the entrance channel and parts of the inner channel to the Kings Bay Submarine Naval Base and the port of Fernandina. In addition, the project includes a beneficial use component placing dredged sand on the beach near Fort Clinch State Park and the northern portion of Fernandina Beach in Nassau County. Work is expected to commence in December 2019 with completion by the end of March 2020.