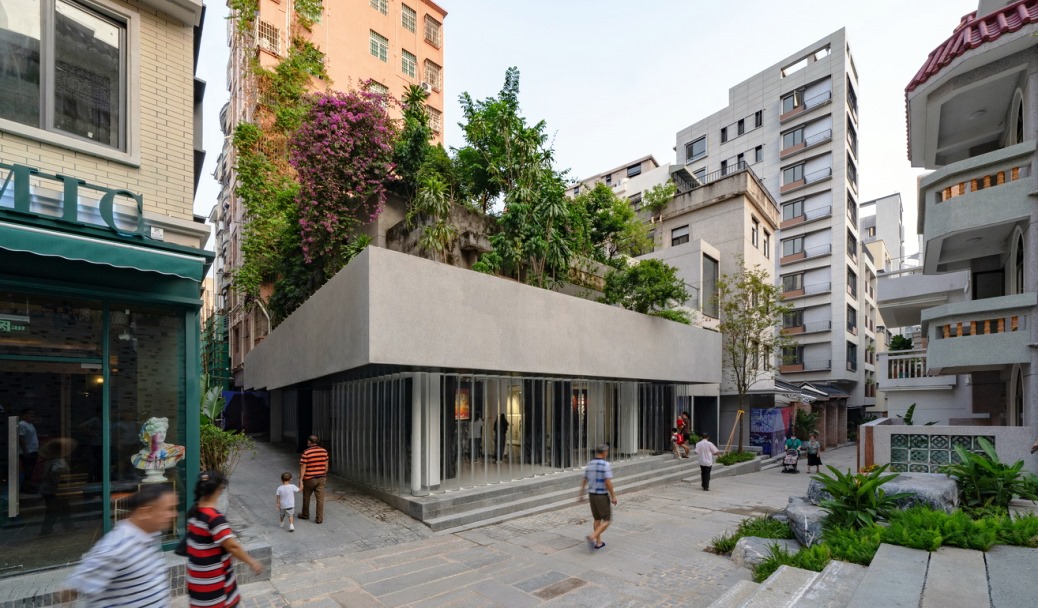 In China, the Plant Building of Nantou Old Town was built in 1980s, locates in the middle of Zhongshan South Street, eastside of the pocket garden.

The first floor of the building served as stores, and the second floor and above were used as residential space. The building was known as one of the most typical residential buildings in the old town. 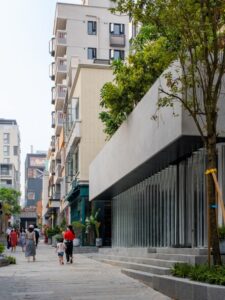 It has the masonry-concrete structure and water-washed sandstone façade, which is very common in the urban village buildings.

However, with the rich plants on the terrace raised by its owner, the building also shows a unique character of “a green box inside ten thousands of buildings”.

Following the 2017 UABB, a new “mega renovation” has been carried out to revitalize Nantou Old Town, led by the Bureau of Public Works of Shenzhen Municipality Nanshan District, along with private developer Shenzhen Vanke Development Ltd.

In this renovation, one of the commissions accepted by the architects at CM Design from the Urban Research Institute of China Vanke, was to establish a new image for the plant building.

Here’s what the CM Design architects say about their project: 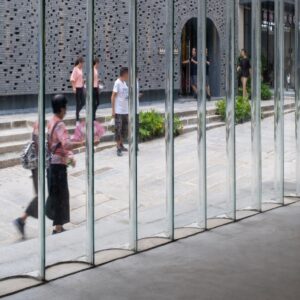 As the renovation progressed, the street overlapped a series of completely different building facades and spaces.

In this context, CM seeks to give a new open and clear feature to the plant building, reconstructing the mutual infiltration of indoor and outdoor spaces and the interaction with the street.

Instead of displaying traditional flat image of street stores, 350mm diameter curved glass continuously wrapped the first floor to form an interface of transparency and interactivity, creating a dramatic difference from the surroundings, and reconnecting the interior space with the old town. 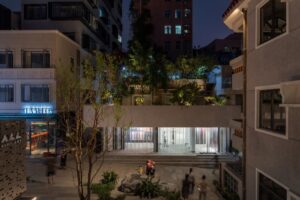 For buildings on the second floor and above, what we think the most meaningful in the renovation is not just about retaining——living space and owner’s lifestyle have not been changed, their love for plants could also be sustained——but a design that similar to “not design” can strengthen the character of a green box on the roof, contributing the only rising forest to the high-density urban village, and making it exceedingly precious.

The green plants on the second and third floor contrast the transparent pure curved glass on the first floor.

Thick cornice with water-washed sandstone overhanging the street separates the two layers of open public space along the street and private living space above, strengthening the entrance and the architectural interface as well as providing sun and rain protection. 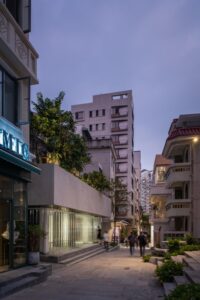 The renovation of Nantou Old Town depicts the rich and diversified urban life and cultural connotation in various stages of Shenzhen’s history, showing the development context of the historical old town and contemporary city.

The Plant Building has found its own identity and memory in the homogeneous architecture and city types. It is a juxtaposition of the building and garden, a collage of architectural spaces of different ages, and a dialogue about new and old materials as well as construction methods.

In the future, the first floor will be placed in the street as a cultural and art exhibition space, while the second floor shows a symbiotic picture of urban life hidden in the city and the garden. The scenery of diversification just reflects the inclusiveness and sharing of the renovation of the old town.

All images courtesy of CM Design.