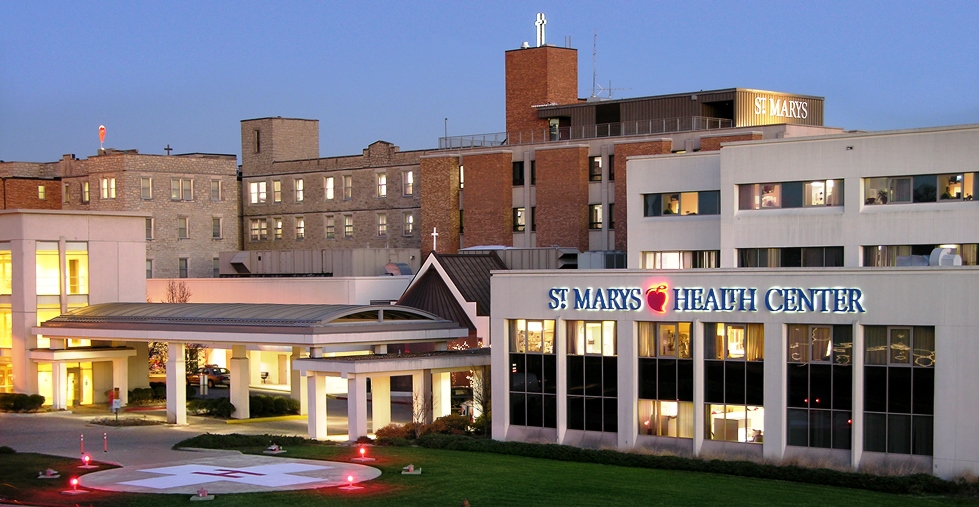 ​​At​ the turn of the twentieth century, Jefferson City, Missouri was a thriving river town, both politically and culturally. For all the modern conveniences of a state capital, however, mid-Missourians seeking extended medical care traveled by river or trails to St. Louis or Kansas City.

Recognizing this need for a hospital, Reverend Otto J. Hoog, pastor of St. Peter’s Church, contacted the Archbishop of St. Louis, Most Reverend John J. Kain, who reques​ted that the Sisters of St. Mary to undertake the project. ​The Sisters of St. Mary had a legacy of providing for the poor and the sick, and Reverend Mother Mary Seraphia Schloctermeyer graciously agreed. 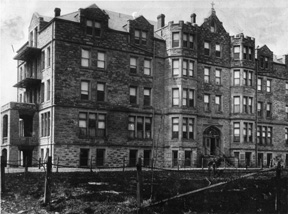 In late 1902, the planning Jefferson City’s first hospital began. The cornerstone of the new $60,000 St. Marys Hospital was laid in May of 1904. On October 1905, Jefferson City’s three-story hospital was dedicated, and Jefferson City boasted a modern facility with 38 patient rooms, a pharmacy, operating rooms, x-ray, and consultation rooms.

After over a century of service to the community, a larger, more modern facility was needed. A $200 million new facility was finished about four miles southeast from the original site in 2014. It was announced in n December of 2015 that St. Mary’s Hospital had sold their original property to the Farmer Holding Company, which is based in Jefferson City.

Farmer Holding Company plans to bring new life to the historic-but-dead site by redeveloping it into a retail, office, and shopping center. The 11.3-acre campus includes the original hospital building, an office building, and parking structures with 804 spaces. The cross on top of the old hospital was removed on December 16 and donated to St. Peter Catholic Church.

“Our primary focus was to ensure the hospital campus was transferred to a developer that shared our passion and vision to create a first-class redevelopment of the property,” said Brent VanConia, president of SSM Health St. Mary’s Hospital – Jefferson City. “As a result, I am extremely pleased we were able to sell the property to Farmer Holding Company, a locally owned company with a strong quality reputation. The Farmer family is committed to the Jefferson City community and I am confident they will successfully redevelop this site.” 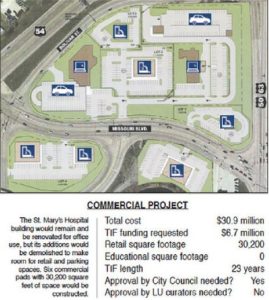 According to Rob Kingsbury of Farmer Holding Company (FHC), the plan is to do everything they can to renovate and make use of the existing structure. “We appreciate the interest, support and partnership of the Jefferson City community, elected leaders, and the team at SSM Health,” Kingsbury said. “We are grateful for the opportunity to purchase the property and look forward to doing our best to maximize its potential.”

To qualify for TIF funding, projects must be in a blighted area or in an economic development area that has not been subject to growth through private investment and would not be expected to do so. The staff report and but-for report said the St. Mary’s proposal meets requirements to fall under a blighted area.

But a May 11, 2017 city report found the rate of return on investment would be too small to spur private redevelopment of the site without taxpayer assistance. A separate staff report to the Tax Increment Financing (TIF) Commission the same day recommended approval of FHC’s plans to use between $6.7 million and $7.3 million in public funding funding to partially offset the cost of redeveloping the site.

FHC began soliciting bids to remove asbestos from all the buildings on the site, and it’s believed some are covered in asbestos, which complicates environmental concerns. Maxwell said 8.65 percent is a reasonable return on investment. “It is an unbelievably challenging project,” Maxwell said. “There are very few developers that would accept an 8.65 percent return to do a project this difficult in this type of area.”