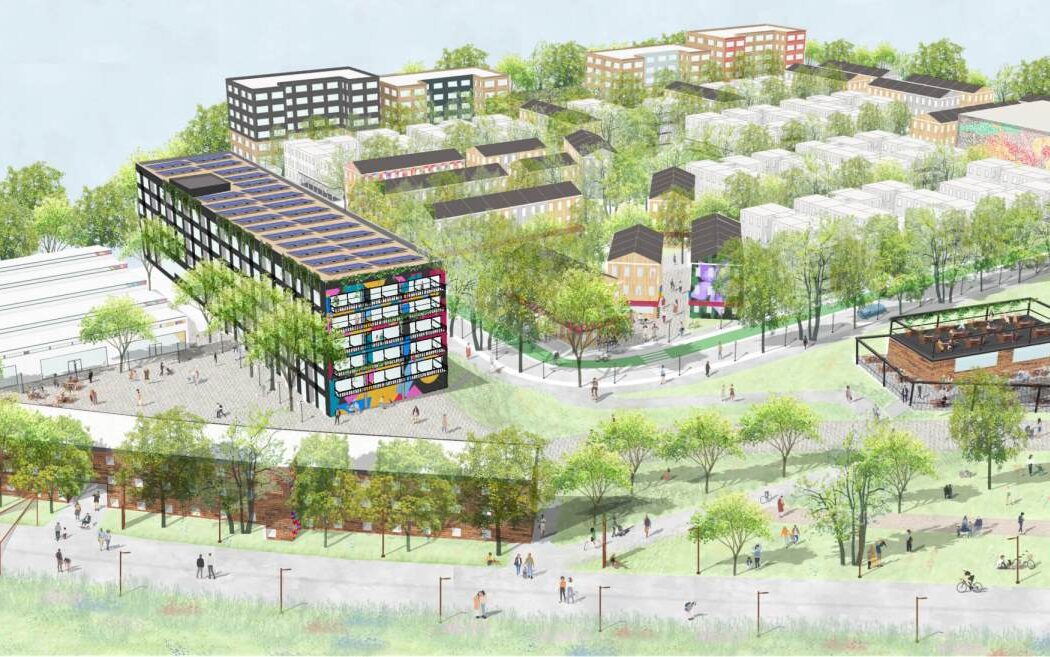 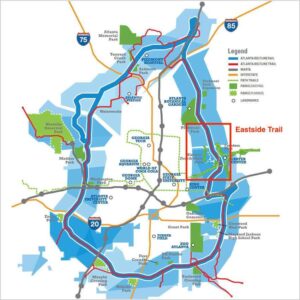 The Beltline is also the largest example of the reliable 3Re Strategy at work. This well-proven, near-universal approach to revitalization places is based on the simple concept of basing economic growth on repurposing, renewing and reconnecting existing natural, built and socioeconomic assets. It was forst documented in the 2020 book, RECONOMICS: The Path To Resilient Prosperity.

Now, on September 22, 2022, the Beltline took a major step towards adding a shiny new 20-acre “pearl” to the necklace when Atlanta BeltLine, Inc. (ABI) the has officially selected the finalist in its Request for Proposals (RFP) process for the much-anticipated redevelopment of the 20-acre Murphy Crossing site, located at 1050 Murphy Avenue in southwest Atlanta, Georgia.

The finalist is real estate development company Culdesac, Inc., which will partner with Urban Oasis Development, Kronberg Urbanists + Architects, LDG Consulting and T. Dallas Smith and Co. to realize the new mixed-used redevelopment at Murphy Crossing, which sits within the Oakland City neighborhood and is bordered by the neighborhoods of Adair Park and Capitol View. 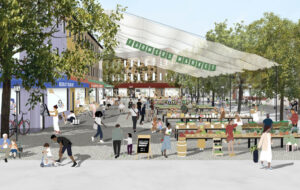 “The revitalization of Murphy Crossing has long been a part of the vision of Atlanta BeltLine and represents many of the aspirations we have for sustainable, equitable redevelopment along our 22-mile corridor,” said Clyde Higgs, president and CEO of Atlanta BeltLine, Inc.

“We believe the Culdesac team, which includes members of one of the very neighborhoods this project will impact, will be great stewards of the community’s desires and great partners to our Atlanta BeltLine team,” he added.

The plan has prioritized high density, transit-oriented development focused on preserving land for pedestrians and bicyclists in outdoor spaces protected from cars.

The open layout will also include residential and commercial affordability in a mix of new and existing buildings to create connectivity with the surrounding neighborhood. Additional components will include a grocery store, retail and dining options, co-working spaces, arts and culture programming and a farmers’ market – in tribute to the land’s historic fabric and character.

The investment at Murphy Crossing is part of an estimated $800 million of private investment underway within a mile of the site, including projects newly-constructed, in progress or in the pipeline. The site sits at the heart of the existing and expanding commercial nodes of Pittsburgh Yards®, the MET, Lee + White, and West End Mall.

“Culdesac, Inc. designs welcoming and locally connected neighborhoods that offer a walkable lifestyle. We build mixed-use developments that embrace community, open space, and mobility, and we’re excited to have the opportunity to bring our next neighborhood to Murphy Crossing,” said Jeff Berens, Culdesac Co-Founder and COO. “We look forward to working with our partners in the development of a project that reflects the BeltLine’s commitment to tie the people of Atlanta together and create a more livable and geographically integrated city.” 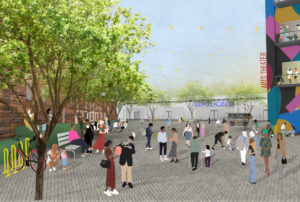 The proposed development, to be known as Murphy Crossing by Culdesac, will support the BeltLine in its efforts to further its equity, affordability and inclusion goals through intentional development, employment and housing options, and transit connectivity.

The site is adjacent to the BeltLine’s Westside Trail and in close proximity to the Oakland City and West End MARTA stations, providing a critical conduit for connectivity and development within southwest Atlanta.

One of the key components of the project is its contribution to ABI’s affordable housing goal. Twenty-five percent (25%) of the residential units will be designated permanently affordable with an additional five percent (5%) deemed affordable for at least the next 30 years. The target AMI is between 60 and 80 percent.

Additionally, Culdesac intends to offer 30% of all retail and light industrial spaces at an affordable rate to small businesses in the area.

The site, once home to the Georgia State Farmers Market, was first included in ABI’s foundational Atlanta BeltLine Redevelopment Plan in 2005 as one of its key redevelopment centers. By 2014, ABI was able to acquire its first portion of the future Murphy Crossing site – 16 acres of the 20-acre property.

In 2016, ABI initiated an extensive community engagement process and commissioned a study, supported by the U.S. Economic Development Administration, to determine best uses for the site based on the area’s need for economic development, transportation accessibility, affordability and historic preservation.

In 2018, ABI completed its purchase of Murphy Crossing and initiated a Request for Proposal (RFP) process for its sale and redevelopment, to be guided by the extensive community input.

Due to COVID, the RFP was put on hold until 2021. When it was officially re-initiated, ABI directly engaged stakeholders and the broader community to help develop the scope of the RFP.

The resulting RFP sought a developer with an innovative redevelopment plan that would include the creation of sustainable living-wage jobs, affordable housing, greenspace and other program elements that would enhance the surrounding community and catalyze inclusive economic development.

In particular, ABI placed strong emphasis on proposals that included support for neighborhood-based minority entrepreneurs and businesses as well as the preservation of commercial affordability for qualifying area businesses.

“Murphy Crossing is important to my community as a model of economic inclusion, jobs, affordable housing, commercial spaces and walkable retail that has been absent for decades,” said Joel Dixon, principal, Urban Oasis Development.

“Furthermore, this is a watershed moment to have a current Black resident as a joint venture developer for a publicly-owned redevelopment site. The fact that I’m also a legacy resident, who was raised minutes from this site, is a first in the history of a public Atlanta RFP and speaks to the sincerity of ABI to listen to the neighborhood’s voice. It’s a legacy our team intends to honor and hope will extend as the new normal going forward,” he concluded.

The project, which is located in the Atlanta BeltLine Tax Allocation District (TAD), is in the early stages of design and is being refined based on input from the local community.

All Murphy Crossing renders are courtesy of Culdesac.