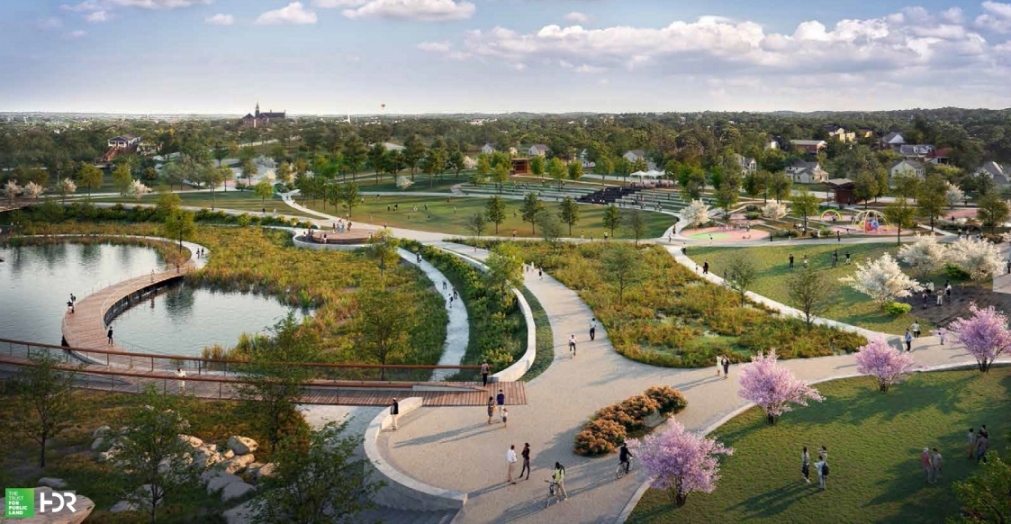 Long-time readers of REVITALIZATION already know that—over the past decade—Atlanta, Georgia has transformed itself from a sprawling national poster child of bad urban planning (or no urban planning) to a model of smart land use. Their approach is focused in large part on the 3Re Strategy (repurposing, renewing, reconnecting), with the Atlanta Beltline being the premier example.

But we’ve also covered their restorative water management initiatives, and there’s more good news on that front, too.

On February 21, 2019, the City of Atlanta Department of Watershed Management (DWM), in partnership with Quantified Ventures, the impact investment firm, and Neighborly, the mission-oriented broker dealer, announced the issuance of the first impact bond to be offered on the public markets.

The $14 million Environmental Impact Bond (EIB) gives the City of Atlanta access to funding for innovative green infrastructure projects that will address critical flooding and water quality issues, reduce stormwater runoff, and enhance the quality of life of Westside neighborhoods that are in the Proctor Creek watershed. The Atlanta EIB issuance was supported by a grant from The Rockefeller Foundation with additional underwriting support provided by KeyBanc Capital Markets and Siebert Cisneros Shank.

“We are thrilled to partner with Quantified Ventures and Neighborly to help pioneer this innovative financing mechanism for Atlanta that will not only finance the construction of green infrastructure benefiting the community environmentally, but also stimulate economic development that benefits the existing community,” said Kishia L. Powell, Commissioner for the City of Atlanta Department of Watershed Management.

Impact bonds are a form of performance-based financing, where repayment is based on how successfully the projects achieve environmental, social and economic outcomes for local communities. The Atlanta EIB optimizes the efficiency of the City’s expenditures for the designated projects by tying the amount the City pays out on the bond directly to benefits related to the volume of stormwater the projects successfully manage.

The Atlanta EIB is the second impact bond to be structured by Quantified Ventures as an actual municipal bond, the first of which, with the DC Water and Sewer Authority, was sold in a private placement. For the Atlanta offering, Quantified Ventures brought expertise in evaluating all aspects of EIBs, which require an ability to translate desired outcomes into financial value that can be priced into a security and develop a rigorous evaluation process.

“What’s exciting is that for the first time, the Atlanta Environmental Impact Bond provides other municipalities with a blueprint for an efficient and accessible financing option for important green infrastructure projects that, thanks to the innovative publicly-traded structure, is more easily replicable,” said Eric Letsinger, CEO, Quantified Ventures.

The City expects the Atlanta EIB to increase its understanding of the long-term performance of green infrastructure projects and their benefits to communities, making it easier for the City to secure funding and plan for future projects.

“Let’s commend Atlanta for pioneering the first publicly-traded impact bond and for laying the groundwork for the next wave of municipal finance focused on social impact,” said Saadia Madsbjerg, Managing Director of Innovative Finance for the Rockefeller Foundation. “Innovative collaborations like this one, between public and private sectors, are critical to increasing investment for social and environmental good, and the partnership between Quantified Ventures, Neighborly and the City of Atlanta is one of the best examples of this evolution.”

Each green infrastructure project was developed to help improve stormwater and flood management and reduce the strain on water treatment systems. Projects consist of bioretention basins in parks and rights-of-way, constructed wetlands, and stream and floodplain restoration.

“We’re proud to have brought to market the first publicly-offered environment impact bond on behalf of the City of Atlanta,” said Neighborly Head of Finance, Lindsey Brannon. “Neighborly is committed to connecting communities with the capital they need and providing investors efficient access to the impactful projects they care most about most.”

An good example of Atlanta’s leading-edge green infrastructure efforts is Rodney Cook Sr. Park (pictured at top) in Historic Vine City. Modeled after the recent successes of Atlanta’s Historic Fourth Ward Park, HDR was hired by The Trust for Public Land to lead its design. This pivotal project represents a collaborative design effort that also involved the City of Atlanta Department of Parks and Recreation, the City of Atlanta Department of Watershed Management, the National Monument Foundation and most importantly, the community.

Vine City has long been plagued by a complex set of social and economic challenges, along with outdated infrastructure and severe flooding. The 16-acre park has been designed to alleviate the flooding by capturing and storing up to 10-million gallons of stormwater, while creating a vibrant community destination and ultimately revitalizing the neighborhood.

Since its heyday, Vine City, an area that served as a catalyst for the Civil Rights Movement in the 1960s and once home to Martin Luther King, Jr., has suffered population loss, disinvestment and crime. Throughout the years, the dramatic increases in impervious surfaces has contributed to flooded streets and homes. Residents of Vine City and English Avenue have been engaged from the early planning stages of Cook Park to help resolve these issues and improve their community.

Cook Park is designed to seamlessly integrate functional engineering features within a programmed park space. Park amenities provide visitors of all ages and abilities with ways to gather, connect and enjoy nature including: A playground, splash pad, aeration fountain, and great lawn, along with a market plaza, multi-purpose courts, and an amphitheater stage.