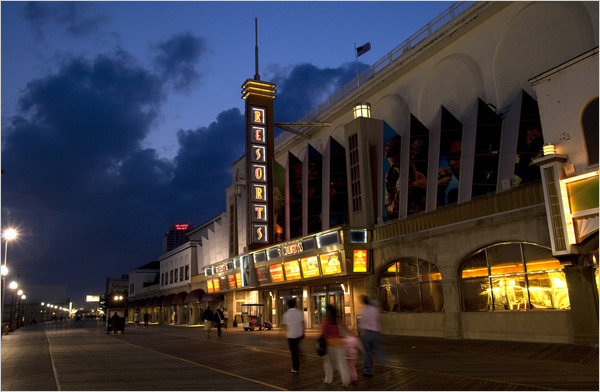 This 2009 New York Times describes the desperate situation of Atlantic City at that time.

Cars and buses cruising down the Atlantic City (New Jersey) Expressway pass billboards promoting “$150,000 Money Madness,” casinos that have “so many ways to spin and win,” and places offering “free buffets on Monday and Wednesday.”

Closer to the heart of the city, where a long strand of casinos sits tight against the ocean, yet another sign proclaims: “Welcome to Fabulous Las Vegas, Nevada.”

The billboard — a promotion by Harrah’s, a casino operator with strongholds here and in Las Vegas that is offering to send frequent gamblers out West — smacks of an underlying and unavoidable vibe in Atlantic City these days: Most people would rather be anywhere else.

Talk about a city with an inferiority complex.

Just a few years ago, Atlantic City was boomtown U.S.A. Day-tripping retirees plunked quarter after quarter into slot machines at the casino warehouses lining the Boardwalk. The city was in the midst of a huge building expansion as casinos invested billions of dollars to build new hotel towers and to dress up fading interiors. Plans for a handful of megacasinos were on the drawing board, promising to bring lots of Las Vegas-style sex and sizzle to this seaside resort.

Today, Atlantic City, in the eyes of one gambling executive, Tim Wilmott, is in a “death spiral.”

All of this is a far cry from the hubbub surrounding the Resorts casino when it opened its doors in 1978 as the first cash cow created by the legalization of gambling in New Jersey two years earlier.

Billed as a “great experiment” in urban redevelopment, legalized gambling was pitched to voters as an effort to reverse Atlantic City’s long decline from a Victorian- and vaudeville-era destination of choice.