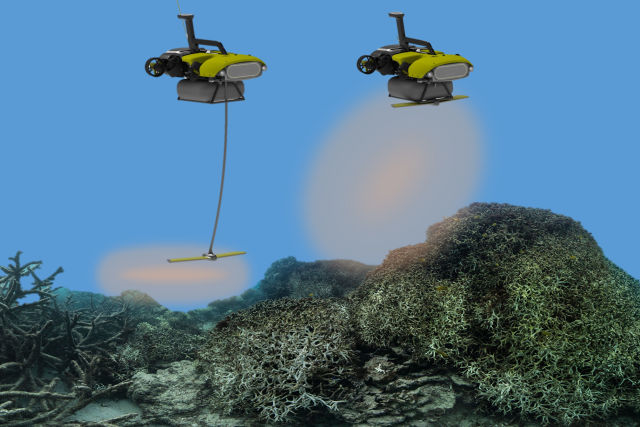 In Australia, an outside-of-the-box idea has emerged for the restorative matchmaking of coral on the beleaguered Great Barrier Reef. Robots–kind of like underwater drones—will deliver new coral “babies” onto the reef.

The concept has won the Great Barrier Reef Foundation’s Out of the Blue Box Reef Innovation Challenge, which brings a $300,000 AUD ($225,000 USD) award to help bring the idea to life.

This proposal to restore coral reefs on a grand scale is the brainchild of Southern Cross University’s Professor Peter Harrison and Queensland University of Technology’s Professor Matthew Dunbabin. Their innovative concept was declared the winner from a short list of five finalists.

The concept is designed to be activated during the annual mass coral spawning event this November on the Great Barrier Reef when corals reproduce simultaneously in spectacular fashion.

Scientists will capture hundreds of millions of coral spawn from the corals that have survived the two recent mass coral bleachings, and rear them into baby corals in mass quantities inside large floating enclosures.

A new generation of robot will then play ‘stork’, delivering the tiny baby coral larvae out onto reefs.

Their plan is to greatly increase the scale of coral spawn that can be leveraged during the Reef’s annual mass coral spawning event and to rear of hundreds of millions of larvae, or baby corals, that will be settled back out on damaged areas of the northern Great Barrier Reef starting in 2018.

This new upscaling approach will allow up to a 100-times increase in the number of coral babies produced as well as better targeting to settle them onto the reefs that most need them.

The result will be a much-needed boost to restore coral reefs on a large scale and speed up the recovery of ecosystems that have been hard hit by coral bleaching and other impacts.

Ms. Marsden added, “The recent IPCC report has reinforced there is a closing window of opportunity for the world to act on climate change and the sharp threat facing coral reefs globally. Our increasingly changing climate underscores the urgent need to fund the next generation of ideas that give our coral reefs a fighting chance and this is exactly what this challenge aims to achieve with the support of The Tiffany & Co. Foundation and partners The University of Queensland and SecondMuse.”

The winning idea has the potential to immediately impact the health of corals across the Great Barrier Reef but also has potential application for coral reefs globally.

Anisa Kamadoli Costa explained, “As part of our support for conservation efforts, the Out of the Blue Box Reef Innovation Challenge aims to kickstart and accelerate novel solutions from around the world to bolster the Great Barrier Reef’s long-term resilience. The Tiffany & Co. Foundation has supported coral conservation worldwide for nearly two decades and we are thrilled to be supporting new ideas to conserve coral reefs—innovators such as the Challenge winners are a reason for hope to preserve these precious ecosystems for future generations.”

The high calibre, and diversity, of the finalists in the Out of the Blue Box challenge presented a difficult decision for the international judging panel of marine, science and innovation experts.

As a result, an additional prize of up to $150,000 AUD will be awarded to the finalist whose idea receives the most support from members of the public. “The finalists range from technical solutions utilising probiotics, 3D printing, through to a behaviour change program with wide-scale benefits,” Ms Marsden said.

“We are delighted to announce that a second novel solution to help preserve our precious coral ecosystem will be funded through the support of The Tiffany & Co. Foundation,” she concluded.

The Out of the Blue Box Reef Innovation Challenge attracted 63 submissions from 15 countries spanning the categories of finance, technology and people. The Tiffany & Co. Foundation’s support for the Challenge was made possible through a grant to The University of Queensland in America Inc.

Rendering of the LarvalBot (an adaptation of RangerBot) by QUT Prof. Matt Dunbabin.

See the Out of the Blue Box Reef Innovation Challenge website.