“What the hell have they done?” is the question a lot of people are asking.

Another botched Spanish restoration: That was the judgment rendered by the Internet regarding the Matrera Castle in Villamartin, Spain.

The restoration of the treasured national monument, reportedly by a local building company, has also angered Spanish historians.

But architect Carlos Quevedo Rojas knew exactly what he was doing. His restoration aimed to “avoid the aesthetic mimicry that involves falsification or loss of value of authenticity,” according to the architect’s design statement.  There were three basic goals, he said: “To structurally consolidate those elements that were at risk; to differentiate new additions from the original structure … and to recover the volume, texture and tonality that the tower would originally have had.”

Short of encasing it in glass, no restoration effort was going to succeed in both saving the structure and leaving it exactly as it was. A muscular intervention may have been the only way forward. 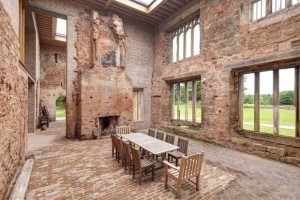 Thanks to an extensive renovation by Witherford Watson Mann Architects, visitors may now book a stay at the site.

The architects gave the structure an extreme makeover. The firm was awarded the Royal Institute of British Architects’ Stirling Prize in 2013.

The difference between these projects, of course, is that one served to preserve the castle’s history—compromise notwithstanding—while the other transformed the castle’s function.