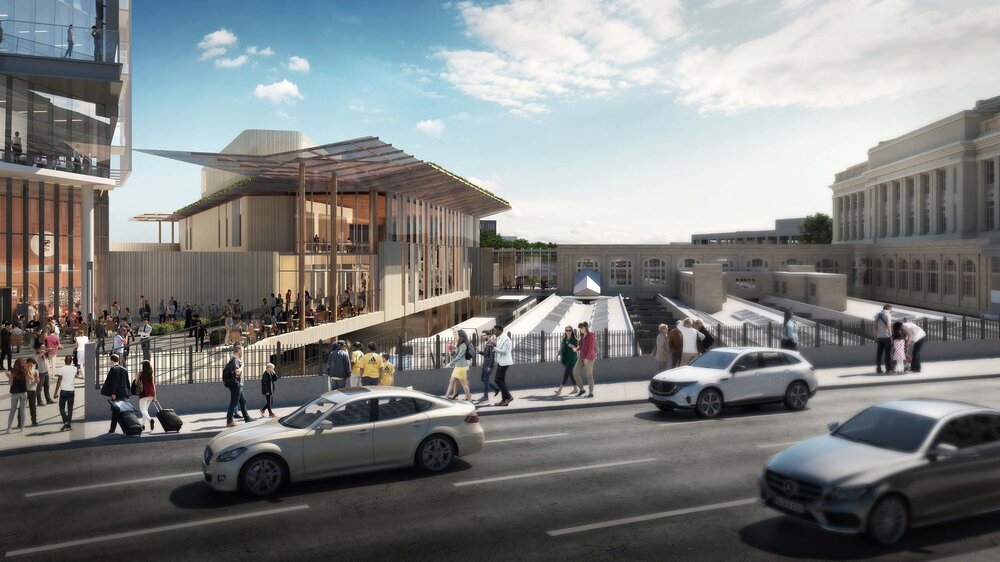 New renderings of the state-of-the-art redevelopment of Baltimore, Maryland‘s historic Pennsylvania Station were recently released by Penn Station Partners, a Baltimore-based team leading the transformation and renewal of the city’s main transportation hub.

Originally built in 1911, the last major renovation of Penn Station was in 1984. 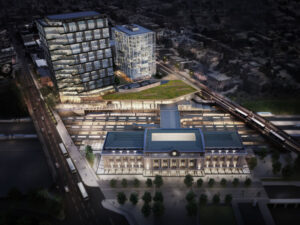 “The redevelopment and revitalization of Baltimore’s Penn Station and the surrounding district is critical to the economic health of the city, especially as we all continue to rebuild from the COVID-19 pandemic,” said Bill Struever, CEO of Cross Street Partners. “We are immensely grateful for the support of Amtrak as we continue laying the groundwork for this project and we look forward to more support from our public sector partners in the months to come.”

Through adaptive reuse, the redevelopment team will respect the historical character of Penn Station while introducing modern sensibility and style. The usable spaces will be programmed with new retail and restaurants on the concourse level, as well as office space on three upper levels.

A repurposed Penn Station will serve as the prominent anchor for all future redevelopment that springs up on the adjacent properties while remaining the lively beating heart of the vibrant surrounding neighborhoods. 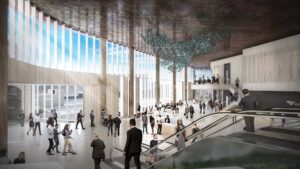 “These latest renderings showcase the incredible potential of Penn Station for the surrounding community, the City of Baltimore, and the entire State of Maryland,” said Michael Beatty, President of Beatty Development Group.

“This transformational project is long overdue, but one that we know will positively impact local Baltimore residents well as the millions of visitors the city welcomes through Penn Station each year,” he continued.

A brand-new station expansion will be connected and integrated with the existing station and with a new planned high-speed rail platform, modernizing station functions and increasing capacity.

Transit functions, such as ticketing and baggage, will be relocated to the new station expansion, freeing up the concourse level of Penn Station for commercial uses. 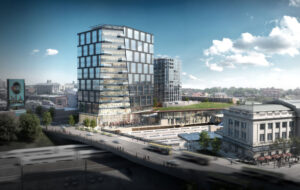 Amtrak has made a significant financial commitment to Baltimore Penn Station with a planned investment of up to $90 million over the next several years.

The first phase of rail infrastructure work at Baltimore Penn Station includes the renovation of an existing platform to bring it back into service, and the construction of an additional platform. 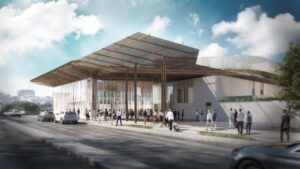 Earlier this year, the team celebrated when Governor Hogan the Maryland General Assembly included $4 million in state funding in the 2022 budget.

Senate President Bill Ferguson, House Speaker Adrienne Jones, House Appropriations Chair Maggie McIntosh, and Senator Cory McCray led the allocation of $3 million to the project, and an additional $1 million was included in the governor’s most recent supplemental budget. This new funding, combined with the $90 million investment from Amtrak, will help ensure the city’s main transportation hub is successfully restored and that construction can begin in the near future.

“The restoration and redevelopment of Penn Station is an important project for Baltimore City and the state, and we are grateful to receive this level of support from the Hogan administration and the General Assembly,” said John Renner of Penn Station Partners at the time.

“This funding will play a critical role in the transformation and renewal taking place at Penn Station and the surrounding communities. Together, with our partnership with Amtrak, we are more confident than ever about the incredible potential of this project, especially at this time when infrastructure investment is at the forefront of the national discourse,” he added.

Originally built in 1911, the last major renovation of Penn Station was in 1984. Penn Station Partners’s master conceptual plan includes the full historic preservation of the station.

“This funding is vital to our success as we work together to restore and reimagine the eighth busiest station in the country here in Baltimore and leverage additional future investments such as the Baltimore and Potomac Tunnel Replacement project,” said Dennis Newman, Executive Vice President, Planning & Asset Development for Amtrak.

“As Amtrak celebrates 50 years of service, we are committed to preserving the historical attributes of the station and surrounding property while modernizing them for future capacity and functionality. We are grateful to the state of Maryland for their support and recognition of the importance of this project,” he concluded.